New Year’s Eve is a chance to reflect on the past year’s experiences and mistakes – and look forward to the glorious clean slate the new year brings with it as the clock strikes midnight. It’s also a time for celebratory cheers, kisses, and outrageous parties around the world as it completes another rotation around the sun. Our resolution is always to go to more festivals in order to spark new connections and make fond memories that will last far beyond the next 365 days. What’s yours? 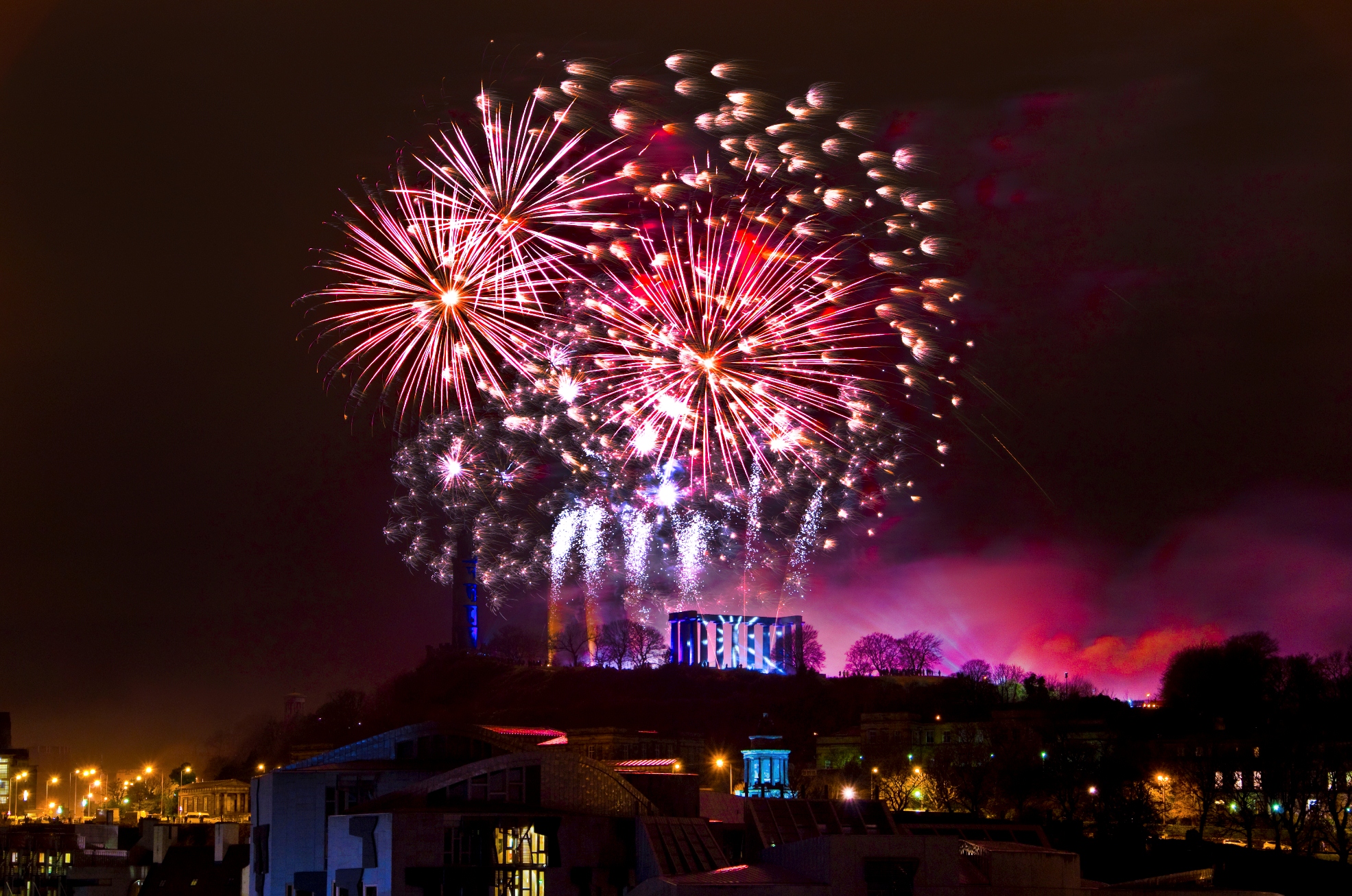 Forget sitting in front of the TV and watching the ball drop in Times Square—the best New Year’s party is happening at Edinburgh’s Hogmanay. From December 31 through January 1, tradition sends many Scots to clean their houses and settle debts, all in the name of getting a fresh start. But that's not all; it follows the Scottish tradition of warding off evil spirits by wielding torches through the city streets. In some parts of Scotland, massive 20-pound fireballs are swung around on metal poles by 60 or so very brave men in a breathtaking spectacle. No matter where you are, however, an ironclad tradition of Hogmanay is the linking of arms and singing of Robert Burns’ song-poem Auld Lang Syne. When night falls and the evil spirits have gone away, the Hogmanay celebration kicks into high gear with fireworks, parties, parades and performances, kisses and hugs all over Edinburgh.

SnowGlobe Music Festival mashes a New Year’s celebration, music festival, and ski weekend into one monumental weekend. Despite below freezing temperatures and a decidedly winter wonderland vibe, SnowGlobe brings the heat to South Lake Tahoe's snowy slopes by stacking its lineup with widely known DJs and top-level hip-hop artists. The entire festival (with the exception of the Igloo Stage, which is enclosed and heated) takes place outdoors, so festival-goers come bundled in their toastiest festie gear and ready to warm up by dancing up a storm. But it's all worth it; how many times can you say you got to ski all day and then watch Dillon Francis, Porter Robinson, Travis Scott, or Zedd (all of whom top this year's lineup) under a winter sky full of stars reflecting off the crystalline waters of Lake Tahoe, surrounded by tall, snow-draped Evergreens towering over the stages, with powdery peaks looming in the distance?

As the year draws to an end, the worldwide celebrations begin. Rio Réveillon – held on Rio de Janeiro’s iconic Copacabana Beach – is the absolute largest New Year's Eve beach party, with about 2.3 million people congregating together to ring in the new year. With all your New Year’s basics (epic fireworks, alcohol, parties) combined with unique traditions borrowed from the city's diverse array of cultures, Rio Réveillon is unlike any other NYE celebration. Food is a must because here, it symbolizes love. Music and wild dancing get the party started. And the most iconic sight at Rio Réveillon is the strict, all-white dress code that symbolizes purity, peace, and renewal with touches of red, green, yellow, and blue –but never black! The icing on the NYE cake is the 20-minute display of pyrotechnics that begins as soon as the clock strikes midnight.

AFROPUNK FEST takes place in Brooklyn, New York, Atlanta, Georgia, Paris, London, and now Johannesburg, South Africa, its newest edition which falls on New Year’s Eve. This vibrant festival revels in diversity and identity by celebrating black culture through music, film, visual art, storytelling, and activism. Johannesburg's inaugural lineup is filled with groundbreaking icons and emerging talent, such as Solange, Petite Noir, Laura Mvula, and Anderson .Paak and the Free Nationals. With a focus on creativity, confidence and self-expression, it’s more about how colorful you are than what color you are. This is a festival that will inspire New Year's resolutions that go far beyond all the tired clichés; AFROPUNK FEST is all about staying woke and leaving the world a better place in its wake.

Photo by: Lights All Night

While Lights All Night takes place on the Friday and Saturday before the ball drops, it is still a contender for a solid New Year’s plan. The completely indoor festival takes place at Dallas Market Hall, so attendees can wear their rave attire without freezing. Lasers shoot through the air while wall-to-wall LED screens framing the behemoth stage showcase crazy visuals flowing to the heart-pounding music. Heavy hitters like Bassnectar, Porter Robinson, and Marshmello will be controlling the crowd from the mainstage, but two other stages host local, up-and-coming DJs and the always fantastic silent disco.

Interested in Lights All Night? Get VIP for the price of GA or 50% off GA with Everfest Premium.

Insomniac-hosted Countdown NYE takes over San Bernardino's NOS Events Center for a New Year’s Eve celebration of epic proportions. As one of its biggest events, Insomniac rounds out the year with a bang by hosting over 40 electronic music artists across three stages. Each of the stages pack a unique flavor: The Resolution Stage hosts the headliners, the Infinity Stage pumps trap, bass, and house, and the Continuum Stage hits the lower frequencies of trap, bass house, drum & bass, and dubstep. Like other Insomniac events, art is an essential aspect of the experience, so attendees can truly escape in this dazzling, LED-infused winter wonderland with plenty of heated Zen Zones that feel like a chill pill between sets.

As the Earth ccompletes its final rotation around the sun, Sunburn engulfs Pune, India, for four wild days of electronic music. Over 150,000 attendees gather to ring in the new year together and enjoy Sunburn's lineup of internationally known DJs specializing in a variety of genres (like house, trance, techno, and other genres under the EDM umbrella) to perform on its one massive stage. When festival-goers aren’t dancing, they can peruse the shops within the festival and pick up authentic Indian goodies, or get a birds-eye-view of the festival atop the Ferris wheel.

Decadence NYE takes place in Colorado and Arizona, yet it boasts different – but equally incredible – lineups chock-full of EDM . To ring in the new year while avoiding the frigid winter air, each festival takes place indoors and spans two stages (and a silent disco) for two revelatory nights. Keep in mind that this isn’t an artsy, conscious gathering – it is a massive rave filled with kandi, glow sticks, and PLUR vibes. But really, what's better than beginning a new year ecstatic and sweaty from dancing for hours? Decadence is an adults-only utopia that allows festival-goers to escape the anguish of the past year, rejoice in happy memories, and start 2018 with a fresh perspective. As 2017 turns into 2018, revel in the exquisite production and the myriad mystical performers while boogieing the night away.

Minnesota may be one of the coldest places in the country in December, but relative newcomer Snowta NYE is ready to heat things up as it enters its second year. With an excellent lineup consisting of rap stars, renowned DJs, and upcoming talent, attendees will want to check their coats at the door, and get ready to dominate the dance floor. Bass-heavy DJs like Excision and Liquid Stranger will make your heart shake, while the melodic sounds of Pretty Lights will bring you back to center. Fulfill your teenage dreams at the arcade, skate park, or laser tag, and then catch Gucci Mane and Post Malone when you're ready to feel the bass in your bones.

Pssst… Get VIP for the price of GA, 50% off GA, and more with Everfest Premium.

Universo Paralello translates to “parallel universe” in Portuguese. It’s the best, most concise way to describe the feeling of this utopian music and arts festival that transforms a New Year’s Eve celebration into a ten-day psychedelic, trance music affair along the Brazilian coast. Pratigi Beach remains untouched by tourism and the remoteness adds an idyllic touch to the entire festival. For those unaware, trance music is less about the name of the artists and more about its transcending nature (hence the name) as it's meant to curate a dreamlike state in its listeners. Throughout its ten days, the festival transforms into an exquisite village full of diversity, community, shops, food courts, and unprecedented vibes to welcome the new year.

New Year’s is a celebration around the world with countless festivals and parties to attend. While we narrowed it down to ten of our favorite festivals, you can find a celebratory event at any location. Sift through our complete list of New Year’s festivals pulled from our database of over 16,000 festivals here.