10 Musical Legends on the Northern Nights Lineup You Should Know

Headed into its sixth year amidst the majestic redwoods Piercy of Northern California’s Emerald Triangle, Northern Nights Music Festival is a budding event with energizing yoga, homegrown art, choice beats, the finest local cannabis. In past years the intimate gathering has brought together major headliners and the best of what Humboldt and Mendocino Counties have to offer, and although the full lineup hasn't yet been released, we can already tell from Phase 1 that this year at Northern Nights is packing heat.

While there are plenty of emerging, buzzed-about artists on the lineup, this year is accentuated by stone-cold legends topping the bill – the sort whose back stories and onstage energy aims right for all the feels. 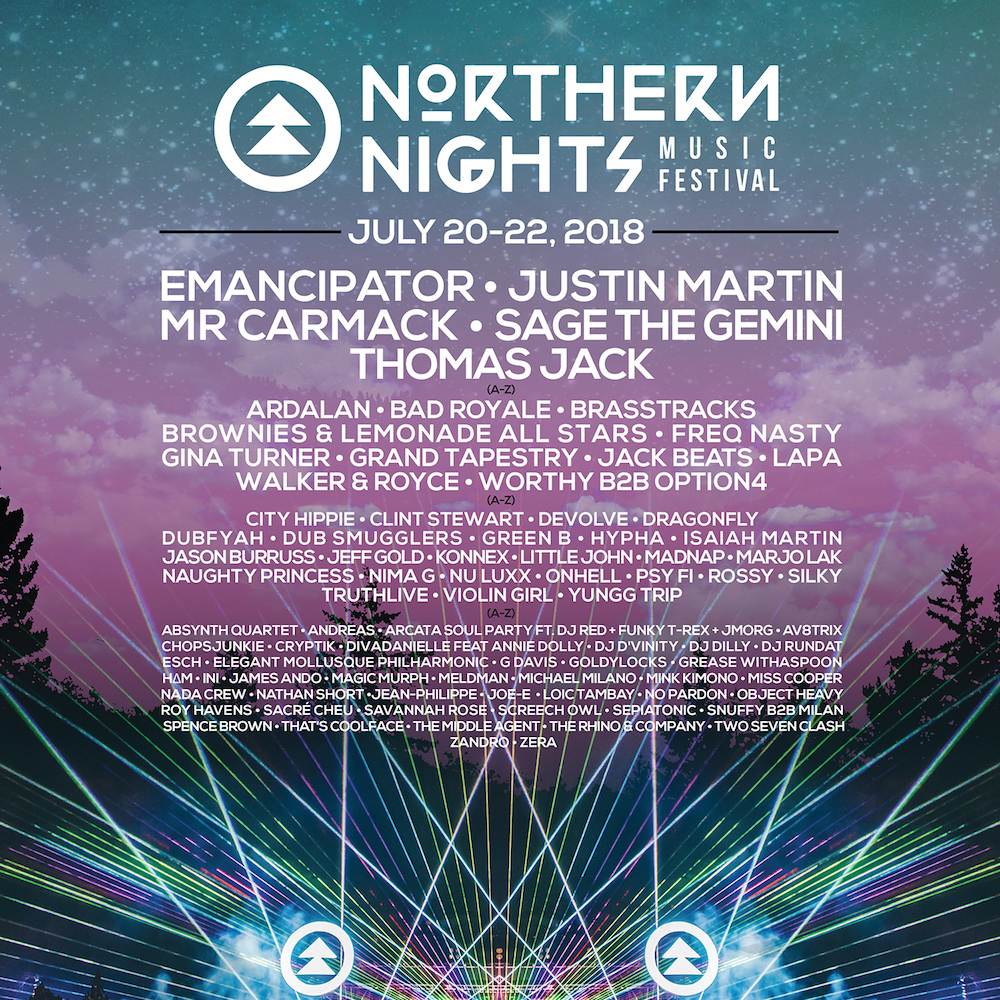 Want to know which legends on the lineup are stoking the most FOMO this year from July 20-22 at Northern Nights? Read on!

The Legend: Respected for his authenticity as much as his style, Aaron Carmack, who's billed as “Mr Carmack” but known to his friends simply as “Carmack,” started from humble beginnings making beats in San Francisco. He dropped out of college to live for three years in Oahu, Hawaii off his monthly Bandcamp releases, eventually becoming one of the first few perennial fixtures in the music scene to break down barriers between hip-hop and dance music cultures.

The Legend: DJ Gina Turner’s love of succulent house tunes is only matched by the love she puts into her yoga practice. Known for both pursuits internationally as well as for her radio shows on 88.9 WERS and 99.9 WECB, Gina has never taken her foot off the gas in her life or career. While she's enjoyed her status as a hero in her hometown of Boston for some time, she's now expanded to melting hearts and blowing minds with her off-beat jams. This year her Northern Nights set is expected to be one of the most dreamy and triumphant moments of the weekend.

The Legend: Most people are accustomed to seeing him serving up tacos at Bonnaroo, bagels at Coachella and bacon at Envision Festival, but after almost a decade trading his way onto stages with heaping plates of delicious festival food, Ben "Grease Withaspoon” Ramos will make his second full-fledged appearance on a festival lineup stateside. As a known talent in the underground scene in Los Angeles, Withaspoon is the raspy alter ego to Ramos's "space hop" persona, Astr0n0t, who is a mainstay at Synaptik Events Bass Waffles. When not dazzling the crowds, he'll be serving up fresh cheese curds all weekend long at Northern Nights, courtesy of the delightfully euphemistic folks at Poutine in Your Mouth.

Name of Artist: Brownies and Lemonade

The Legend: When co-founders Kush Fernando and Jose Guzman first started throwing parties in college they quickly developed a knack for themed events and booking breakout trendsetters. Frequent surprise guests and a firm commitment to making space for music that deserves to be heard (as opposed to what is already topping charts), solidified their reputation from street-smart party throwers to world-class curators. As B+L has risen to acclaim, the duo has transcended those house party origins and gone on to dominate the warehouse scene, and today is an established force selling out major venues.

The Legend: If Dirtybird were an army, Justin Martin would be a commanding general in the top brass. Once a regular at the local pub where his brother, Christian Martin, worked, Justin met Barclay Crenshaw when they were both looking to spread their wings. Together they hatched the plan for Dirtybird Records, so that while “Claude” grew to be a cult fixture in Europe and the U.S., Justin evolved to be a pizza-lovin’ everyman, who is part alien, part unicorn, and all spirit animal.

The Legend: A classically trained violinist originally from Perm, Russia, Ilya Goldberg aka “Lapa” came to the U.S. in 2000 and stayed to study at the Cleveland Institute of Music and eventually establish himself in Portland, Oregon. Despite never living in a major U.S. hub of entertainment or music culture, Lapa has been called “The Future of Classical Music” for his trance-inducing, angelic blends of orchestral live instruments and electronic sounds. He’s known widely for his ethereal, live violin performances alongside Emancipator (who is also on the Northern Nights lineup!), in addition to collaborations with Devotchka, Random Rab, Lynx, Rena Jones, The Human Experience, Jamie Janover, Future Simple Project, and Trans-Siberian Orchestra. You definitely don’t want to miss his solo show.

The Legend: There aren’t many duos in the house music scene at the caliber of Brooklyn-based friends Samuel Walker and Gavin Royce. They garnered huge wins almost immediately after initially teaming up in 2000. Damian Lazarus connected with Walker & Royce after hearing their remix of SAARID’s “Future Lately,” while at about the same time the pair dropped a track called “Connected” which went on to become an unofficial anthem in Ibiza. Today, their music is a cornerstone in acts at the largest festivals in the world, from dynamite headliners like Claude VonStroke, Gorgon City and Eats Everything.

The Legend: When the headiest festies start talking bass music it usually doesn’t take long for one of them to bring up the humanitarian efforts or the technical prowess of FreQ Nasty. While he was born in Fiji and raised in New Zealand, FreQ Nasty actually sharpened his chops in Europe and, once established, quickly started finding ways to give back. He’s raised money for a variety of causes, including Tibetan people’s rights, safe drinking water in Ethiopia, and rebuilding homes in Haiti. He also is one-half of the Dub Kirtan All Stars, alongside Burner bass god David Starfire. Today, FreQ Nasty experiments in “Yoga of Bass,” which uses the futuristic SubPac – a wearable soundsystem – as a means of enhancing the experience and benefits of ecstatic movement.

The Legend: Distinguished as perhaps the most senior music producer on the Northern Nights lineup this year, Martin Andrew aka Dragonfly is an unstoppable festival all-star. He’s frequently credited with introducing breakout and top acts to the west coast music festival scene, but it’s really his breakneck pace and endless list of contributions behind the scenes at festivals that make him such a celebrated figure. Today, his list of accolades and signature dance floor vibes have garnered him massive support, proving that in addition to being the kind of guy who can take on Stage 3 cancer and win, he’s also the sort of leader who can bring out the best in people when he calls on them.

The Legend: For anyone sleeping on divaDanielle, let this be your wake-up call. The house music heroine of Burning Man’s Camp Charlie makes "music for unicorns," but that’s not all that makes divaDanielle the queen of disco-fied, booty poppin’ bass that she is today. Her shimmering rhythms and bubbling beats consistently turn heads at events like Lightning in a Bottle, Boogaloo Art Car and Music Festival and Coachella (at Do LaB Stage), but when she throws down it’s her gallant pack of unicorns that demonstrate the panache and power that puts divaDanielle way over the top.