The biggest, best and most brilliantly blazing art installations of Burning Man 2017 are already being built. We’re here to fire you up with a sneak preview of the most mind-blowing and hypnotic playa art projects with exclusive commentary from the artists and collectives building them.

How do we already know these installations will be Burning Man favorites? Because Burning Man selected them as favorites when Burning Man Arts chose 75 specific projects from 17 different countries to receive nearly $1.2 million in their 2017 Burning Man Honoraria Grants. Allow us to introduce you to a handful of these artworks that are sure to dazzle huge crowds of playa admirers, with some exclusive advance looks at prototypes the global Burner community has never seen before. 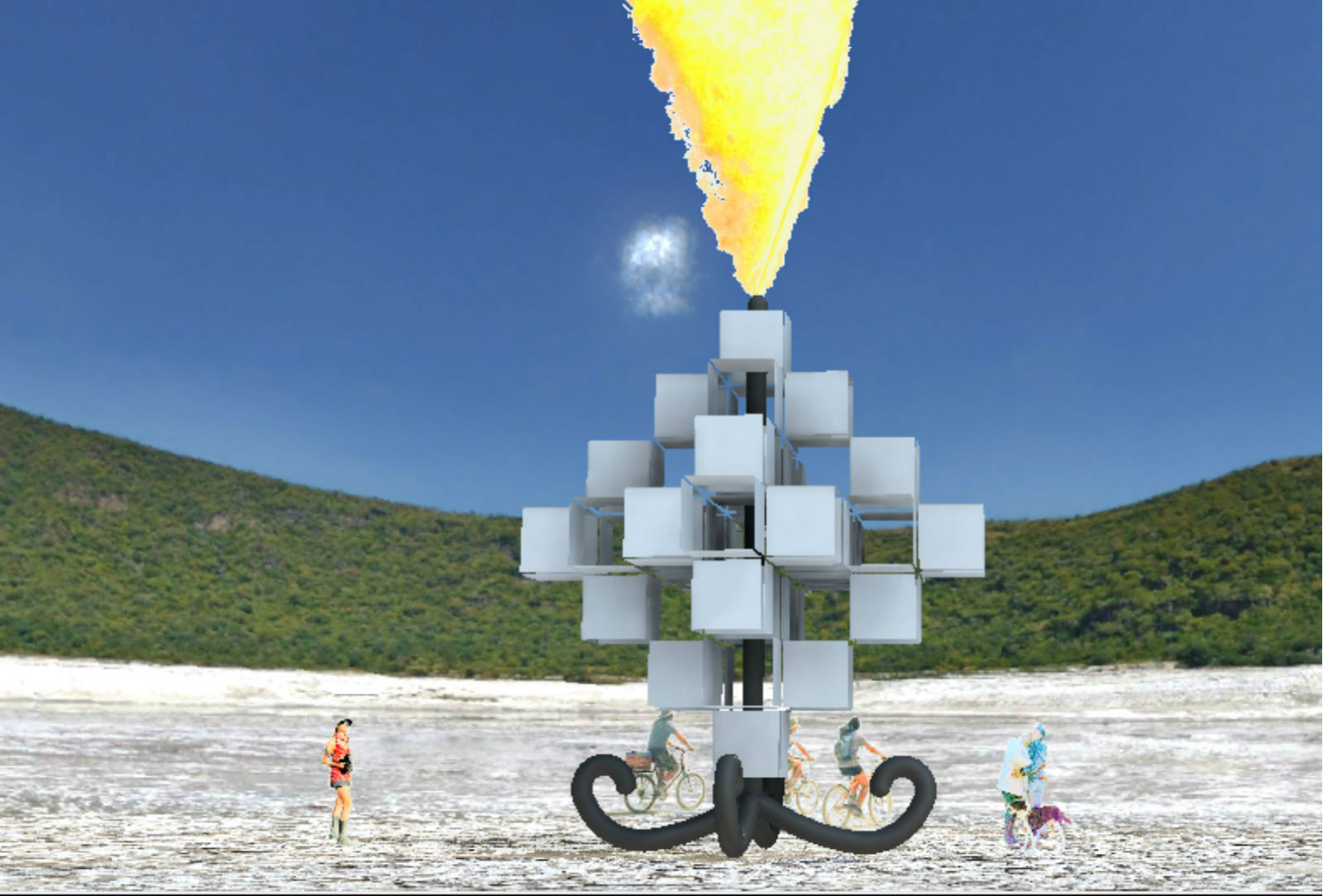 Our dearly beloved Flaming Lotus Girls have fired up nearly a dozen different Burning Man projects over the years, but their 2017 offering NOETICA will be a world-premiere debut. It’s still under construction, but can be daydreamed upon in the prototype seen above while the Flaming Lotus Girls pipe, solder, and build propane gas lines to make this thing a reality.

“Imagine a square of steel that’s two feet by two feet. Now imagine 144 of those,” says Flaming Lotus Girls designer Gregg Adams (yes, the Flaming Lotus Girls do admit men they deem useful). Words cannot do justice to how these 144 squares will interact together, but the prototype video below explains it pretty well.

“They’re all put together with hinges such that when you move one of the cubes, all of the cubes move,” Adams explains, noting that a 20-foot high structure will suspend these cubes above the ground while Burners passing by operate them via joystick. “At least two people have to communicate and cooperate to get the piece to move in a way that is sinuous and sensual. And once it starts to move in that direction, we will reward them with flashing lights and fire features that will erupt on the larger piece.”

Many a Burning Man night has been spent marveling at the strobe-lit, stop-motion zoetropes of Peter Hudson. 2017 will see the return of his tour de force, the boat-rowing skeletons known as Charon.

“Charon has a very special place in its crew’s hearts,” Hudson tells us. “It is meant as a poignant bon voyage to loved ones, and invites participants to engage in that shared sense of loss and release.” 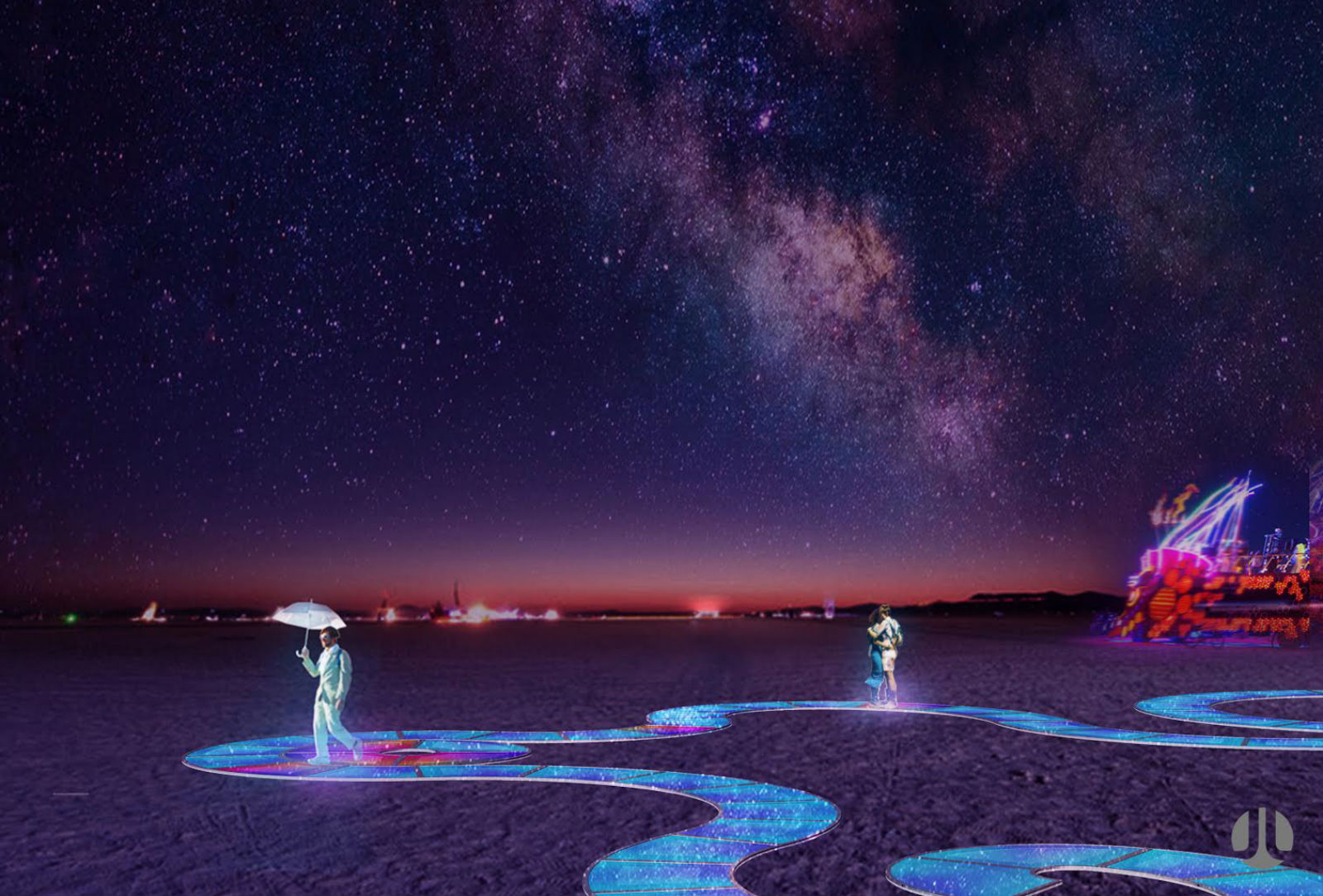 You may have seen Jen Lewin’s illuminated walkways The Pool and Super Pool embedded in the playa in years past. Her 2017 project Aqueous will add a special daytime magic by using a reflective dichroic surface to produce remarkable effects with the sunlight.

“I have a desire to engage communities in their physical environments and without the impediment of screen-based communication,” Lewin tells us. “My goal is to create a human-connected experience where participants not only interact and enjoy the playfulness of the work but, more importantly, also interact and connect with each other.”

Flight of Illumination by Iron Monkeys 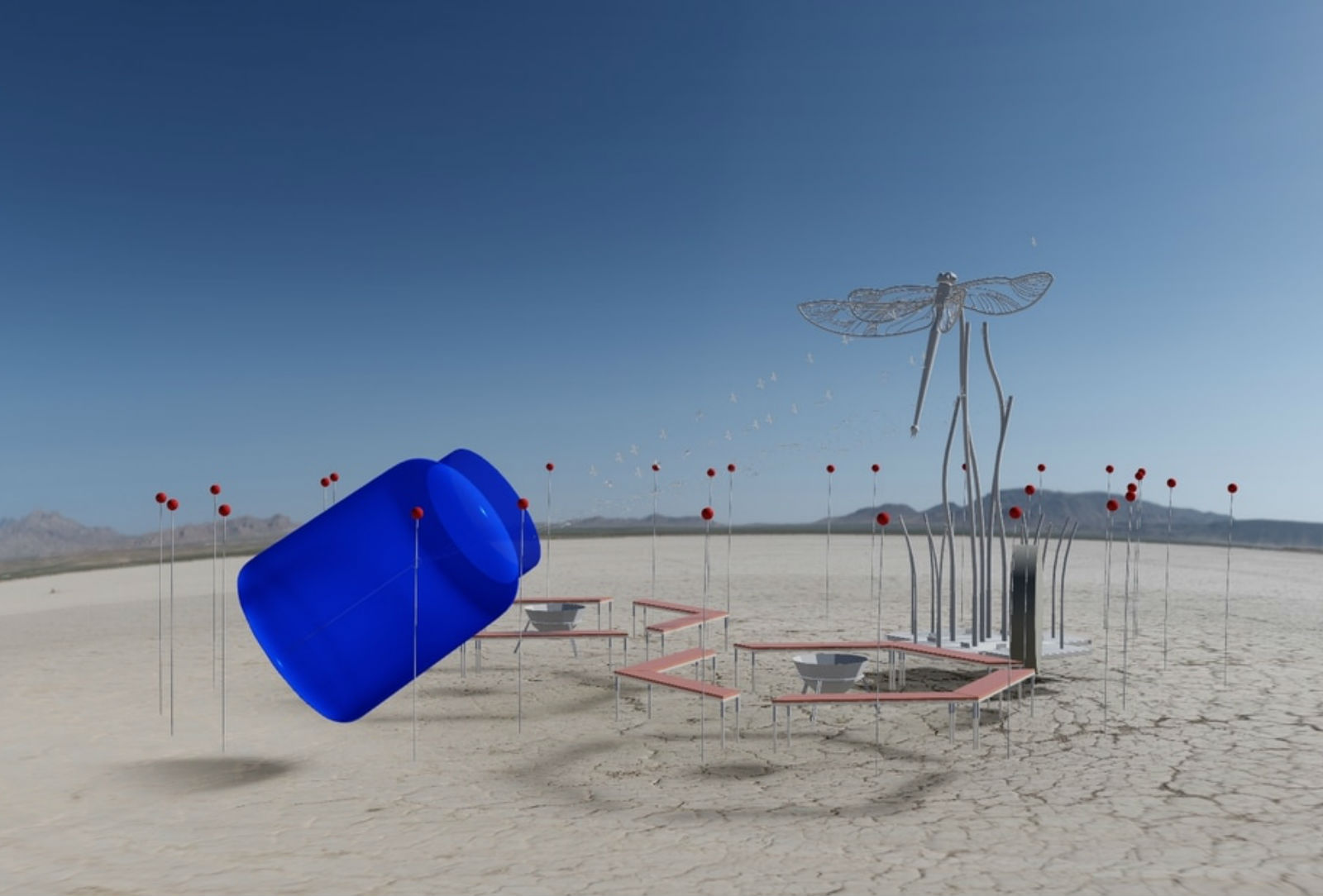 That jar in the rendering above will release dragonflies across the Burning Man sky when longtime Burner art collective Iron Monkeys creates their flame-breathing animated dragonfly installation Flight of Illumination. Little handcrafted steel dragonflies will fly out of the giant jar, some illuminated with LEDs and others with fire, while a lovely seated, central chill space allows you to take it all in. Naturally, fire will emerge from the 12-foot standing dragonfly overlord, who will also be adorned with decorative blacksmith work. 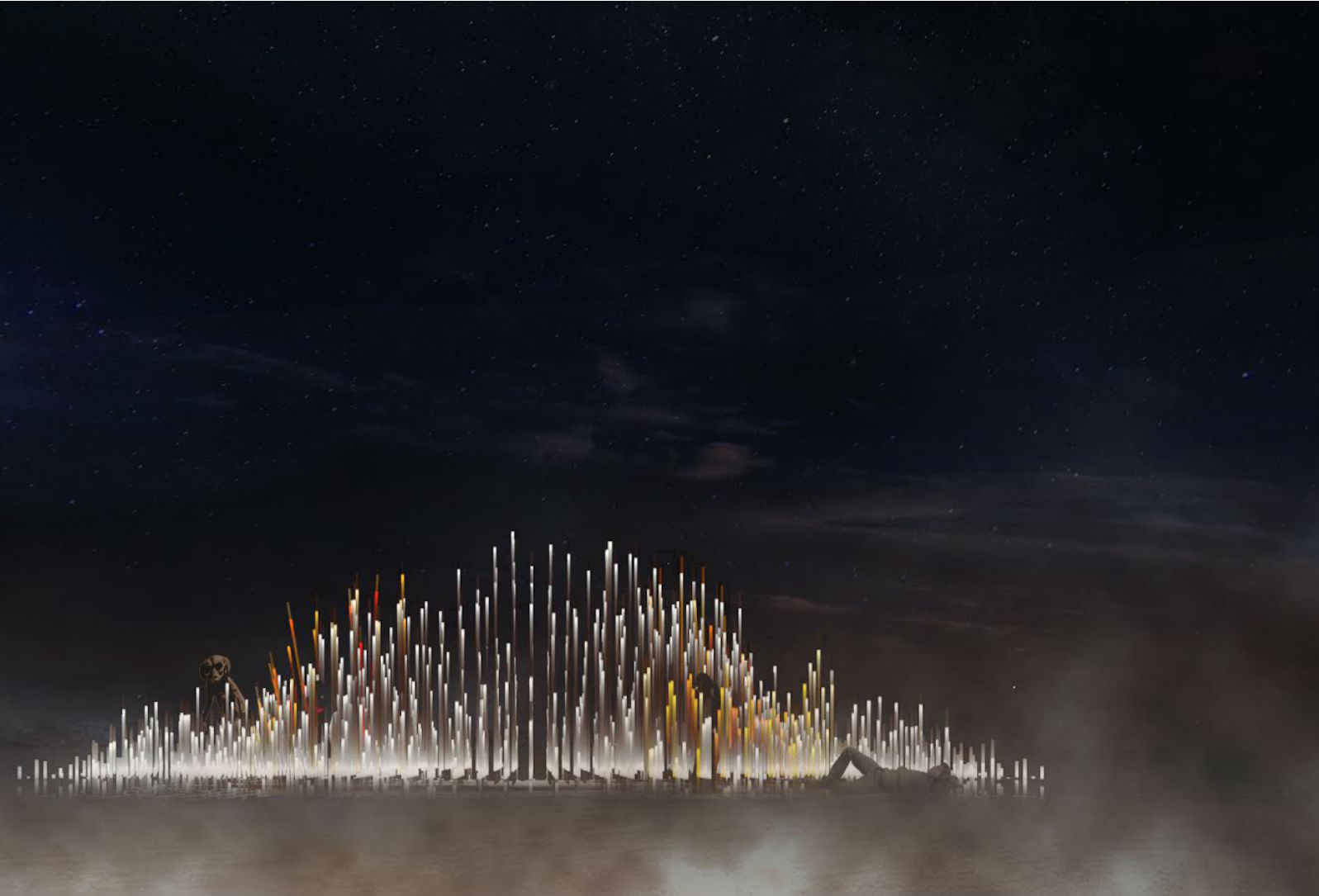 You can get some sense of what Westminster University London architecture masters student Eleanor Cranke is planning from the side-view rendering of Celestial Field above. But this animated imagining from overhead shows off the project’s real dazzle.

“For Celestial Field I was inspired by the sun,” says Cranke, who will be making her first-ever trek to Burning Man — or to the U.S. for that matter. “As an object it has been worshiped as a distant god and celestial being. It has risen and set, bringing with it heat and light; powering life on earth since the dawn of time, a focus of incomprehensible wonder and fascination for each and every culture across the globe. Celestial Field will bring this experience to the surface of the earth in Nevada.” 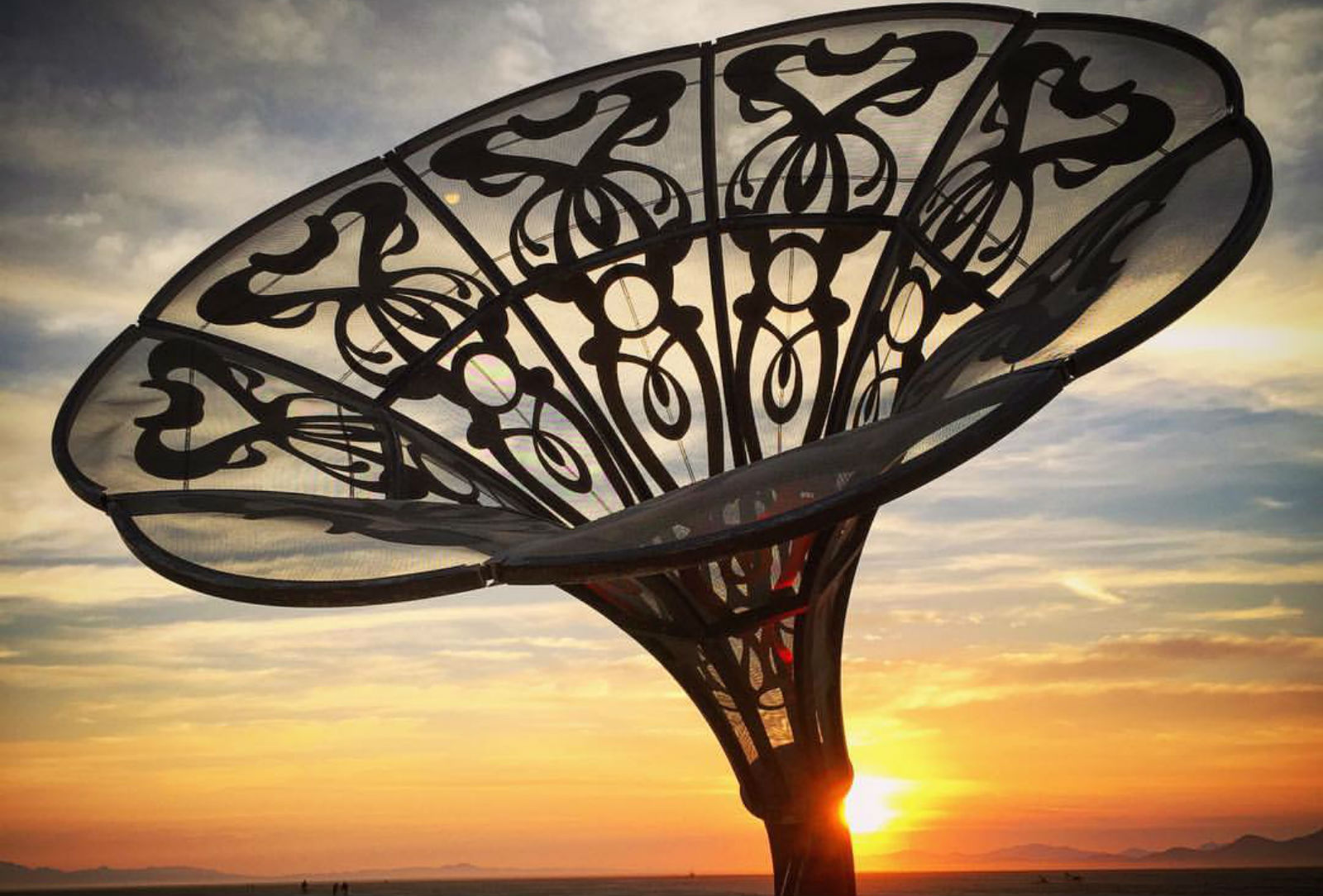 Last year’s celebrated, giant-scale vintage gramophone La Victrola has become a favorite in its native Bay Area, with appearances at Precompression and the Oakland Museum, plus upcoming displays at music festivals in the works. But the old-school record player replica is ready to spin a new style for Burning Man in 2017.

“This year the plan is to actually raise the horn up off the playa and put the whole cabinet box underneath it,” says Nick Fynn of the La Victrola team, describing a new, nine-foot-tall interior area that will serve as a chill space and shade structure. “It will be physically representative of what an old-school gramophone really looked like.”

“We will travel thousands of miles from Amsterdam to the Nevada desert to lock ourselves up in a big black box and never see our surroundings,” schemes the Amsterdam artist who goes by Dadara, whose infamous 2014 Facebook Like button sculpture Like4Real inspired amusement and debate. But for this year’s Solipmission his crew will remain inside a giant black box and paint an immersive 360-degree mural of what you Burners tell them you see — through their outposts of virtual reality cameras stationed around the playa.

“At the moment VR, just as a lot of other disruptive technologies, seems to be mainly business and tech driven. But technology is not just about business and data,” Dadara explains. “Projects like Solipmission are important, as they get artists involved in this evolving technological movement. Not for just adding cute colorful figures, psychedelic beautiful backgrounds, or great looking designs to the finished product, but to truly rethink what virtual reality is about.”

We’d love to tell you about Deep Creek Experimental bringing back their 2007 project Fire Spinner. But it’s more interesting if we tell you how they dragged it up a 10,000-foot mountain at this year’s Telluride Fire Festival.

“We had to put it on a Snowkat and do it after hours,” says co-creator Anton Viditz-Ward. “The night of the burn it was a full-on blizzard blowing sideways, like 40 mile an hour winds. It was a real challenge trying to get the thing lit. It was ten degrees out.” 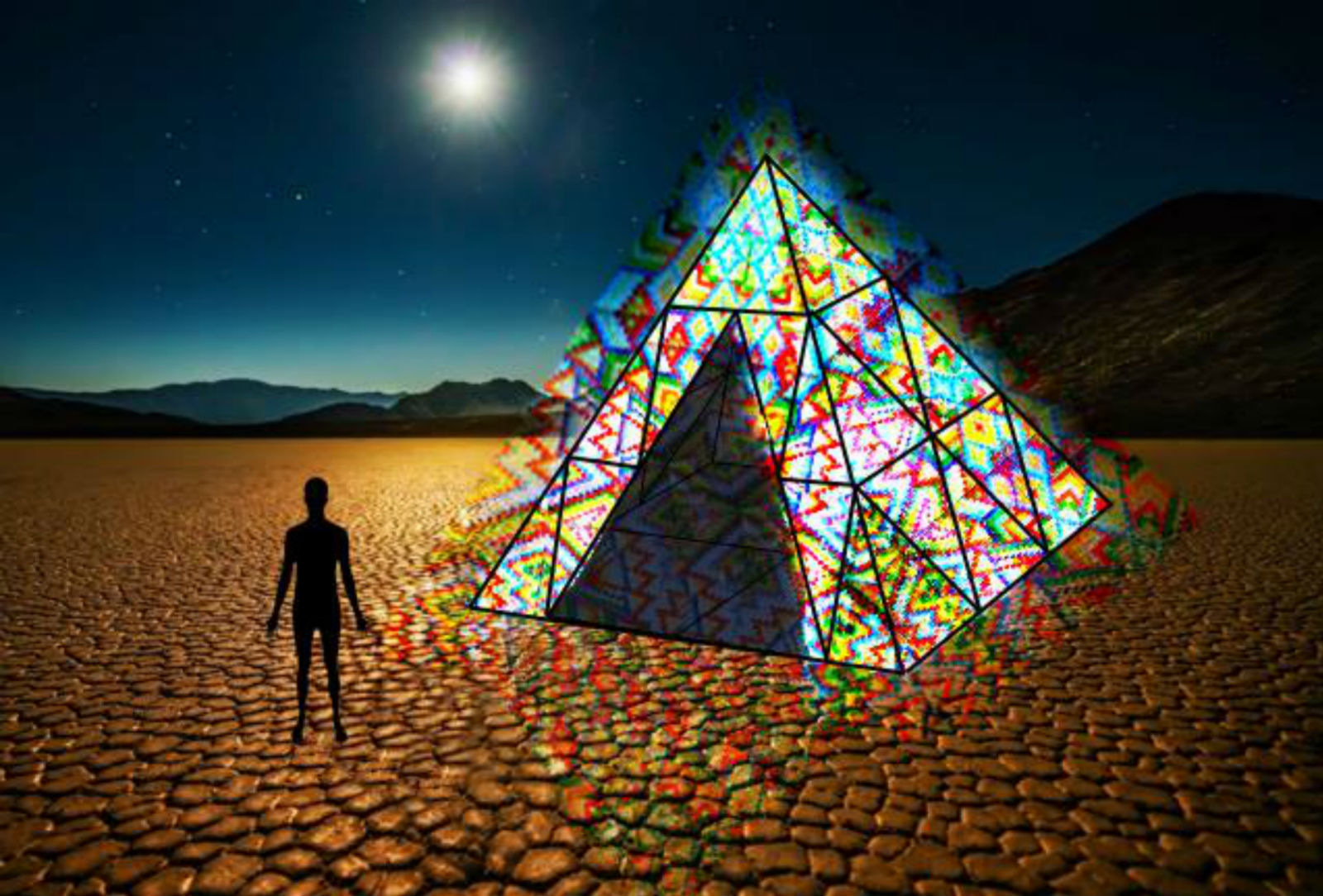 Yes, the Gummie Bear Mandala Pyramid is exactly what it sounds like — except the gummie bears won’t be the real candy versions. “I’m hand-casting approximately 111,000 gummy bears versus using real ones,” says the creator Dicapria. “Mostly so they won't melt, fade in the sun, won't have to use gelatin and can use more colors.”

“I created an art series of gummie bear mandala light installations a few years ago, and building this 12-foot tall pyramid is more of an extension of that art series,” she explains. “In time it has transformed into a form of time machine. A place that invites you into an illuminated fort of nostalgia.”

A 15-foot double tetrahedron will host nine different synchronized flame balls on Torch Song, whose Indiegogo crowdsourcing video is seen above. Torch Song is donating 10% of these donations to the ACLU.

“The tetrahedron represents fire in the Platonic ontology,” explains designer Matthew Gordon. “The double tetrahedron, balanced precariously on a corner, gives the piece dynamism and symmetry by pointing at both the cosmos and the earth. Or something like that.”

The Solacii by Tigre Bailando 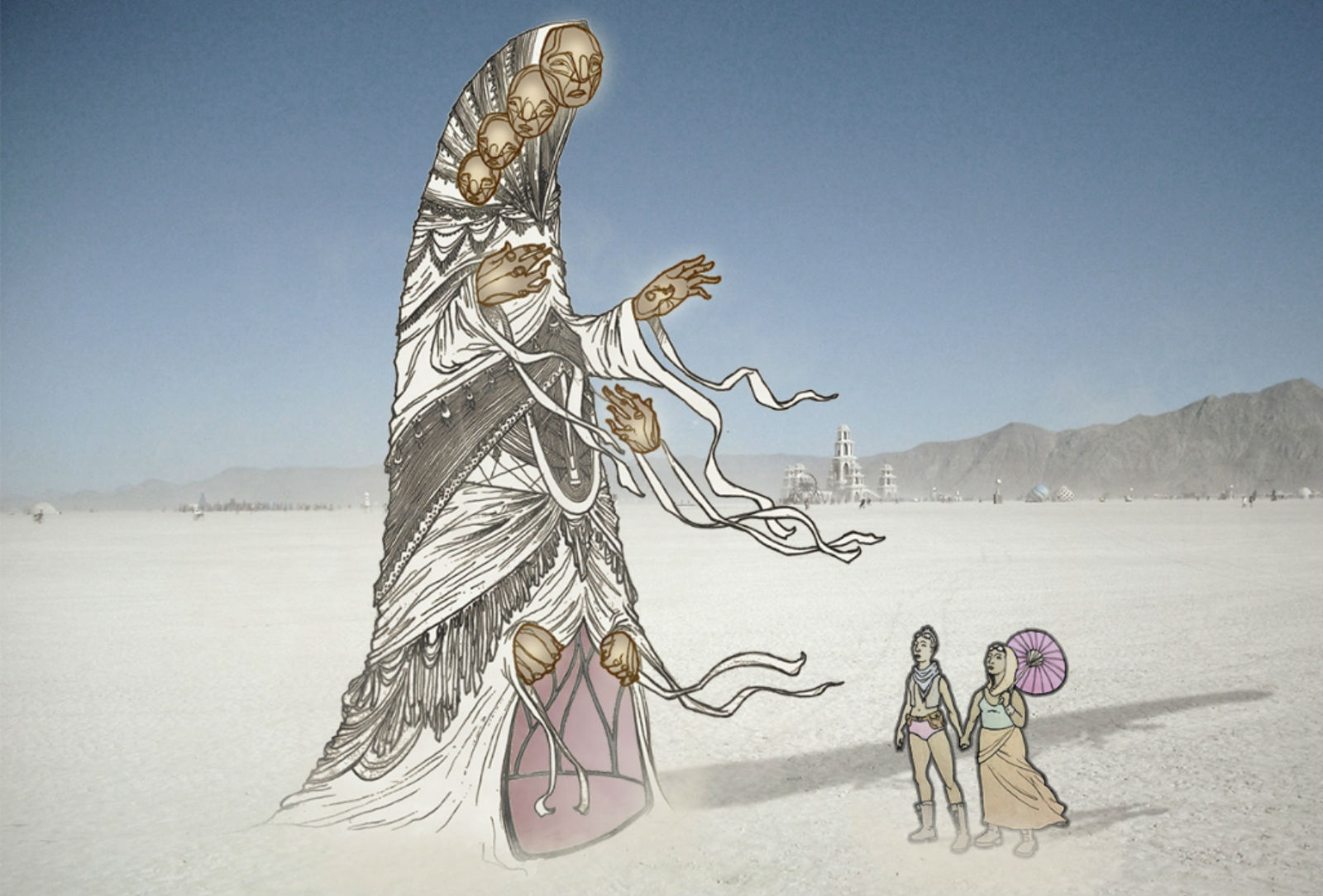 Tigre Bailando’s spiritual sculptures have been seen at Lightning in a Bottle and Electric Forest, and his towering 20-foot tall The Solacii is a new piece he’s creating with longtime collaborators Bad Unkl Sista for Burning Man 2017

“The mysterious being is clothed in an intricate dress crafted from personal garments and heirlooms gathered from the community — symbolizing the collective memories, stories and experiences of the human race,” Bailando writes. “Both cozy and cathedral-like, the inner sanctuary offers a space for solitude and intimate gatherings, a home for meditation, deep conversation, and personal ritual.” 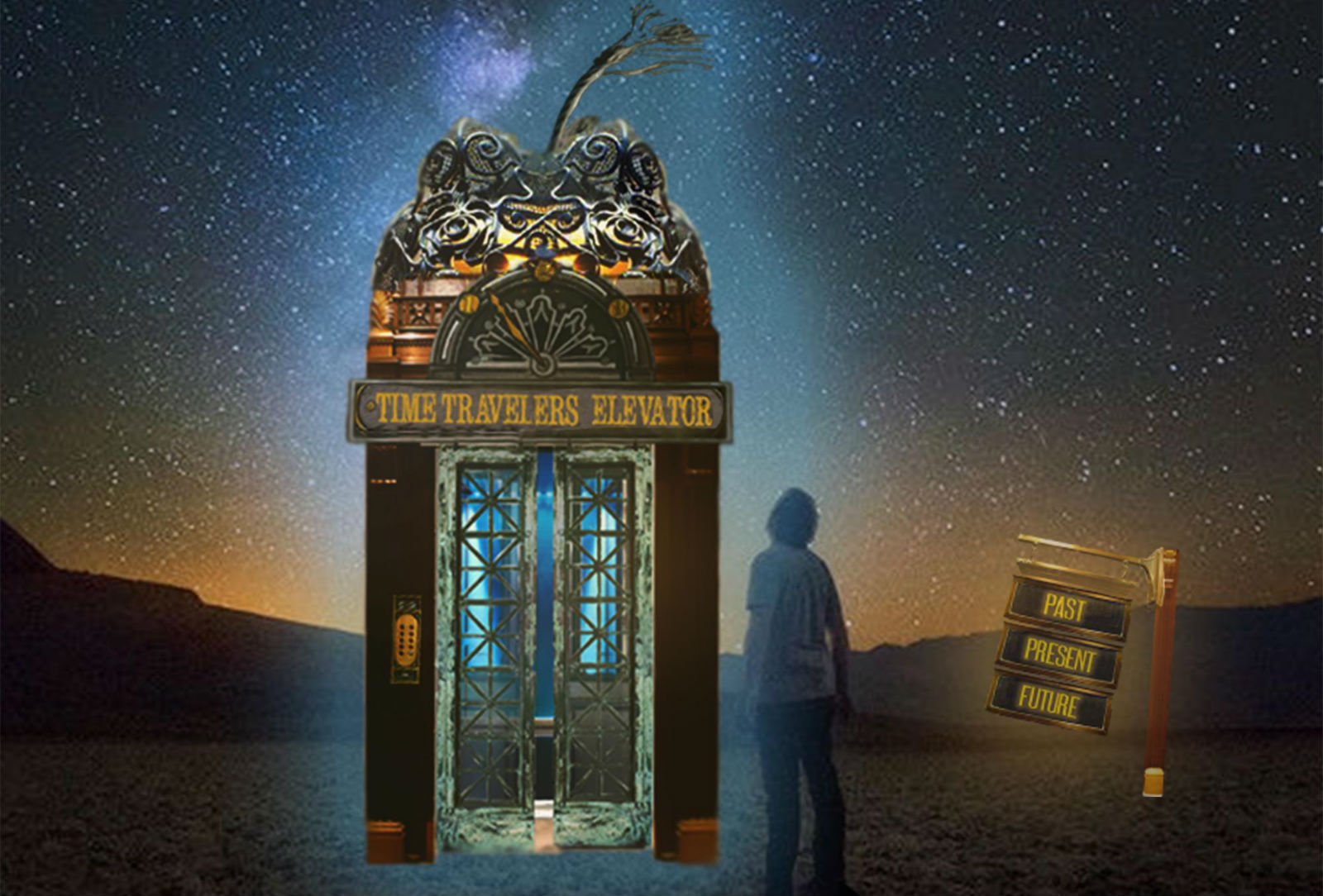 It takes a special kind of dedication to build an elaborate art installation way out at the trash fence. But that’s exactly what artist Josh Yeo has in mind for Time Machine Elevator, a 1930s Art Deco elevator cab with working doors and a handcrank that does promise actual time travel. So why stick it way out at the far end of Deep Playa?

“Because it would work best with smaller groups, two stragglers wandering out who stumble on it on Deep Playa somewhere...it would work best with two to four people,” Yeo explains. “There’s a whole other side of interactivity that’s involved with actual time travel, and at nighttime it transforms into a different piece. We’ll have heavy LEDs.”

Yeo also noted that he would surely regret having to bike out to the trash fence several times daily to perform maintenance on his piece. 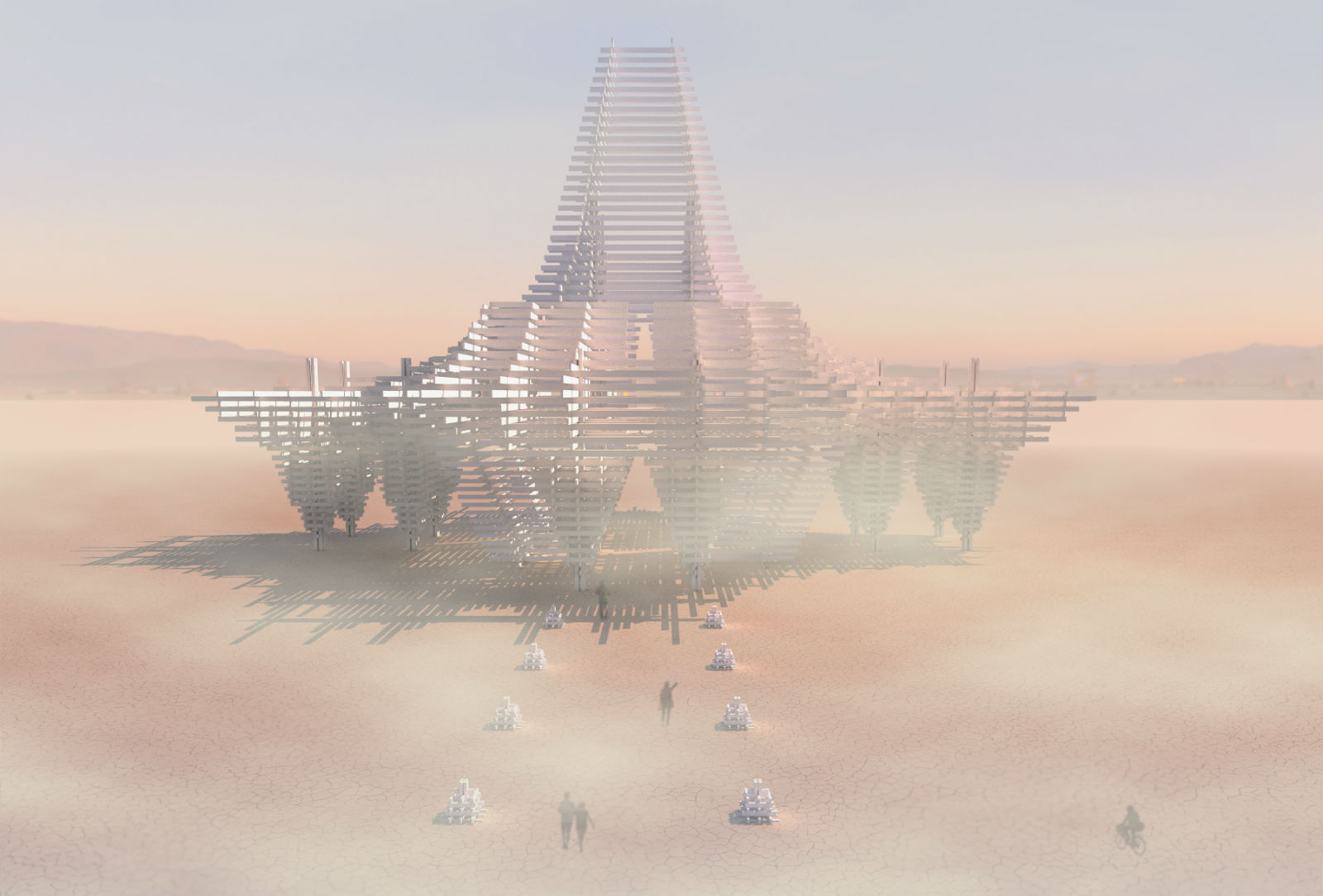 Behold the 2017 Temple, this year being designed and constructed by David Best’s previous years’ lead engineers and architects Steven Brummond, Marisha Farnsworth and Mark Sinclair. Notable for its standout, vanguard design, this Temple will be constructed from pine trees that had to be cut down after being compromised by forest fires and global warming.