A Sneak Preview of the Stunning, Enormous Art Coming to Burning Man 2018

The best 2018 Burning Man art is already coming together at warehouses, art studios, and maker collectives all over the world. We’ve got a sneak peak of the most dazzling, hypnotic, and robotic 2018 Burning Man art projects with pictures, videos, and stories from the artists who are still tirelessly building these I, Robot-themed installations.

We know these art projects will be Burning Man favorites, because Burning Man chose them as favorites when Burning Man Arts selected 76 projects from 15 different countries to receive $1.3 million in their 2018 Black Rock City Honoraria grants. Let’s get to know the Burning Man art installations grant winners with pictures, prototypes, and behind-the-scenes videos of their projects, including a few exclusives that haven’t been released until now.

The 2018 Burning Man Temple takes on a very special significance this year as we mourn the passing of Burning Man founder Larry Harvey. This year’s Temple has room for more memorials than ever before, and the 30,000 square-foot, 65-foot-tall “giant 3D printed mandala” called Temple Galaxia will be one of the grandest Temple works we’ve ever seen. 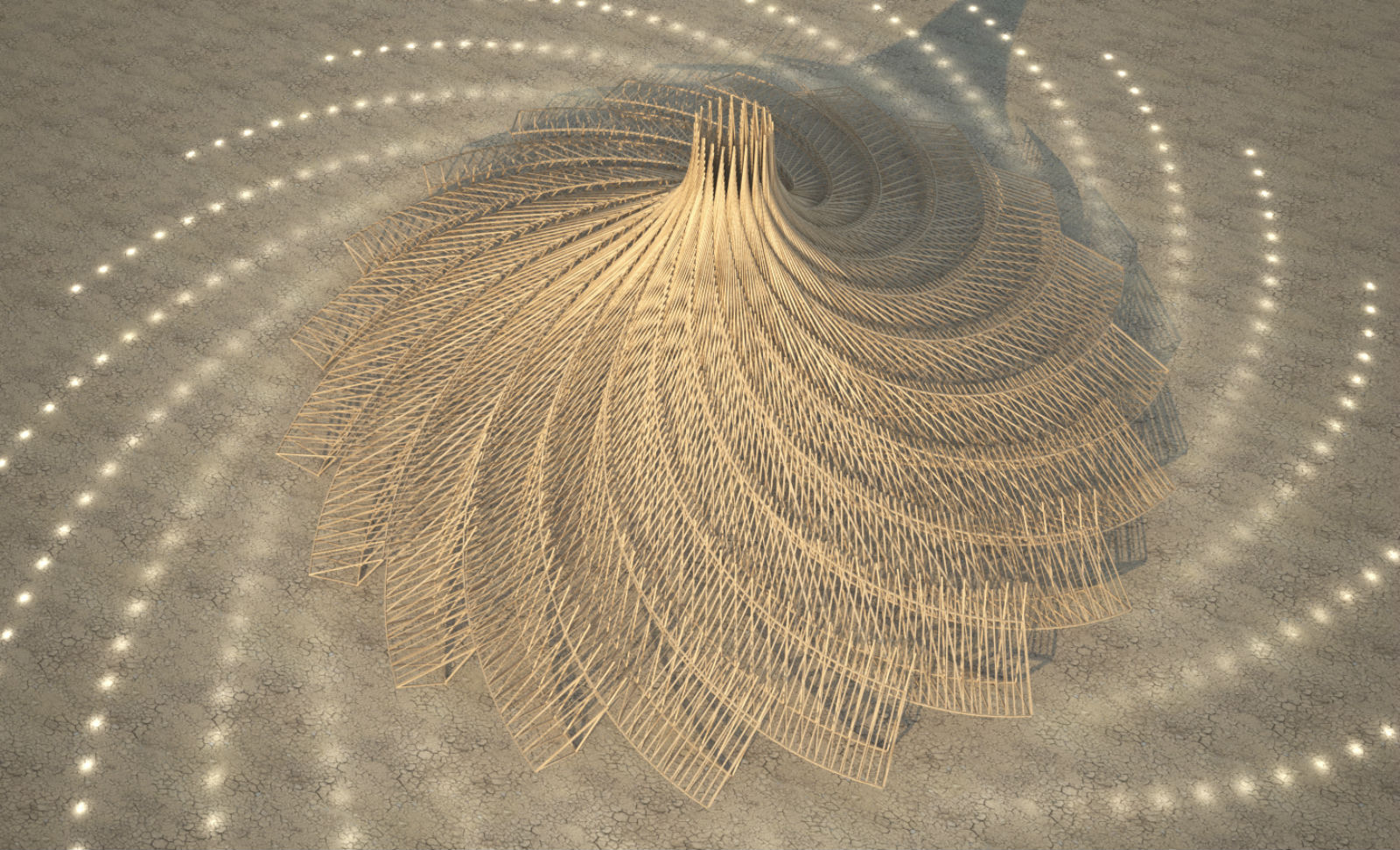 Designed by London-based French architect Arthur Mamou-Mani, this Temple is notable for its enormous size and the 2,400 individual laser-cut wooden triangles that form its breathtaking outer curves.

According to a breaking news update from the Burning Man Journal, the Temple Galaxia team has just finished crafting those thousands of wooden triangles. But the team still needs volunteers in Reno and San Francisco for the second build phase, and Mamou-Mani tells Everfest, “We're still looking for people to come and help.” You can join this historic Temple team on the Galaxia volunteer group Facebook page, or make a donation to support the 2018 Temple.

You’ve seen the work of Oakland’s FoldHaus Art Collective at Burning Man before, when their Shrumen Lumen (2016) and Blumen Lumen (2014) towered over the Playa. Those shrooms are off on display at the Smithsonian’s “Art of Burning Man” exhibit, but Foldhaus is building a five-story geodesic sphere that will serve as your new favorite late-night beacon. 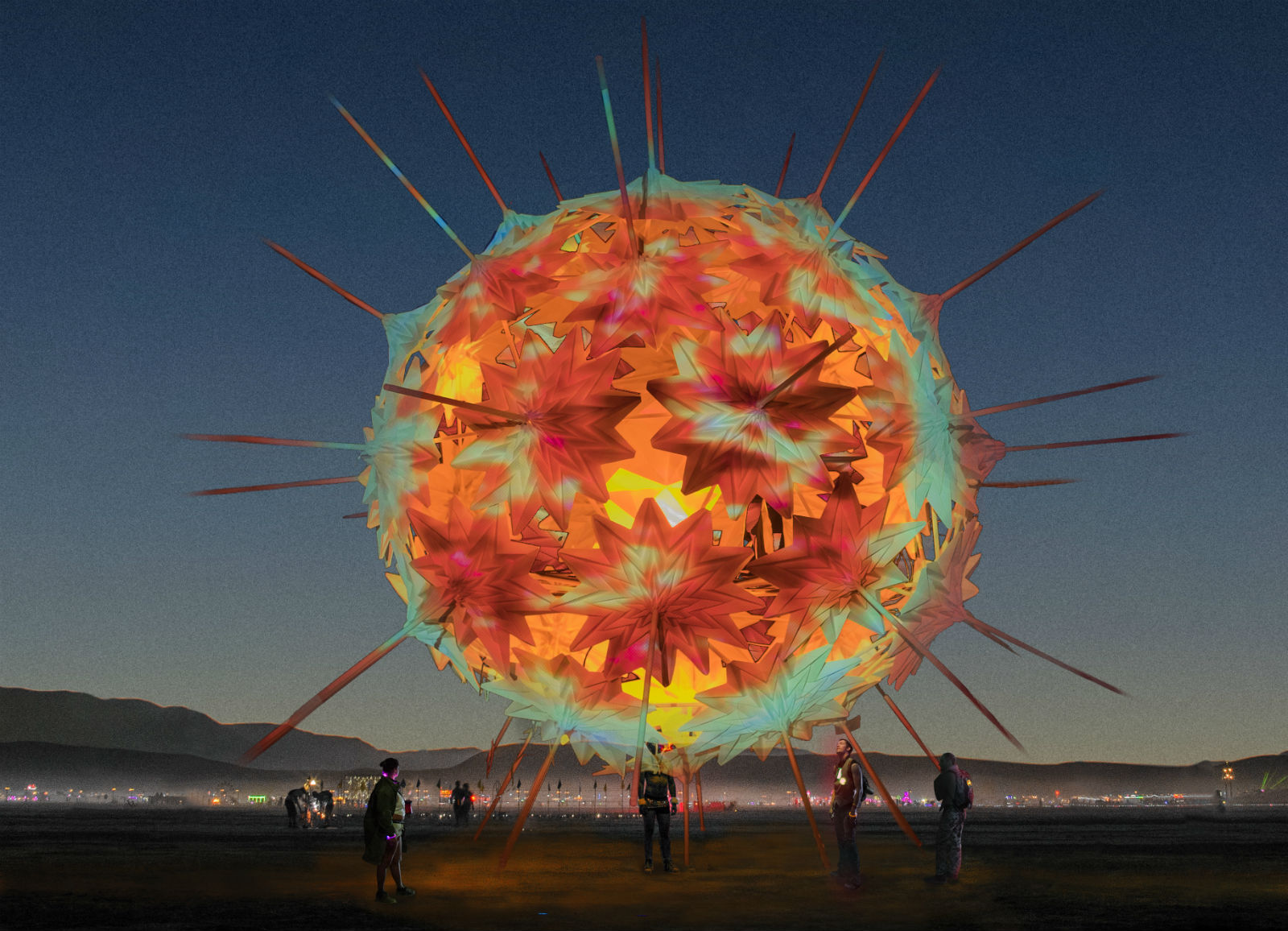 RadiaLumia will be embellished with more than 100,000 LED lights, and its outer shells will bloom and contract like flowers. “Visitors will be able to not only view RadiaLumia from outside, but step completely into it,” FoldHauss says in a statement. “Inside the sphere, visitors will be able to climb a platform and retreat, transcend time, look out onto the surrounding landscape, and experience from within the magical opening and closing of the shells.”

The video rendering above of RadiaLumia at night gives you a taste of its colorful psychedelic projection mapping. 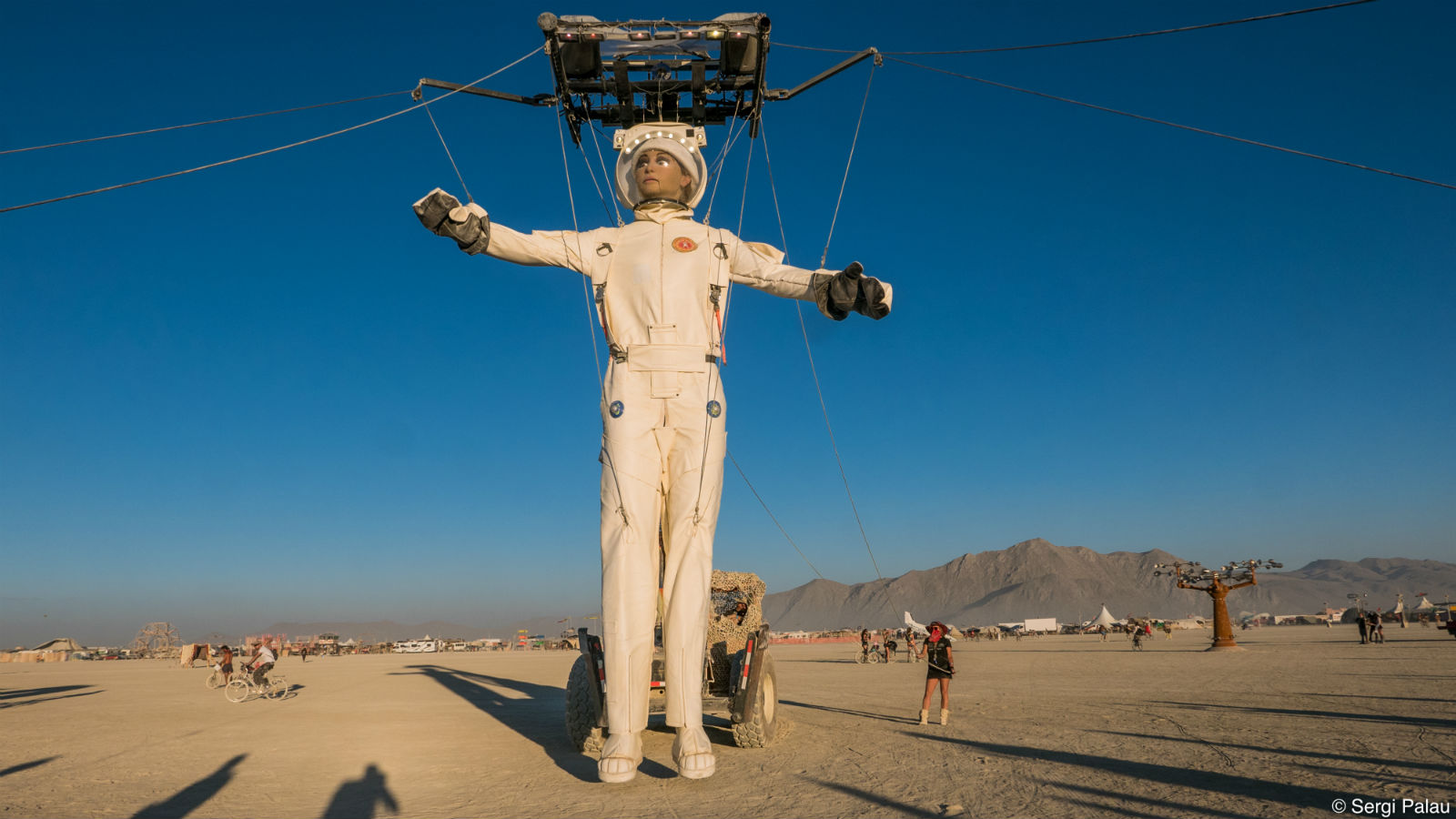 That towering teenage girl puppet Euterpe stole the show at last year’s Burning Man, and she brought as many different cool outfits as any Burner did. This year she’s bringing her also-colossal grandfather Alberto as well, and they both come courtesy of the Spanish street theater groupCarros de Foc.

“The artwork consists of two giant puppets, 20 feet tall and totally articulated, that walk and talk live, interacting with Burners,” Carros de Foc says in a statement. “Their art installation consist of a giant table and two giant chairs that allow participants to interact with the puppets. Euterpe, Alberto and the Burners will converse to share their experiences, and walk around the Playa, visiting other Artworks. The Burners may interact providing them with movement and life.” 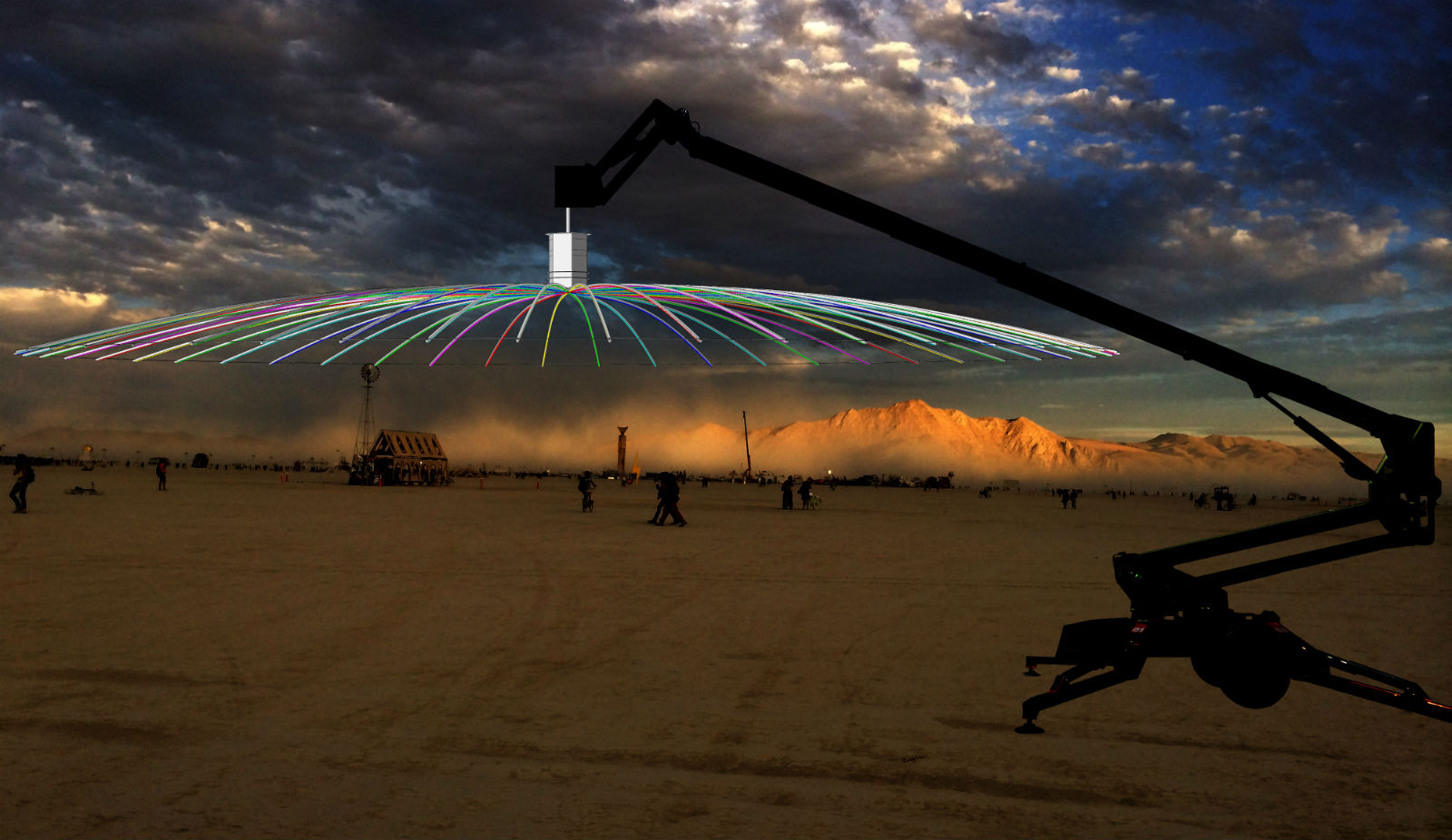 Christopher Schardt’s animated LED canopy Firmament has been captivating Burners who’ve laid under it for the last several years. But his new follow-up Paraluna puts the same colorful, kinetic razzle-dazzle on a parasol-shaped canvas that moves up, down, and side to side.

“Paraluna is a rotating 28-foot disc with 14,400 LEDs hovering overhead,” Schardt tells Everfest. “A computer displays patterns on the LEDs while raising, lowering, and tilting the disc. Classical music completes the setting, accentuating the emotional impact of the images and creating a comfortable, convivial space below.”

“It's like Firmament, but spinning!” he says. You can see what Schardt’s spinning circular LED magic looks like in a photo gallery of his previous project Spokes. 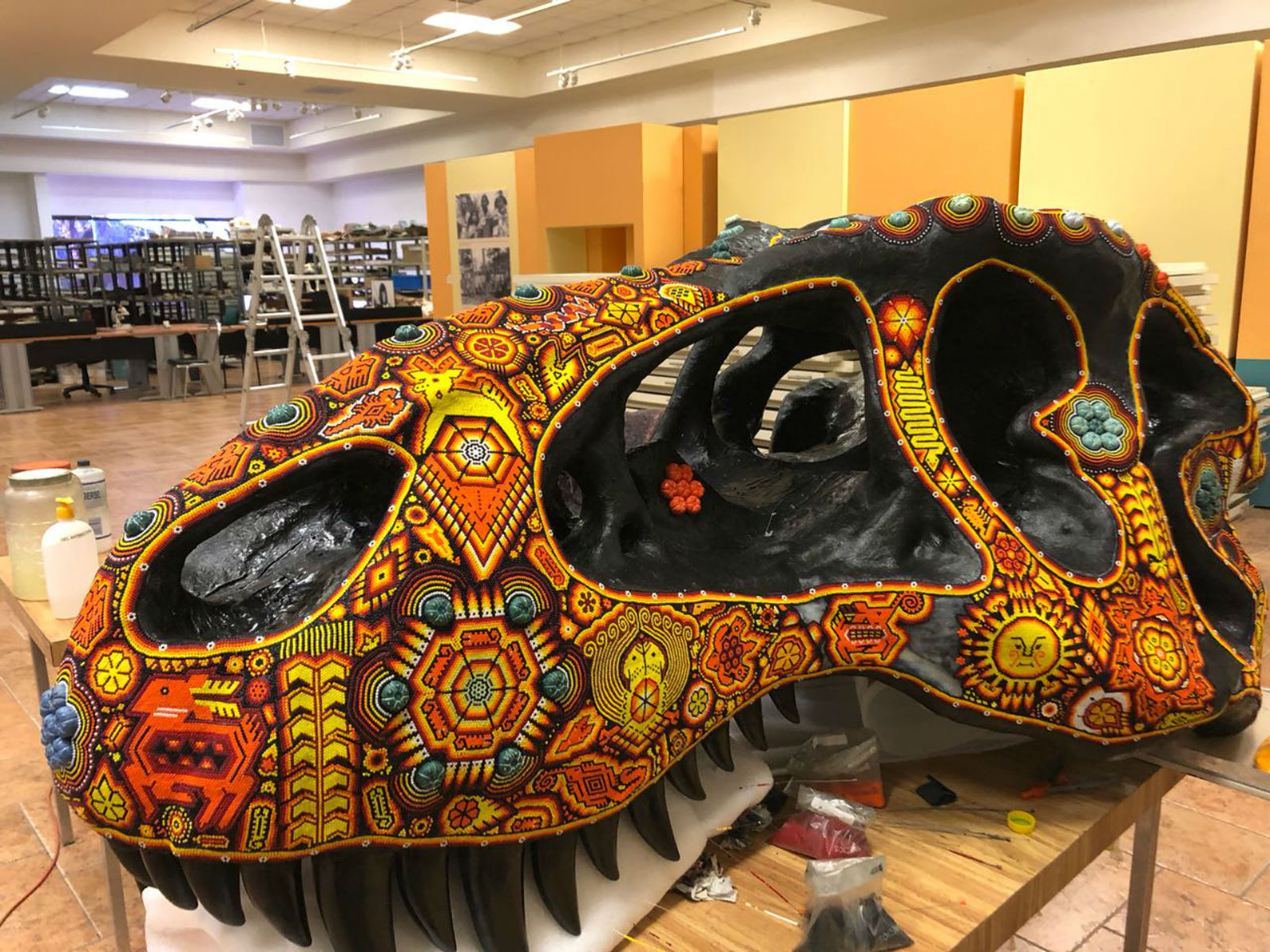 Here we see an exact replica skull of the ancient Mexican dinosaur Velafrons coahuilensis. They’ve been extinct for millions of years. But at Burning Man, you’ll see enormous, full-size recreations of these dinosaurs, rebuilt and meticulously hand-coated with constellations of those colorful, tiny Huichol beads.

“The dinosaur will be decorated in the art of the Huichol, an indigenous tribe of Mexico who now live on the same lands that once were populated by the Velafrons,” Ichiro’s Marianela Fuentes tells us. “The dinosaur will be illuminated from all sides to be visible at night. Ichiro is a very emotional altar of ancient times on which there will be an original ritual every day at sunset, aiming at connecting with our ancestors and our inner self.”

“We live at this remarkable blue sky desert, full of cacti and an impressive mass dinosaur grave,” the visiting artist says of her native Mexico. But the installation reminds us how this very same Playa was also once roamed by dinosaurs, and will be again this year. 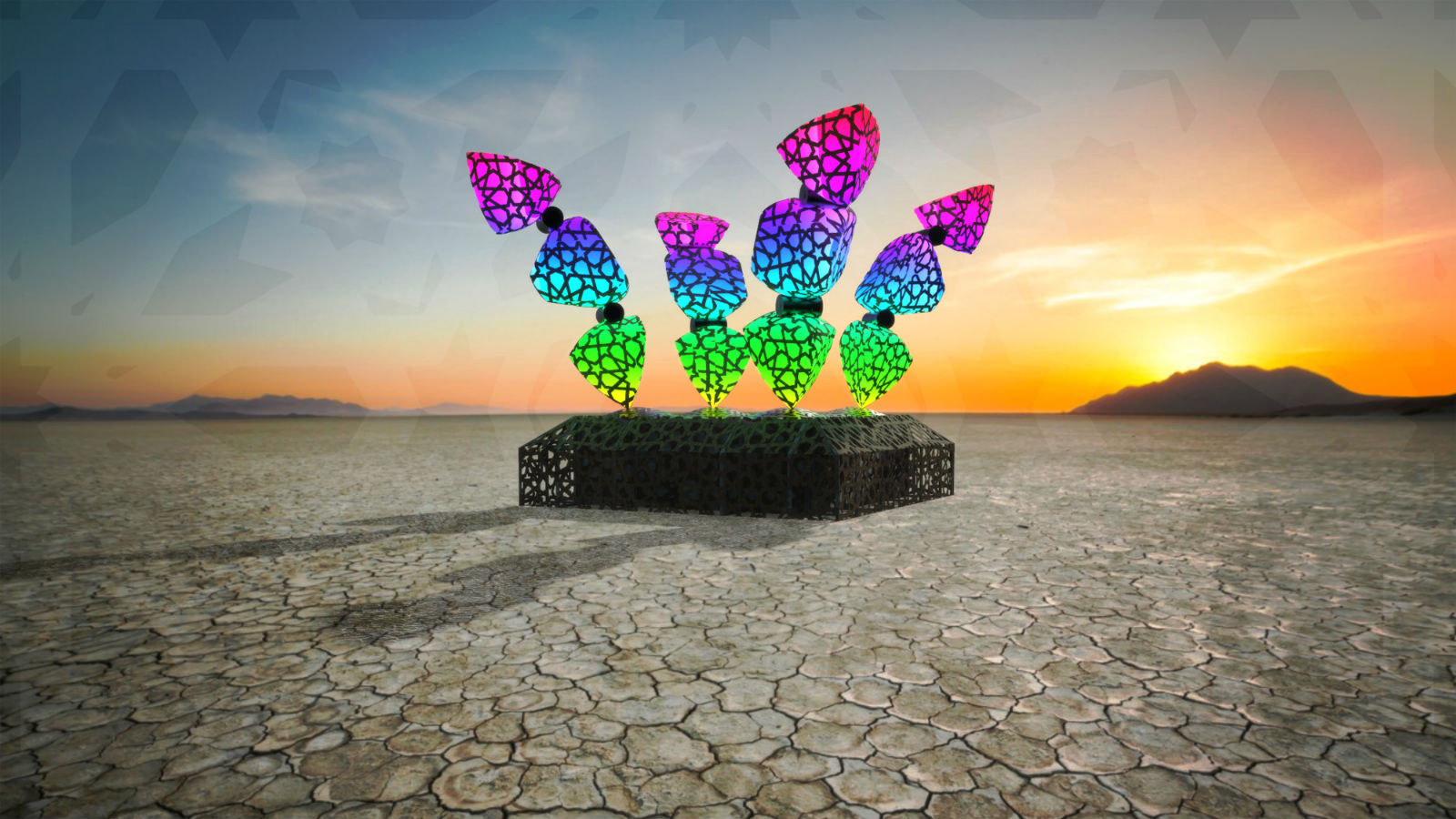 Charles Gadeken’s constantly color-changing sculptures have lit up Burning Man many times before, in the forms of Squared (2014), Roshanai (2016), and his collaborations with the Flaming Lotus Girls. But this year’s installation CROWN has some new moves — moves that you can control with a joystick.

CROWN will be an interactive, robotic sculpture with four kinetic towers that are each 30 feet tall. Gadeken’s signature style of laser-cut panels and thousands of mutating LED light possibilities is enhanced this year with hydraulic actuators that allow participants to move the towers around by creating a program or moving the joystick.

"My mission with CROWN is mass hypnosis, wonder, and delight," Gadeken tells Everfest. You can help him create it by donating to the CROWN Kickstarter. 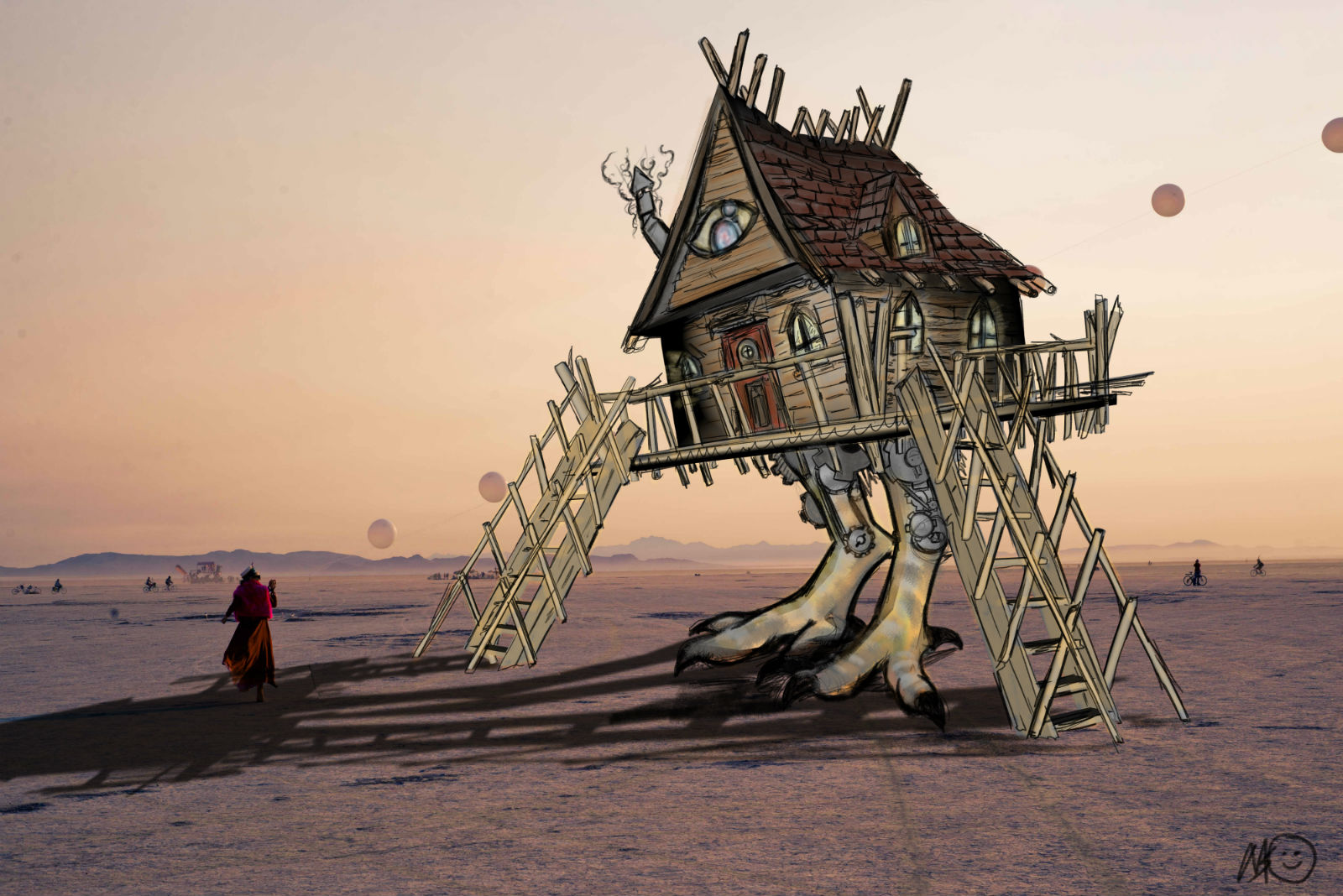 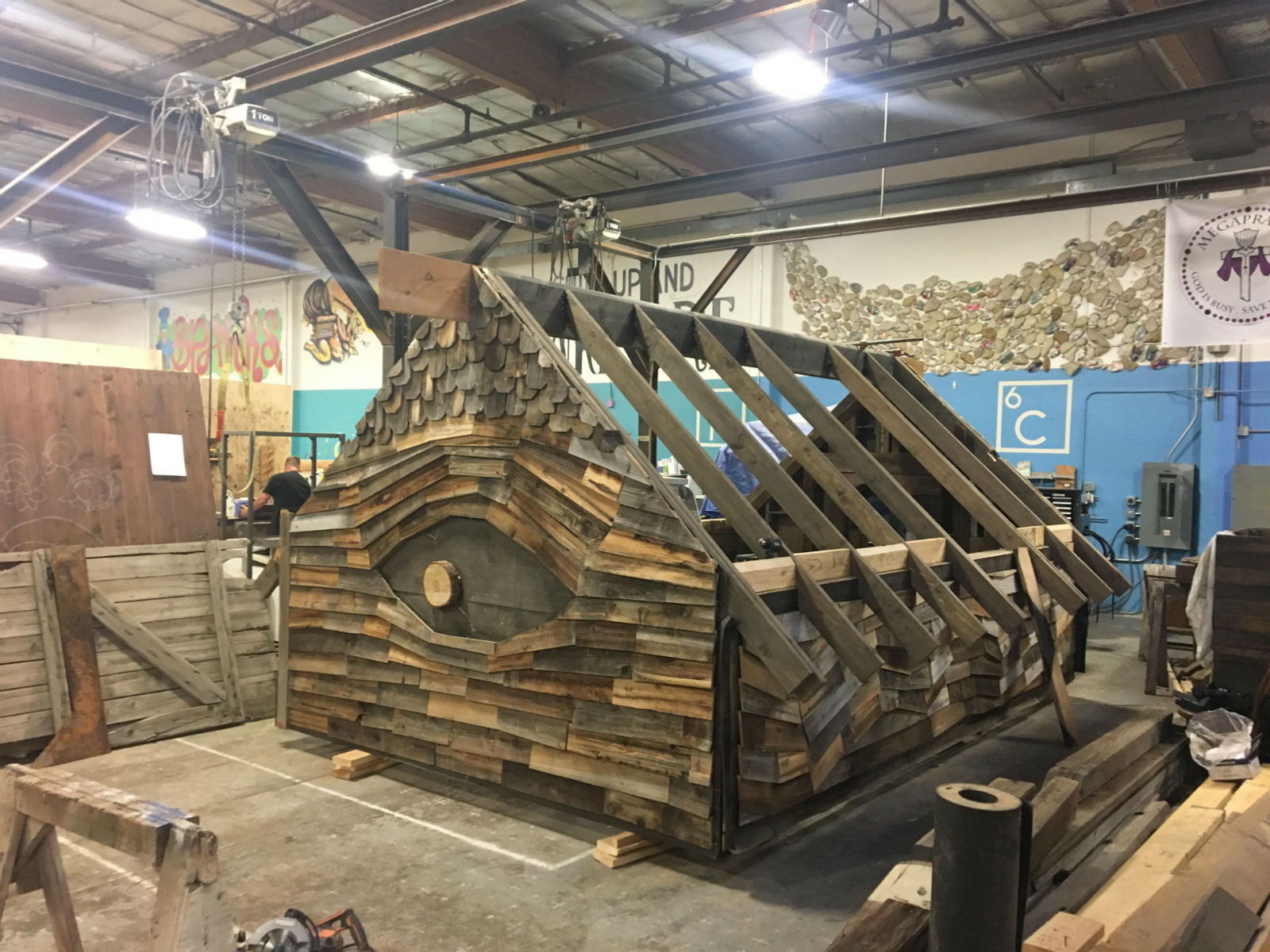 As you can see, the treehouse is progressing nicely. “This project is an offering to the great Slavic witch Baba Yaga,” says artist Jessi Sprocket Janusee. “She straddles the worlds of nature and humanity living like so many witches, on the edge of the woods acting as a liaison into the supernatural realm. She is one of the oldest matriarchs and is neither good or evil, but something in-between. Most of the crew members on this project are mothers, grandmothers, dads to daughters or have a strong connection to a matriarchal figure in their life.”

If this is a book club you want to join, the Baba Yaga Book Club Patreon page is still taking donations. 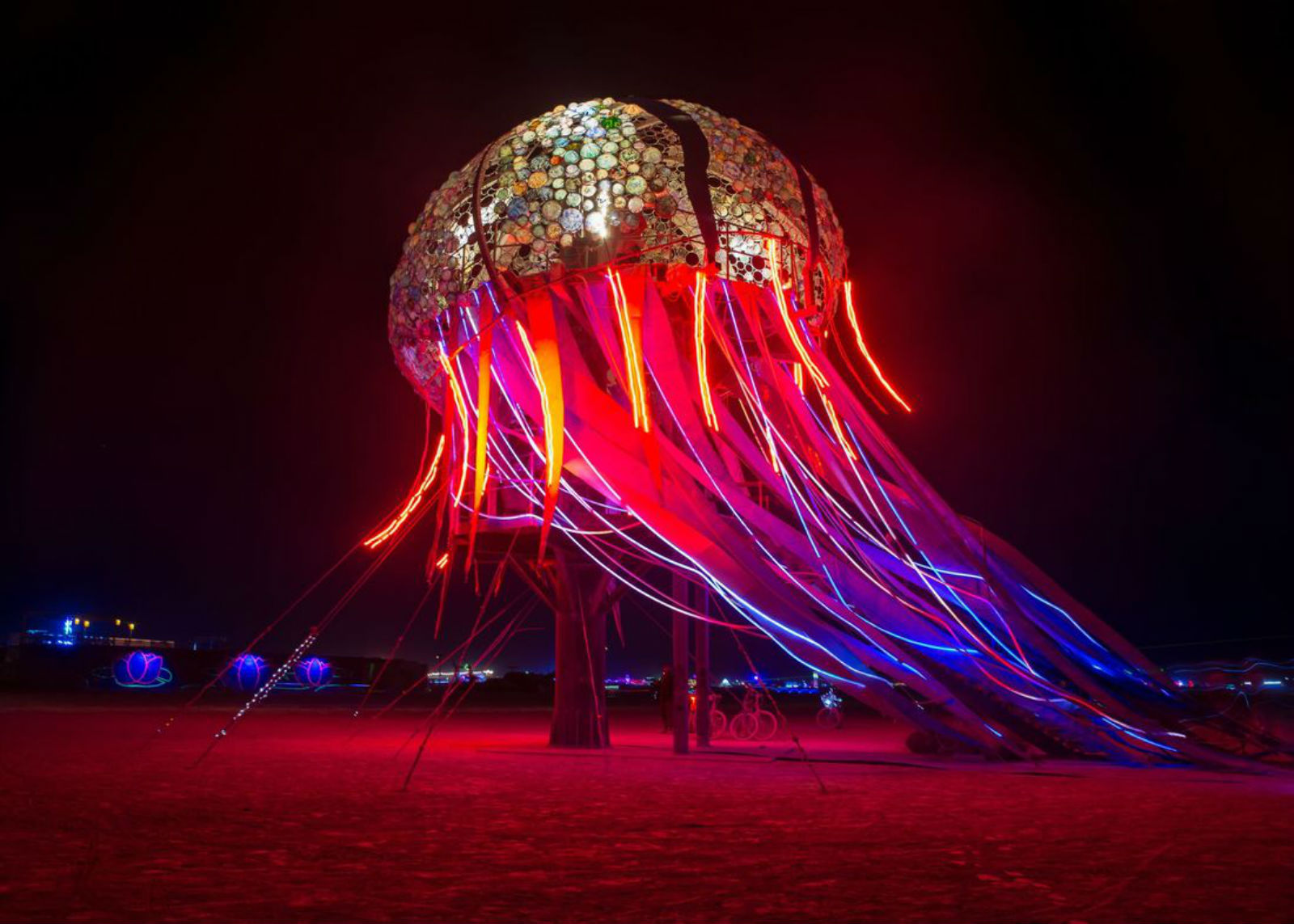 Perhaps you saw the 40-foot-tall jellyfish Bloom at Burning Man 2017, and maybe you even climbed up its two separate floors. But mosaic sculptor Peter Hazel has added some new upgrades for this year, and you may have unwittingly helped him if you’ve recently gone out drinking in Reno.

“This year we are collecting Jameson, Skyy, and Jager alcohol bottles from local bars around Reno, Nevada,” Hazel tells Everfest. “I have been able to cut this glass and fuse it together to make more Bloom bowls and keep the recycled glass theme for this year. These bottles should add a lot of solid color to the piece to make it stand out.”

“We are also changing the tentacles and making them solid steel instead of fabric,” he adds. “This year we will also have an incredible LED light show.” 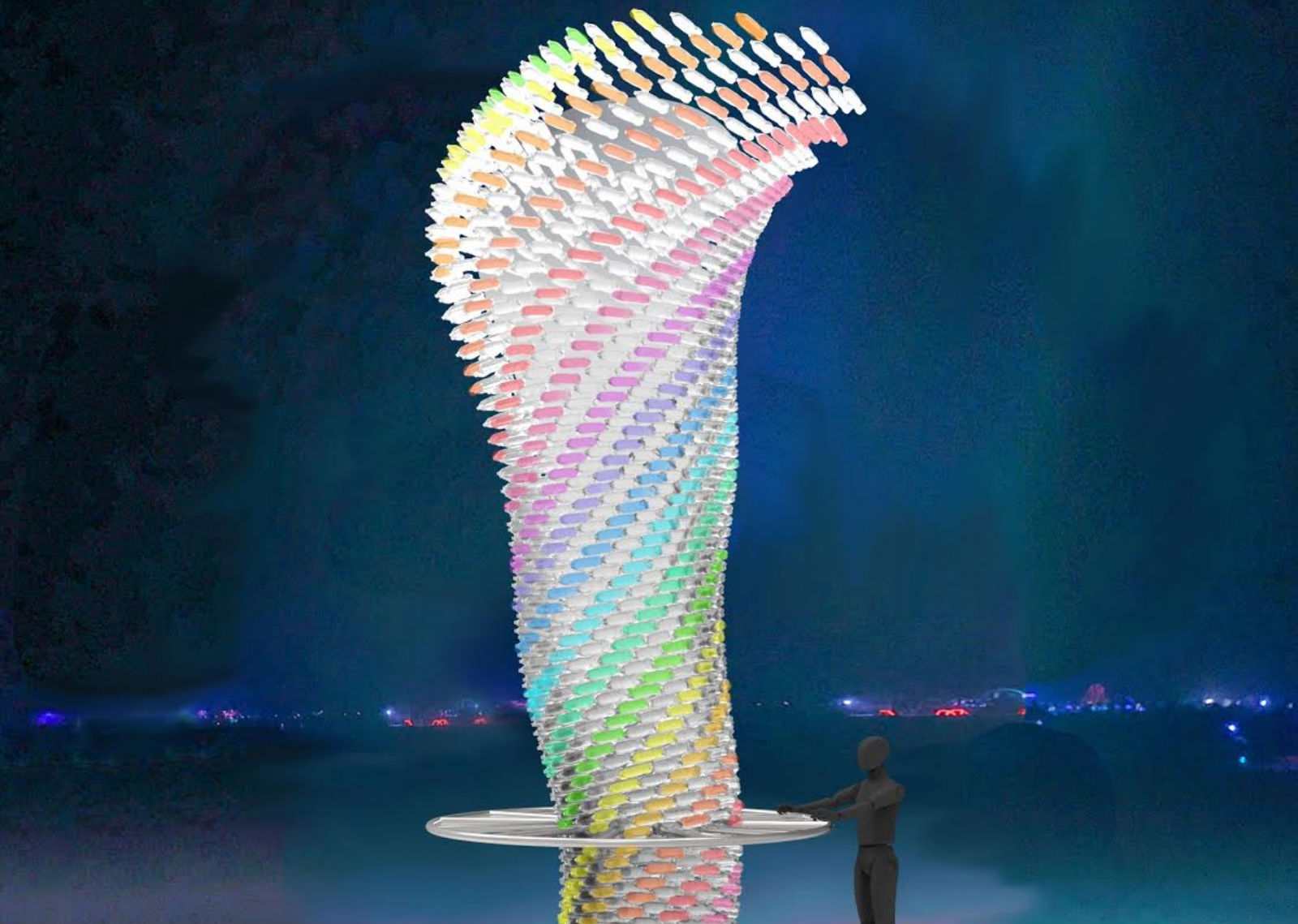 The Reduce, Reuse, Recycle ethic takes a radical new meaning in RE-CYCLONE, a 20-foot-tall “rotating tornado” built from discarded plastic water bottles that illuminates at night and can be rotated with a hand-wheel near the bottom.

“The 5,000 plastic water bottles were hand-collected by volunteers, school children, and myself from trash cans, drainage ditches, and festival grounds across California,” Chromaforms Art Collective engineer Martin Taylor tells us. “We are currently working hard to assemble the sculpture. If you live in the San Francisco Bay Area and are interested in being involved, please join our Facebook group for work day events.”

The Jokeatron 5200 is your chance to get inside a 24-foot wide steel banana peel and have your best (or worst) jokes broadcast across the Playa on a public address system.

“Besides being a platform for people to share their culture through jokes, the Jokeatron 5200 is also about our ambiguous connection to robots,” says Jokeatron co-inventor Natali Leduc, this year’s only Canadian Honoraria grant recipient. “Humour is still one of those frontiers that makes us human. But for how long?”

“While robots are trying to emulate humans, are we, in turn, becoming robotic?” she asks. They’ll try to solve that question out at the big steel banana peel where everyone’s telling dirty jokes.

In Case We Miss Each Other 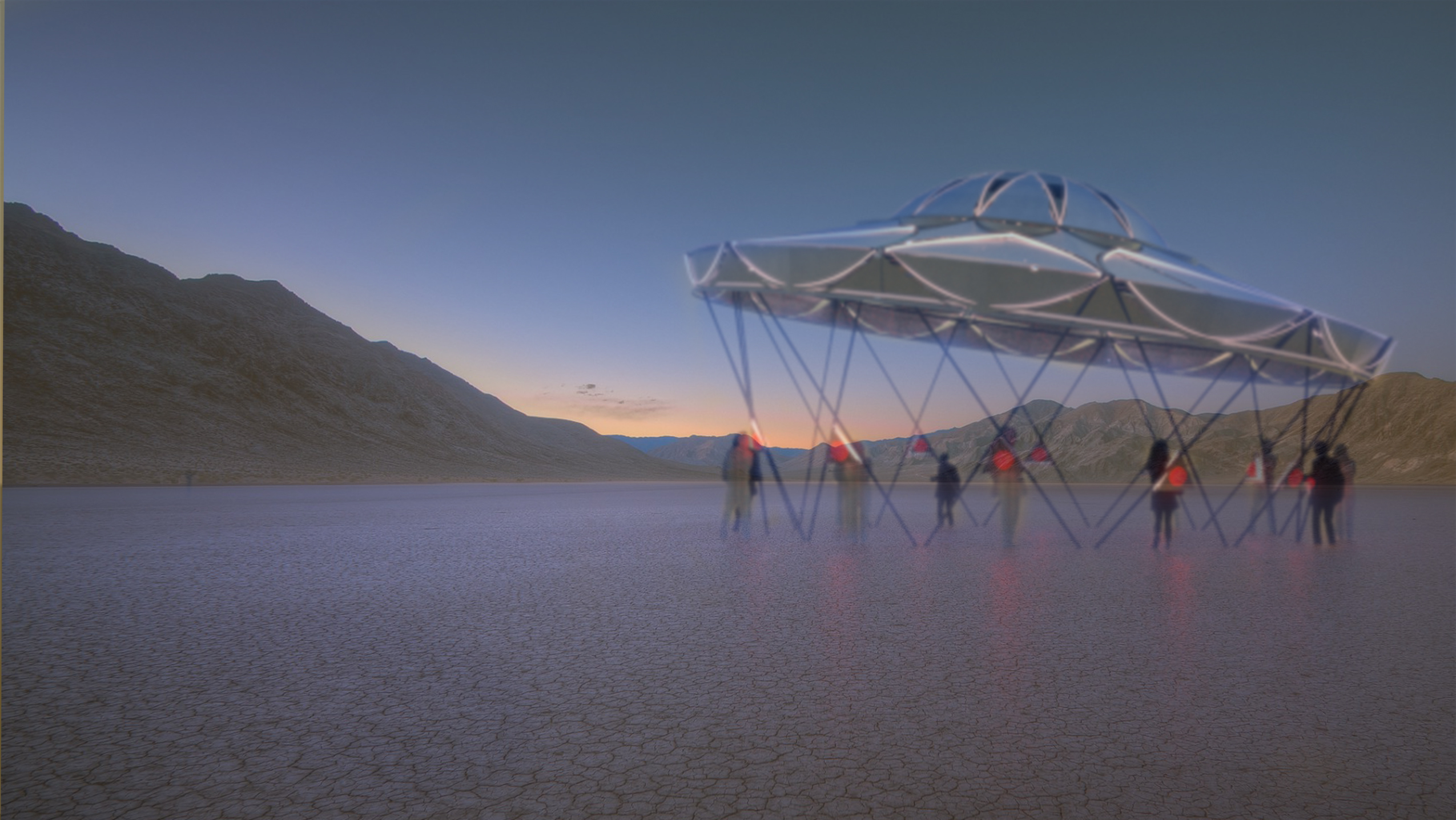 Pasadena collective Soul Oceans has ambitions that are out of this world with their 2018 project In Case We Miss Each Other.

“It is an installation that allows participants to leave short messages that will be encoded into binary [digital transmission] and sent to a star system about 93 light years away that SETI has been receiving phenomenal signals from,” lead artist Ilya Barannikov tells us. “There is speculation on whether these are terrestrial or not, but there are a lot of people who think they are extraterrestrial.”

So you might end up making contact with alien civilizations at Burning Man this year, or when Soul Oceans takes their flying saucer structure to Costa Rica, Australia, and other international festivals after the Burn. 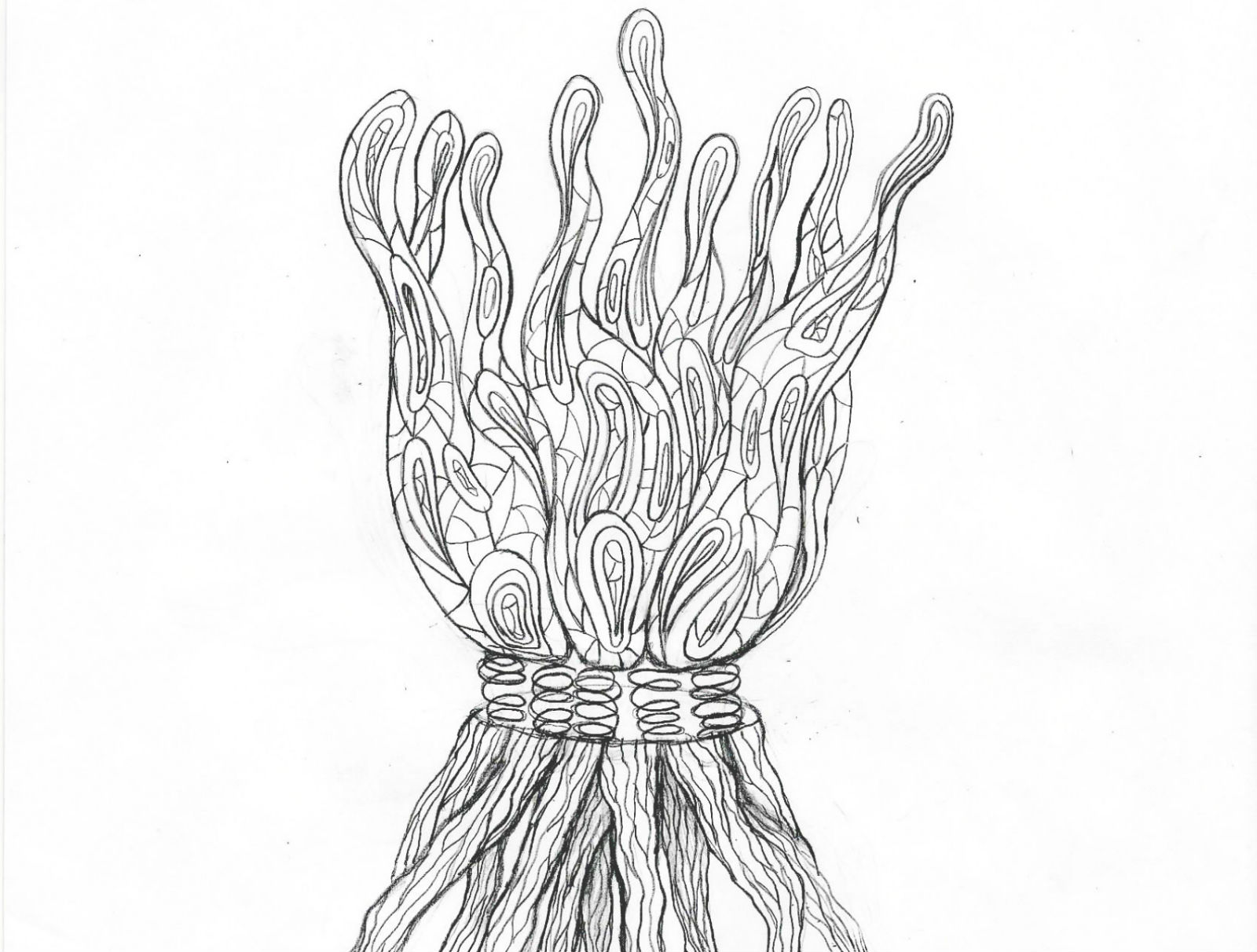 Following up on her Reaching Through creation last year, South Lake Tahoe sculptor Jessica Levine returns with a jungle gym-type of sculpture that lets you get inside and bounce on suspension springs. FloBot is a robot-inspired, LED-lit collection of moving pieces that serves as a meditation on finding safety in your roots.

“People will be able to climb up the roots and the legs and get inside of the top piece, the flowery looking part. That’s her head, her brain,” Levine says. “People get inside of her head, move around shake it up. It’s this whole metaphor of people getting inside your head, and stirring things up, but you’re still strong. It doesn’t affect you.”