In the world of bass-stomping music festivals, it’s seldom that most folks have the chance to enjoy the soft strumming of a ukulele by a juggling championship looper with a vaudevillian flair...believe it or not. Yet one incredible artist has found a captive audience for such an act at music festivals all over. With The Jive Joint, a traveling stage "that unfolds like the Imaginarium of Doctor Parnassus," the multi-talented Super Tall Paul is making this aspiration a reality by successfully touring some of the best music festivals in North America, including: Coachella, Lightning in a Bottle, Art Outside, Shambhala, Bonnaroo, Electric Daisy Carnival and Electric Forest, just to name a few. Since its inception, the Jive Joint has come to be a widely celebrated oasis in the increasingly electronic festival world, one that lends a refreshing calm with funky, jazzy rhythms, beat-boxing, and a soulful voice that resounds like a lullaby through the night sky.

To learn more about the Jive Joint and Super Tall Paul's act, I caught up with him at MindShare—a monthly networking event in Los Angeles dubbed "enlightened debauchery" for its tasteful combination of Ted Talk-style presentations with music and comedy served up as "mental sorbet." 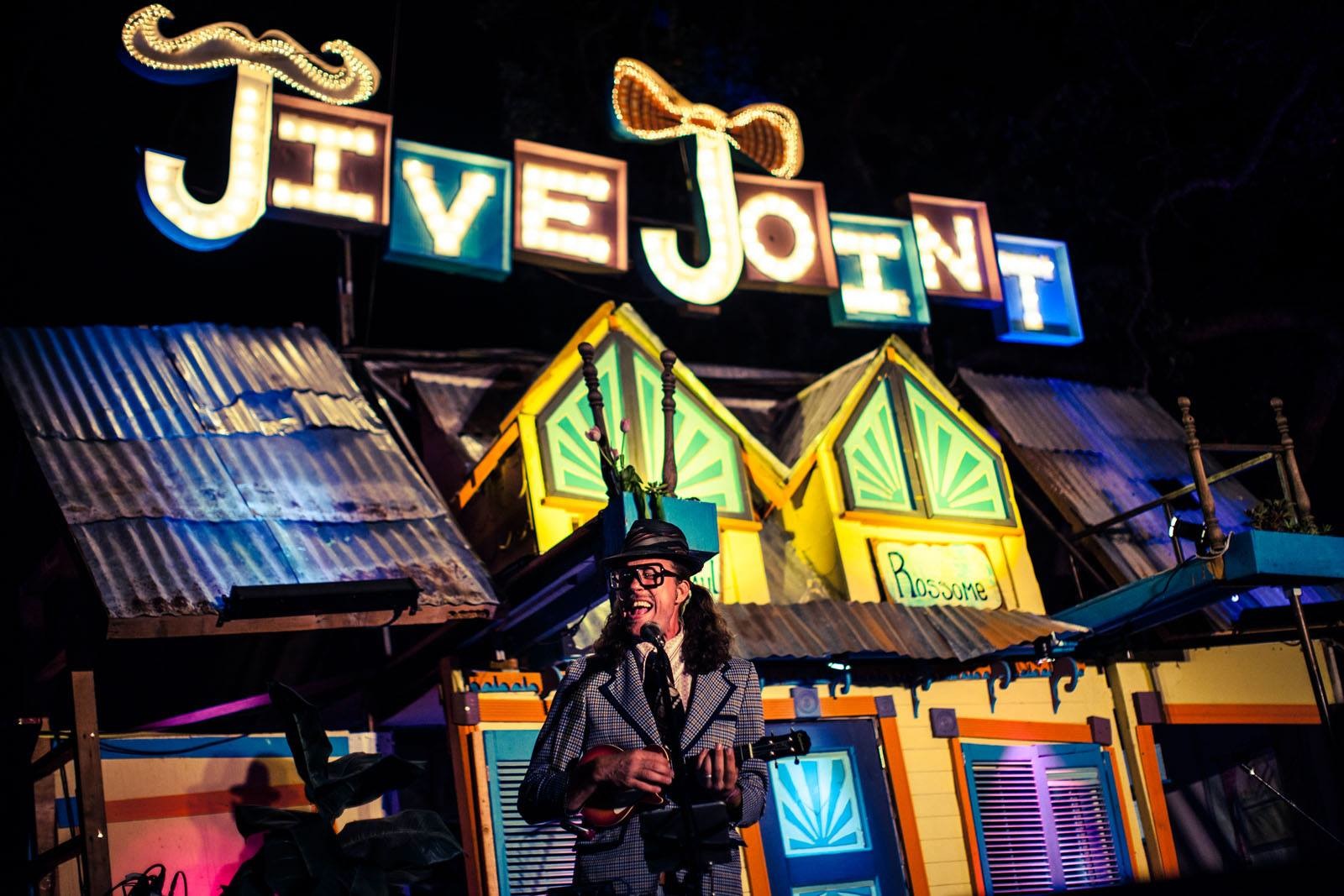 How the Jive Joint Began

I asked how the Jive Joint came to be and Super Tall Paul (Paul) explained that it all began with Suddenly Dapper, a street-based improv troupe, and his partner in comedy Ross Steeves, who has affectionately come to be known as "Rossome." The first of many Jive Joint adventures occurred many years ago at Lightning in a Bottle, a blooming California festival hosted by the down-to-earth folks at The Do Lab. Epic painter, Carlos Vera, who creates art at many national festivals including LIB, asked Paul if he would perform next to his art installation and thus the foundation was set for the Jive Joint to be born into the festival world. After performing all four nights of the three-day festival from midnight until sunrise the mission became clear. Paul recollected on how well received the inaugural show was and said “[I knew] the first time we did the Jive Joint that there was a serious need and desire for something different.”

Armed with an understanding of what was needed, Super Tall Paul set out to discover what was possible. This meant the Jive Joint needed to be more than a typical dance party. It was planned as "a safe place for people to go and take haven… from the heavier stages." With a homey, theatrical charm, the Jive Joint serves up whimsical melodies and chortles night after night bringing people together. Performances are presented at the Jive Joint as a gift for all to enjoy "as a service to the community of people who find merit in the act of connecting with others in such a transformative way." For Paul, the belief in sharing that remarkably transformative power of music and laughter is both a purpose and a prize. He believes in this so much, in fact, that he brings his family along to take part in shows on the road. In addition to working alongside loved ones Paul explained, "we [also] do what we love for the people that love what we do." 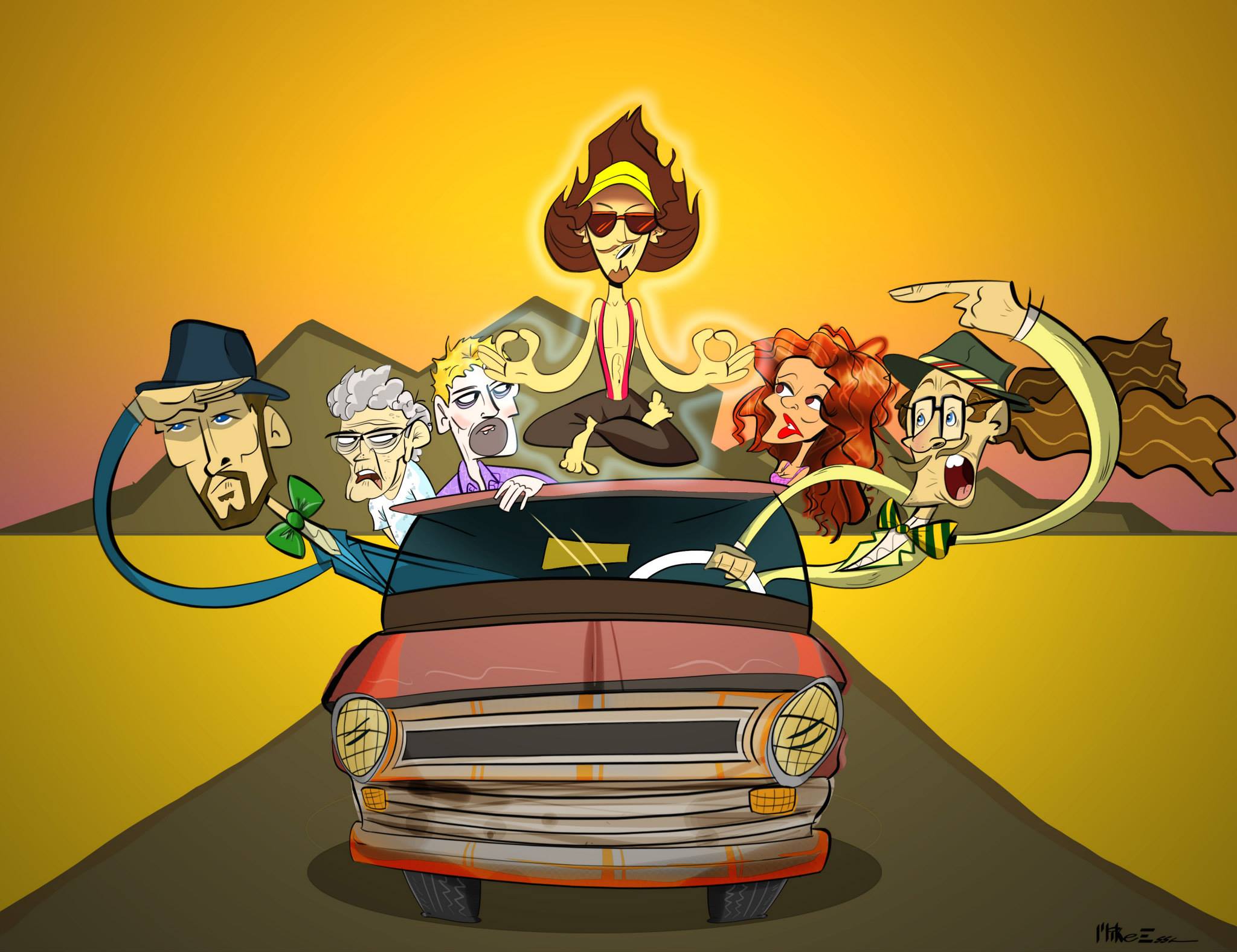 In addition to Rossome and Super Tall Paul, there are several other talented performers that make the Jive Joint shows possible. When I asked about the other contributing performers, Paul smiled proudly and said "My wife, Rachel, is an improviser, sings, dances, writes, and helps to direct Jive Joint material [while] Ross’s fiancé, Ashley, helps with stage management, social media and is a talented painter." Also, a longtime friend and solid bass player by the name of Robin Banks has been instrumental in constructing the newest incarnation of the Jive Joint set on wheels. With loving and supportive partners as well as fans, Paul and Ross are able to dedicate themselves fully to a labor of love that sweetens the entire festival experience.

Event organizers are constantly trying to shake things up, and Super Tall Paul and Rossome stumbled onto something unique and beautiful that hit festival patrons like a breath of fresh air. For Paul, it was much more than a different sound. It was a chance to share the joy of interactive hilarity. He explained, "that difference simply translated to a place that inspired group laughter." The challenge was delivering that experience after other festival stages were required to shut down. Paul said "I discovered very early that the best way to not compete with the sound of the big stages and the audience’s attention was to have a theatrically driven show… that happened after the big stages had gone to sleep." By serving up this fresh brand of musical theater, Super Tall Paul and Rossome set the stage for audience members to share in one last great memory after a tireless day of friends, fun and music. When a festival includes the Jive Joint on their roster, the feel-good nostalgia offered allows weary audiophiles the choice of ending the night with explosive roars from the big stages or with an enchanting serenade under the moonlit stars.

The Love of Love at Music Festivals

I asked Super Tall Paul what it is about the crowds at EDM festivals that make for such a great audience during his uniquely interactive shows. He was quick to point out qualities that are exclusive to music festivals. Specifically, he talked about "the multi-layered removal from ones own defined normal reality" as key to understanding the Jive Joint appeal. “A festival is a great place to have interactive art in general” he added. "The moment a festival patron arrives they have begun to shed that layer of the burden of everyday life. There is a shared excitement for what is about to happen. Then after a day or two of existing in this new headspace of fun, sensory explosion, dehydrated, lack of sleep, dance tired bodies they find themselves moving away from the big stages and seeking the small." At this point, festivalgoers are "primed and ready to have their next layer of reality removed in an intimate, self-reflecting, participatory way." It’s here that the Jive Joint shines. That beautiful moment of free-spirited connectedness is then captured and amplified through the fun of improvisation. Because those moments are made interactive at the Jive Joint they aren’t simply memories. They’re experiences that "bring attention to the very present moment" which we all share in together.

These moments reverberate through time too. When Super Tall Paul returns home to hang his ukulele on the wall he is often greeted by online messages and small stacks of mail that collectively tell a story of those who stumble upon memorable Jive Joint performances. Passersby tend to stop "expecting to stay for just a bit and end up staying till sunrise." Many also share that “they had the most memorable time”. Which Super Tall Paul says, "Has really given us purpose and insight into what it is that inspires true memories." 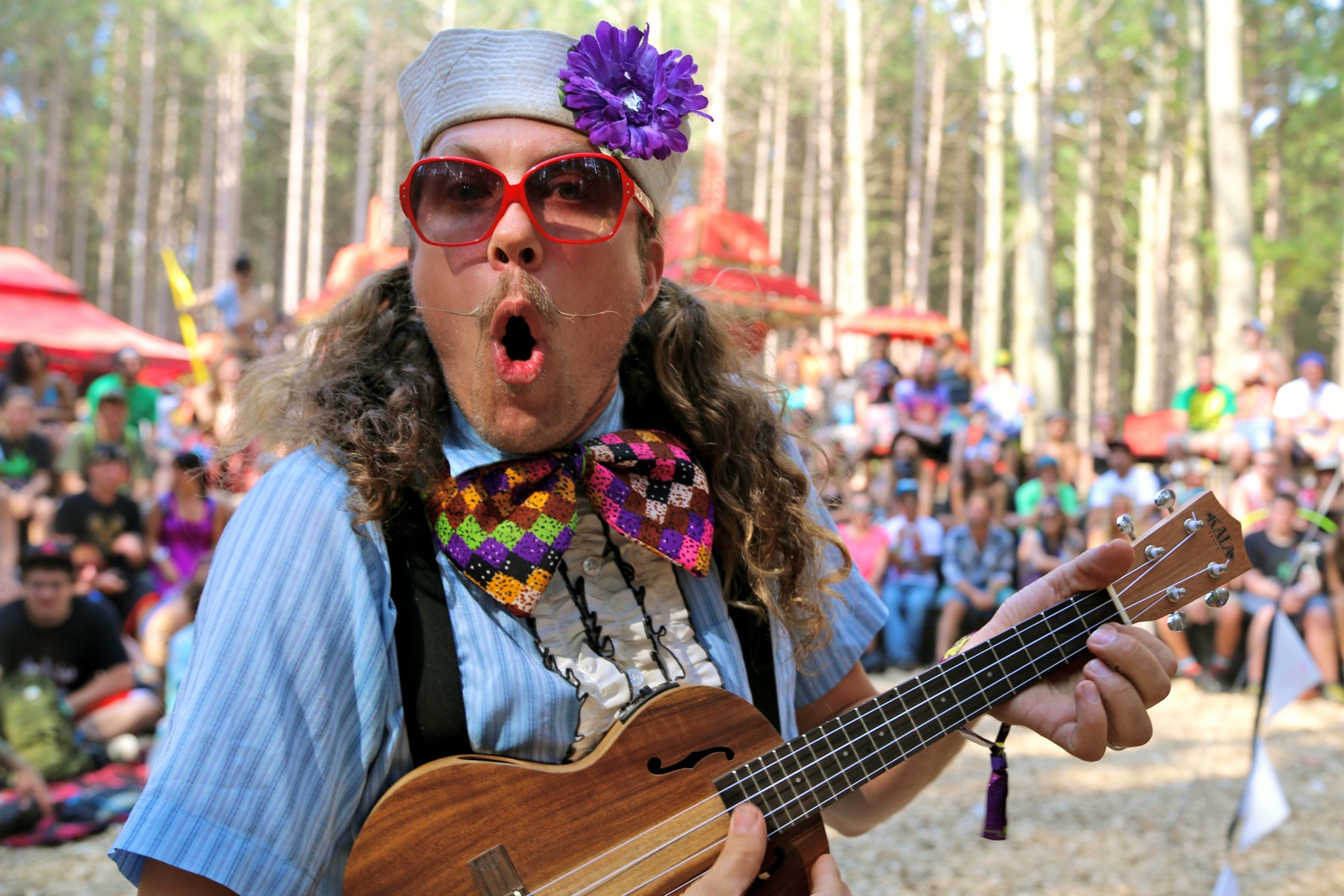 The Unexpected Rise to Power of Super Tall Paul

When W.C. Thornbush started “an artistic mockery of the political system by running for Mayor of the Lightning in a Bottle Festival” he, perhaps unwittingly, started a tradition of satirical improvisation that “has since turned into a very fun performance art piece”. Today Lightning in a Bottle continues this tradition and other festivals are taking note. Last year, at Electric Forest, Paul told me “a man by the name of Rick Forest won simply with clever word play. The campaign slogan was "Elect Rick Forest." Perhaps in admiration for Super Tall Paul’s work, this year, some unknown fan wrote his name on the ballot and in an outpouring of unexpected love, Super Tall Paul took the mayoral election by a landslide. But at this point, Paul said "I had no idea I was even in the running," so he wasn’t even in attendance when they announced the victory. At the time, Paul was actually performing so without a moment’s hesitation a cavalcade of fans and performers marched across festival grounds to retrieve him. Shortly thereafter they reemerged from the forest parading Super Tall Paul through the crowd on the shoulders of fans and friends.

Upon returning home he put together this inaugural acceptance speech.

Clearly from the video, Super Tall Paul is excited to take the helm as the Mayor of Electric Forest, but that won't stop him from doing the iconic, love-infused work he’s known for. I asked what’s next for the Jive Joint and the Mayor had this to say: "We will always be a part of festivals as you just can’t replicate the feeling of being with an audience… But it is time to dedicate ourselves to making video content." Imagining Pee-Wee’s Playhouse with a showman’s bravura, I grinned and thought about how fun it would be to catch the occasional episode. It isn’t every festival experience or television program that can be enjoyed equally by the whole family, but this is one such experience that promises to be an authentic delight for all ages.

Paul shared that in addition to juggling, riding a unicycle, looping, playing a variety of instruments and a slew of other talents, he is also an accomplished film score composer and highly skilled video editor. With his improv partner Ross Steeves and loving wife Rachel, Super Tall Paul has already produced "tons of sketch ideas and scripts that further make real the world of the Jive Joint."

Personally, I can’t wait to tune in.

You can also visit Super Tall Paul's profile on Fest300.

Graham Berry is a marketing freelancer, writer and fanatical audiophile focused on sharing his love of live events and the magic of music festivals. He is currently working with Tixr—an event-ticketing platform specializing in artist tours, festivals and concerts.