Vendors
Photo By: Courtesy of Chapel of Sacred Mirrors

One of the most miraculous phenomena experienced at festivals today is the bursting love that seems to weave into the fabric of all who cross each others' paths. If you’re reading this article, you probably know the feeling of hugging a complete stranger, dancing like nobody is watching with friends to your favorite band, or sitting on the grass under the stars next to the one you’ve had eyes on all weekend. There’s a magic there that, once felt, cannot be forgotten. For me that sensation is always amplified simply by walking through the creative wonderland that artists create at festivals.

There isn’t a better example of one who creates breathtaking awesomeness in the festival scene than Alex Grey , whose works have been featured as album art for TOOL, String Cheese Incident, the Beastie Boys and Nirvana. As a mainstay symbol of the underground, his art also adorns the walls of clubs and galleries across the country. It’s even been used for rave flyers and sheets of blotter acid (according to AlexGrey.com). At festivals, Alex is never far from his beloved; a highly skilled and accomplished artist herself, Allyson Grey plays a key role. She emanates the qualities of a partner, muse and teacher. After witnessing the exchange of sparks that flash when their eyes meet, I can truthfully say that to understand Alex is to understand Allyson, the source behind his glowing smile and playful bounce. 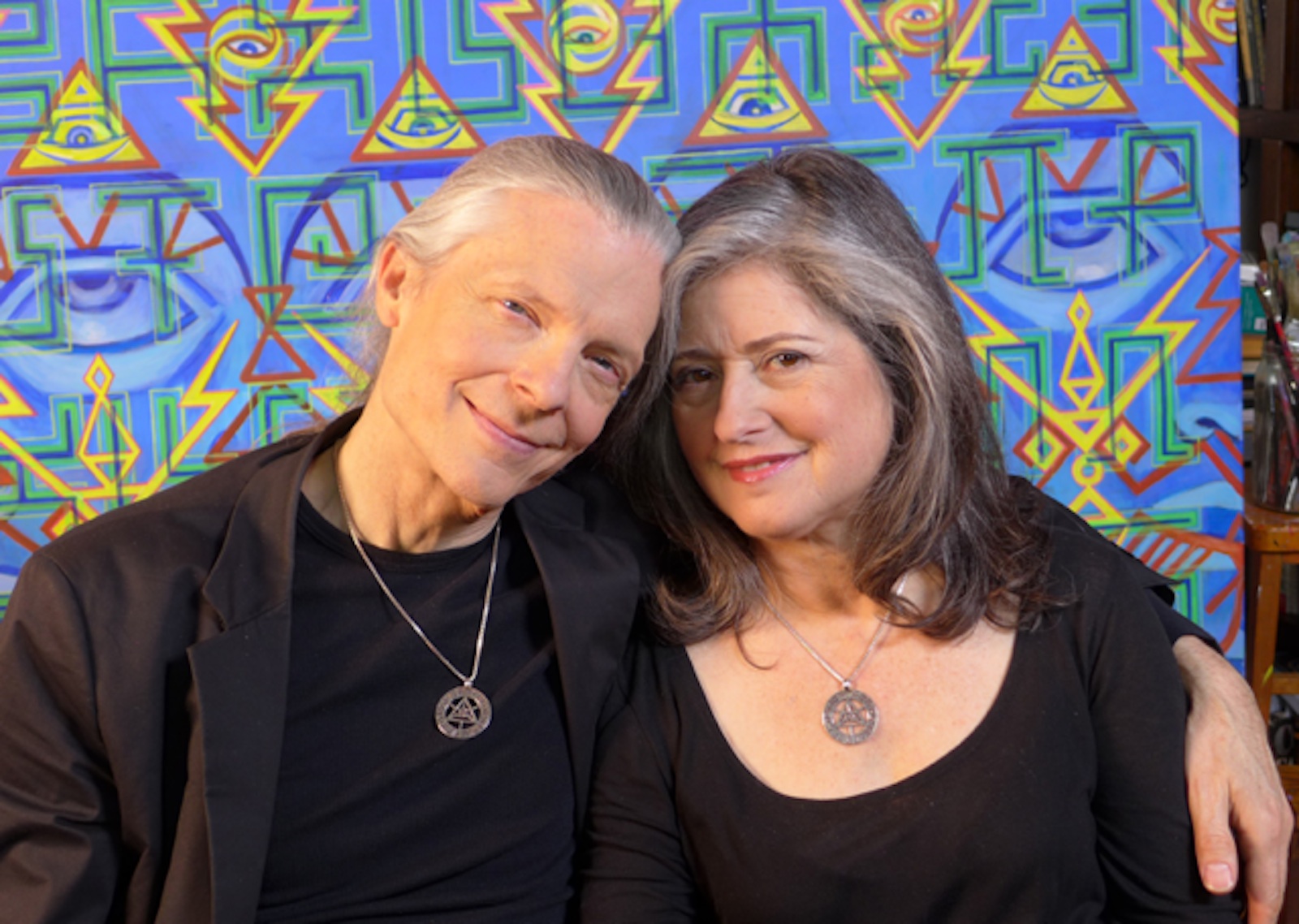 Courtesy of the Chapel of Sacred Mirrors

For the pair, the two have a long history of sharing their art together at festivals. In fact, when I asked them at which festivals they'd painted together they thought for a moment and said “We’ve live-painted side-by-side at all the festivals we've ever experienced.” Suffice it to say the list is too long to itemize here but they’ve performed together at Burning Man, Lightning in a Bottle, Gem and Jam Festival, Rootwire, Mystic Island and Manifestation Celebration – just to name a few.

I recently caught up with Alex Grey and Allyson Grey at the pre-party for the Gem and Jam Festival in Los Angeles. During our time together we talked about the power of transformational love, the responsibilities artists have towards society and the incredible potential that emerges when people gather together to make a difference.

When Alex and Allyson first met in a conceptual art class, it was 1974. Both already had a uniquely honed set of skills based on their respective areas of study. For Allyson, it was abstraction, pattern and secret writing. Alex, brought up in the Christian tradition, chose to depict in his art the visionary experience embodied in the "Progress of the Soul," the path of a multidimensional individual in relation to the beloved. Despite their specialized interests the couple explained that at the time, “artwork more concerned concept and meaning than materials and traditional techniques even though [they] were both well-trained on techniques of drawing, design, composition and art history.” Their combined knowledge and shared experiences brought them a new purpose. It was as if, in order to find themselves, they needed to find each other. 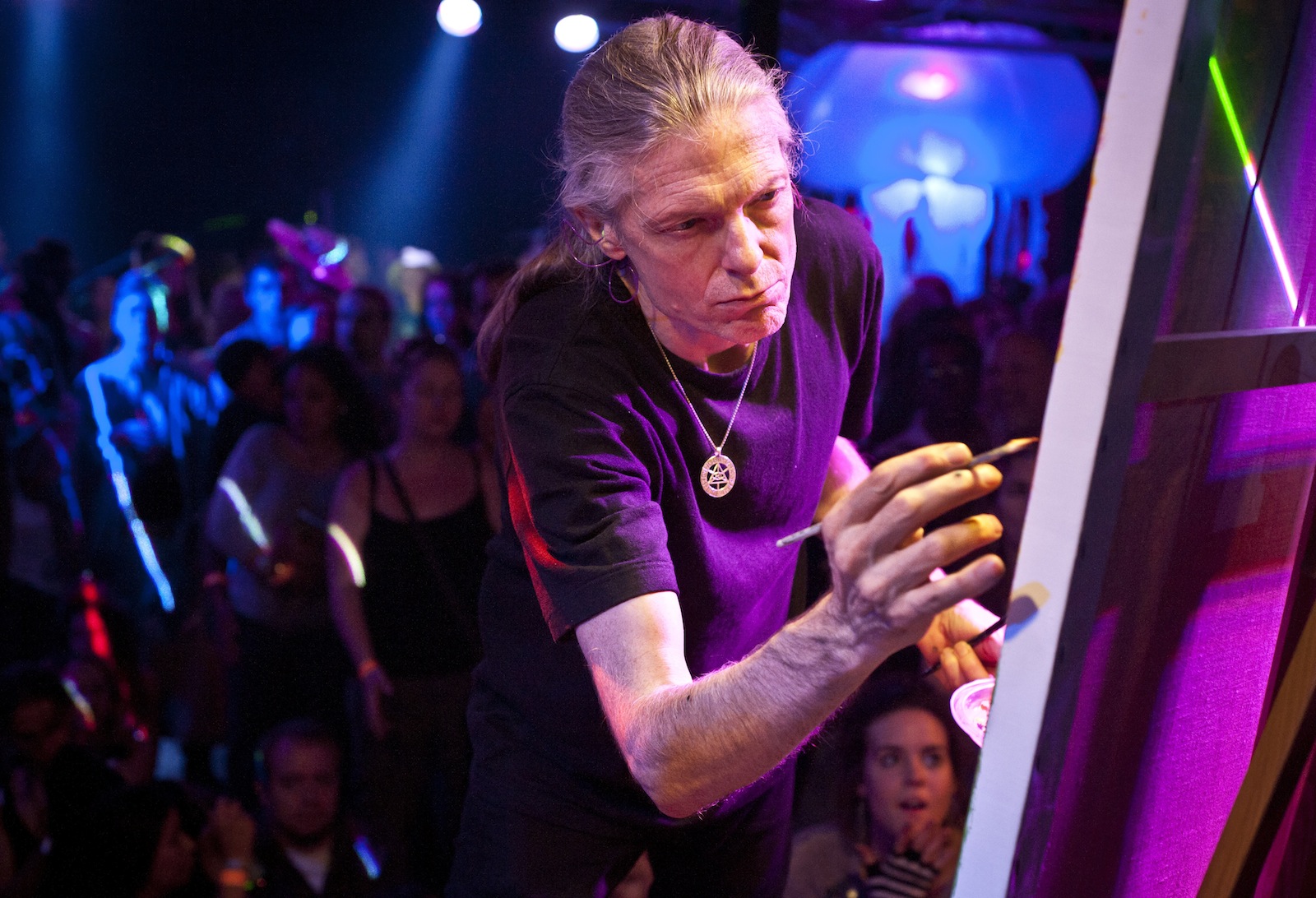 Alex Grey painting in Atlanta. Photo courtesy of the Chapel of Sacred Mirrors.

I asked what advice they might offer to young artists and lovers on their own quest for self-improvement. Here’s what they had to say:

“Follow your passion. Know that an enduring, committed relationship is personally transformative. We become better people through being reflected, like a Sacred Mirror, in the eyes of the beloved. When we love another, we are shown our strengths and weaknesses and we modify our behaviors to become better people.”

Let's fast forward to January 2003, when Alex and Allyson started the Chapel of Sacred Mirrors’s (CoSM) Full Moon Gathering in a Brooklyn loft as “a prayer committee consisting of a few artists, a poet and a shaman.” The shaman of the group, Alex Stark, prepared a despacho (which means "dispatch to the Gods") “with the intention to bring about a permanent home base for the community supporting the Chapel of Sacred Mirrors.” It was an intimate, purposefully meditative celebration that ended with drumming and dancing.

In April, Allyson had a stroke of brilliance in which she recommended posting an invitation to the Full Moon Ceremonies on Alex's website. As a result, attendance grew rapidly and within a few months, hundreds of people were celebrating creativity together in their Brooklyn loft. Since its inception, Alex and Allyson explained that the community of “poets, musicians, performance artists, representatives of all world religions, have shared and prayed at CoSM, first in our studio home, then in Manhattan for five years where all the Sacred Mirrors were on view. And now at CoSM, an art sanctuary on 40 acres in the town of Wappinger, New York. Each move has evolved and grown our community and included more services we can offer our community.” 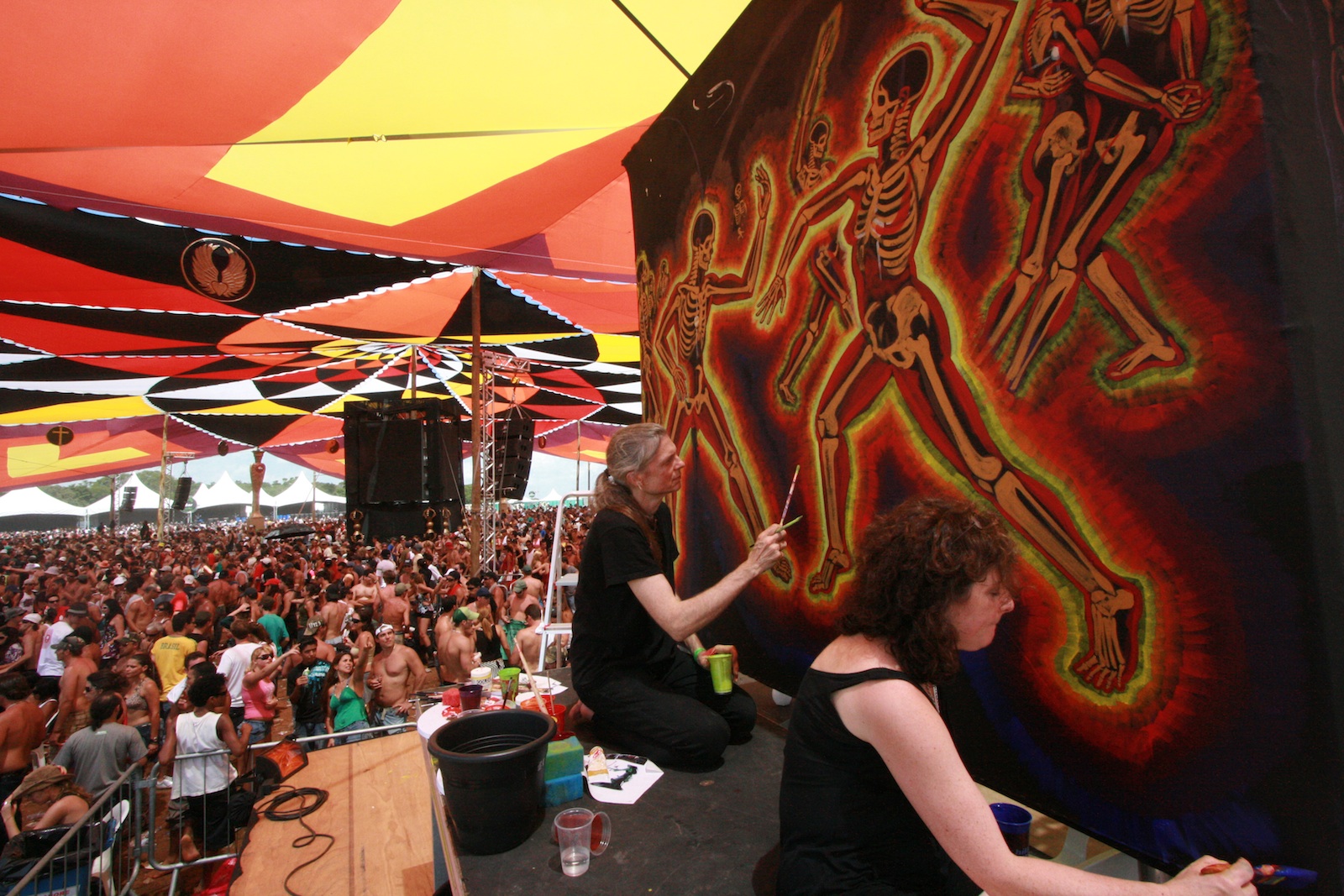 Alex Grey and Allyson Grey painting together in Brazil. Photo courtesy of the Chapel of Sacred Mirrors

The resounding feedback received by the couple is that “CoSM events are uplifting,” but seeing them together I couldn’t help but notice that there’s a reason for this. Put simply, the deep bond they share brightens everything around it and the story that goes with that bond is much like that of CoSM: It’s one of continued spiritual growth and renewal. In their own words, “it is ever ascending and evolving.”

The Artist's Power and Responsibility

To get a better handle on the community and the place artists hold in it, I asked about the potential artists have to drive cultural change. I also asked what obligations artists have towards the larger community. Alex Grey and Allyson Grey thought carefully and said these words. “Make art from what you love, from what moves you, not a sense of obligation," they said. "When an artist makes their most uncompromisingly authentic statement, it touches others. A powerfully influential artist that has touched many is offered greater opportunities to support social consciousness.”

To Alex and Allyson, we all have our own truths. However, they like to teach that “by sharing your unique truth while seeing it as part of a wave of the highest, deepest truth, you are in service to the divine.” The beauty of that idea to me is that the willingness to hear and help others makes others in turn want to help you. In other words, by assisting those around us we can make friends of our neighbors who may support our efforts to change.

“Embedded in a network of social systems, the Buddhist perspective proposes that the Bodhisattva is a being expressing infinite compassion as altruistic action in the tangle of Samsara – the repeating cycle of birth, life and death and reincarnation," they explain. "As a Bodhisattva, we do our best, not for ourselves but for the benefit and liberation of all beings. ” 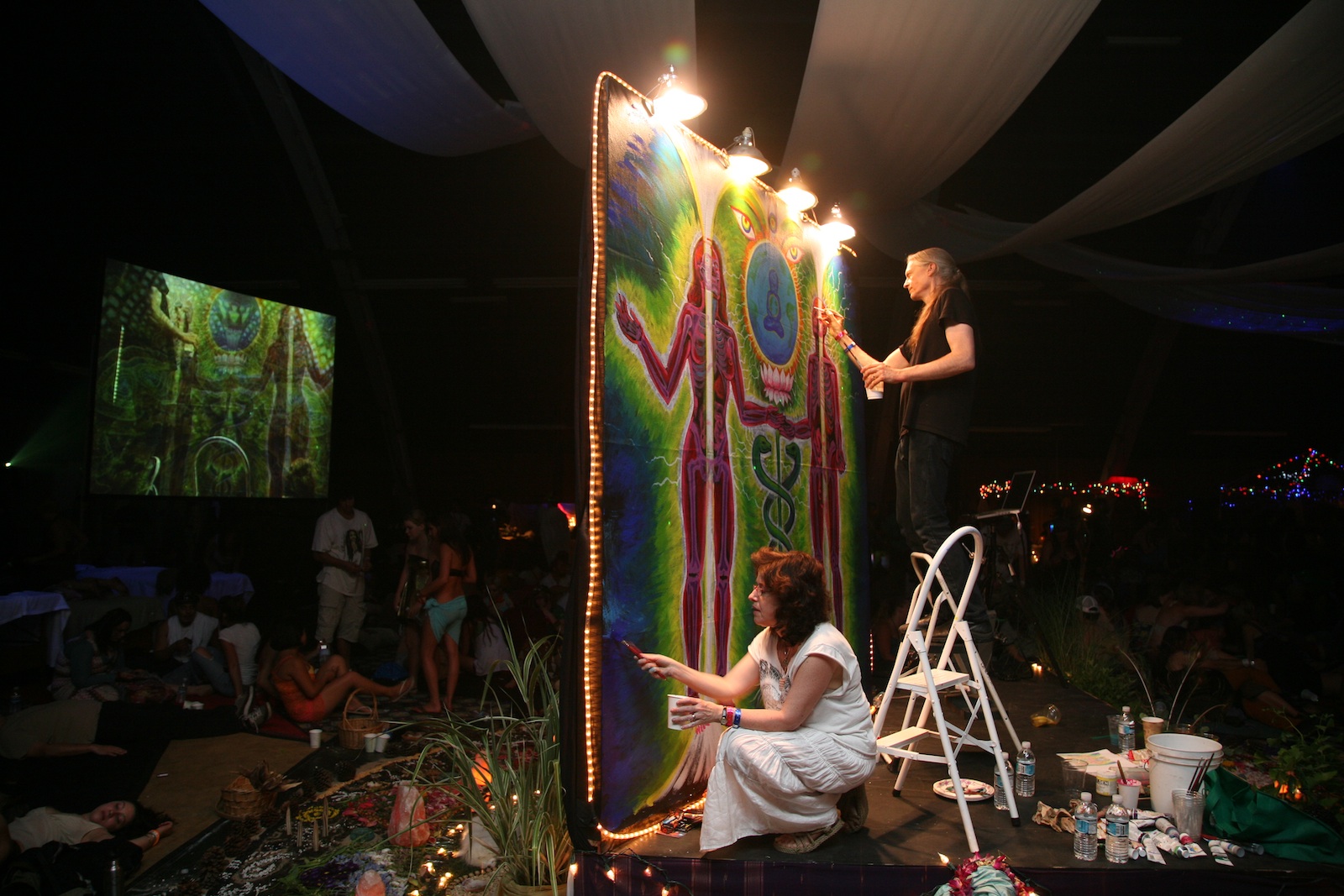 Alex Grey and Allyson Grey painting together. Photo courtesy of the Chapel of Sacred Mirrors

The Festival Community as a Conduit of Human Consciousness

For a duo who has been to so many festivals for so many years, what festival experiences float to the top? Without hesitatio, Alex and Allyson immediately mention their gatherings at CoSM, which have been going for over 13 years. “At the multifaceted events held every equinox and solstice at CoSM,” Allyson pointed out, “attendance can reach small festival proportions. We study the festival model and include our glorious and graciously restored Victorian house for indoor ecstatic dance and the best electronic musicians including Tipper, Gaudi, Ken Jordan, David Starfire, Andralien and many others. Our favorite events are always at CoSM.”

As a “mini-festival” of sorts, these gatherings cultivate and nurture the same streams of consciousness that allow us to understand ourselves through a closer connection with others.

Wondering which festivals they’ve enjoyed together, I quizzed the couple about their most important shared festival experience. Looking this time outside of CoSM, they could have listed dozens of festivals. They didn’t though. Instead, they only spoke of one: The Burn. 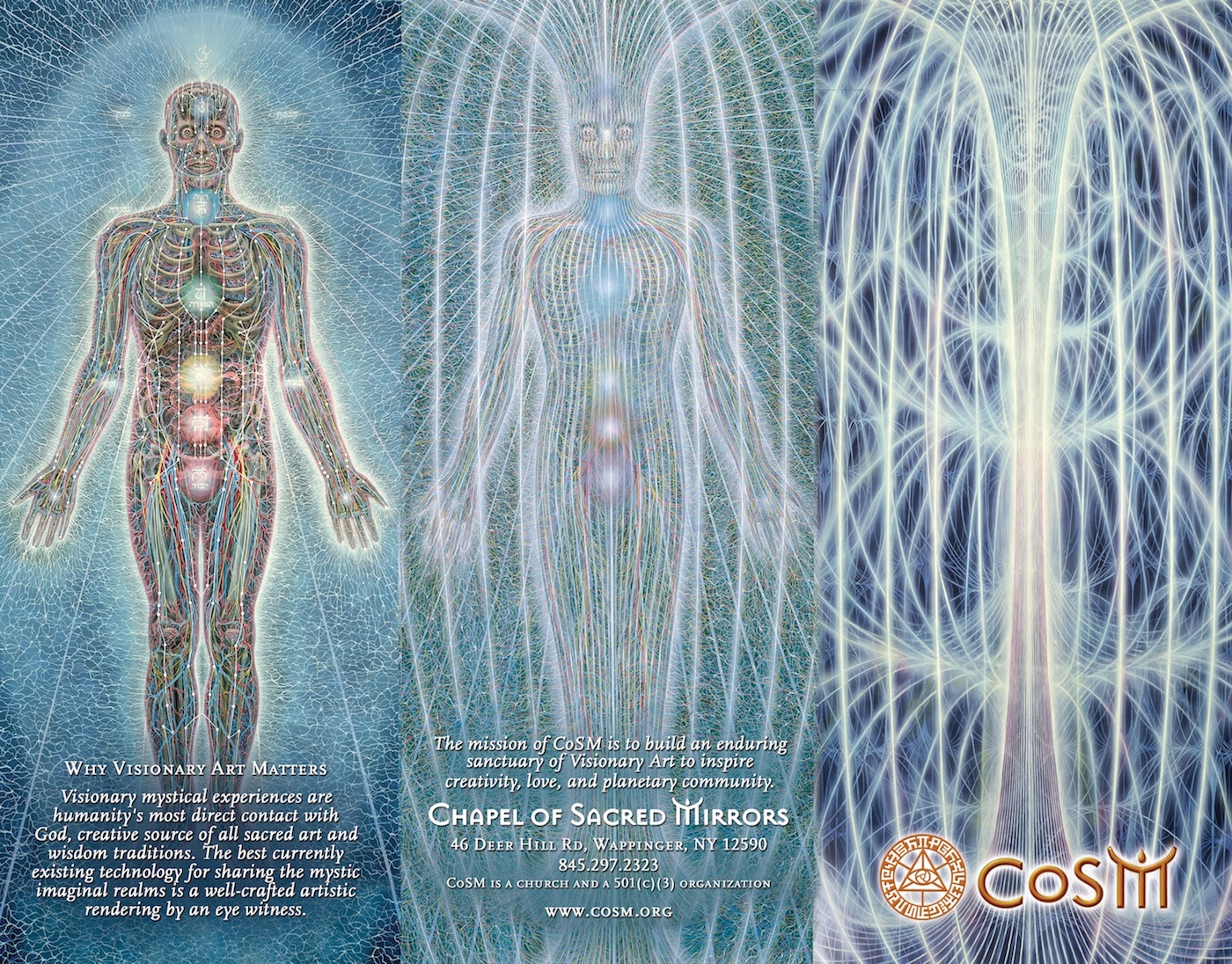 Courtesy of the Chapel of Sacred Mirrors

In 2006, Alex Grey and Allyson Grey co-created Entheon Village, a Burning Man theme camp, with help from the eco-virtuoso Matt Atwood and the Multidisciplinary Association for Psychedelic Studies. CoSM's 60-foot dome offered 24-hour live-painting and a DJ chill space for the week that also included movies, figure drawing with live models and more. Alex and Allyson took many of the lessons of "distributed intelligence" home to feed the developmental appetites of the community and catalyze the evolution of their own organization.

Another hallmark occasion for the pair occurred at Burning Man in 2012. The Area 51/Fractal Nation Camp setup a collaborative masterpiece which they both worked on. The tremendous 32-foot mural, entitled "Star Dancers," illustrates a diverse crowd enveloped in a sort of trans-dimensional boogie. Allyson recalled that it had been displayed “twice on our own stage before 25,000 friends at Tribe Festival in Brazil.” It was also painted (that’s a fourth time!) in Williamsburg at an event for Vice Magazine and the Magic Hat Brewery. Star Dancers is incredible because, like CoSM, it keeps traveling and being reborn in different ways. It was even hinted that “the mural is still underway and may be resurrected at CoSM for us to paint at outdoor summer events.” In what would be a fifth reincarnation, "Star Dancers" keeps twirling and pirouetting to distant locations. It continues to give warmth and hope to transient souls as if to suggest that if we can all learn to love the music we make together, perhaps the dancing never has to stop. The way Allyson sees it? “We are all future star dancers.”

For the couple, Burning Man has become much more than a simple gathering. In their words, “Burning Man is the crowning achievement of freedom and creativity in festival culture…It's a tough ride, can be expensive, and is extraordinary in its management and organization.” It was even suggested that it could be “a model to study” to better understand ourselves and the road ahead.

Looking to the future, I probed into that mushy stuff at the core of festival culture – the love. After all, this pervasive connection linking people of all walks of life offers a different way of looking at the world. According to Alex Grey and Allyson Grey, “a festival with altruistic intentions and actions, that plants seeds of divine possibility in the mind-streams of visitors, offers the possibility of evolving consciousness. Festival grounds around the world can be seen as some of the first crystallizations of planetary culture.”

Through this lens, “creativity is the spiritual anchor for the coming world civilization.” Perhaps, then, the beautiful and mysterious bonds that bud when people gather could one day form the communal sails that carry us to a new global consciousness on the proverbial winds of change.

You can view more of Alex Grey's artwork on his website, while Allyson Grey's work is displayed on her website.