The Commonalities of Burning Man and Kumbh Mela

Editor's note: Being the cofounder and editor-in-chief of the world's best festival website provides some intense, incredible collateral benefits. One of the highlights of my life was making the pilgrimage in early 2013 to Allahabad, India for the world's largest festival, Kumbh Mela. While there are Kumbh Melas about every three years in four different locations, I was able to experience the Maha Kumbh Mela that happens only every 144 years. I wrote a number of articles while at the festival and I felt this one below needed to be dusted off and republished, because this year there's a smaller Kumbh Mela – smaller meaning just tens of millions of people – at Nashik on the banks of the river Godavari at the exact same time as Burning Man. The month-long Kumbh at Nashik runs from mid-August to mid-September while Burning Man is August 31'til September 7. If you know anyone in our Fest300 community who is making the trek to both Kumbh Mela and Burning Man this year, wow, please send them my way as I'd love to hear their experience of the juxtaposition of this ancient and modern pilgrimage that proven to be such a transformative experience for so many.

When it comes to festivals, I tend to use a pair of Burning Man glasses – or, better yet, goggles – when comparing and contrasting a  celebration in Manchuria or in the tropics with that annual art festival in the Nevada desert. But, the Hindu-celebrating Kumbh Mela gave me a new lens in which to view my favorite annual fest as I now understand Burning Man to be a “pagan Kumbh Mela.” 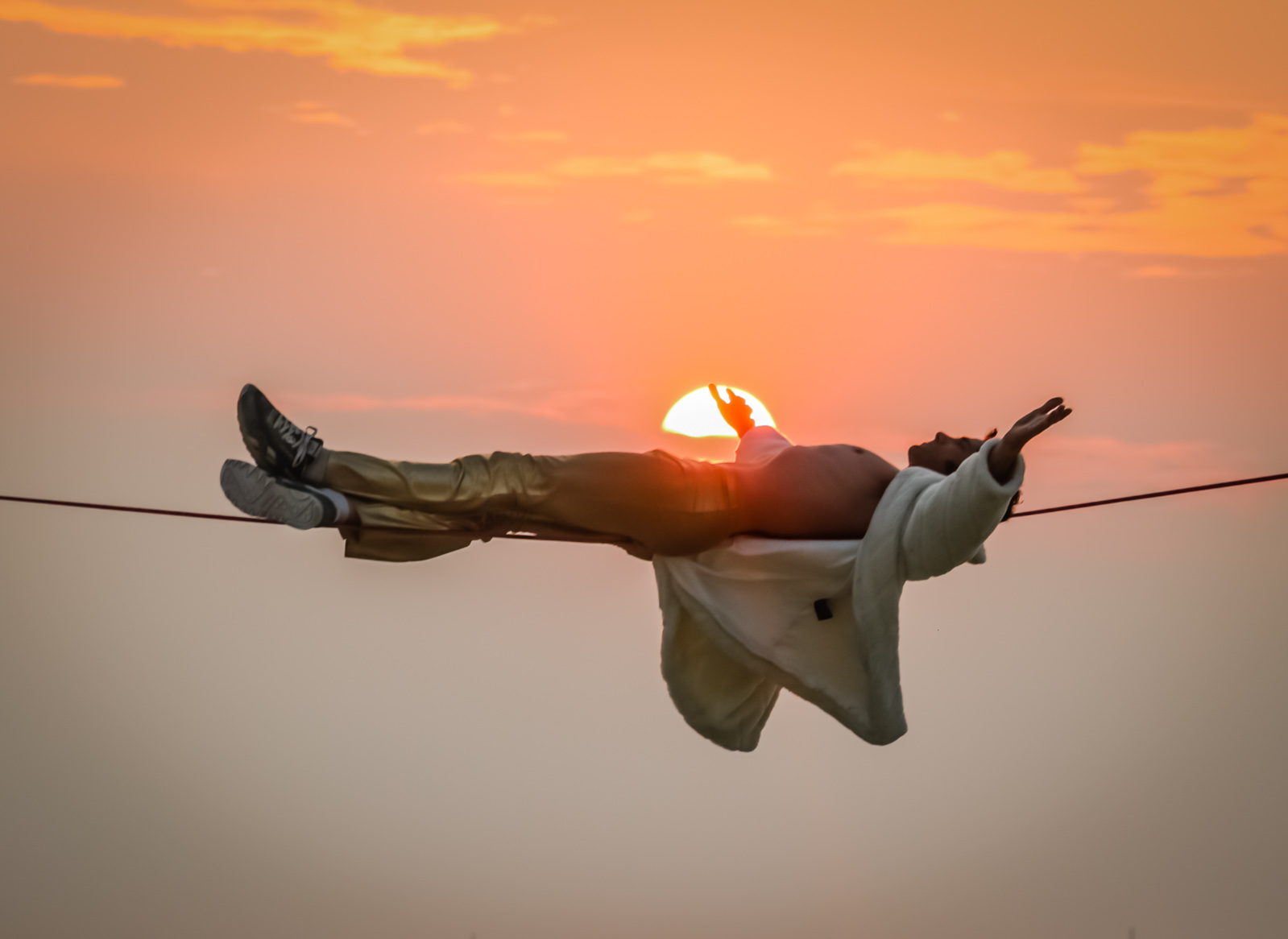 Sleeping during the day is common at Kumbh Mela and Burning Man as the carnival atmosphere is electric at nighttime.

The most obvious commonality is that these two festivals require a gargantuan effort to create a temporary tent village. The logistics and commitment of volunteers to create Burning Man for 70,000 people in the inhospitable high desert is mind-boggling. And, we’re proud to say that on Burning Man’s peak night, Black Rock City (the name of the Burning Man village) is the third most populous city in the state of Nevada. But, that’s child’s play compared to Kumbh Mela which, on the most auspicious bathing period, welcomes approximately 30 million people on that day alone, made it the most populous city on earth on February 10. And, since the Mela is lasting 55 days this year, as compared to a week and a half for Burning Man, the number of visitors over the course of that time is estimated to be as much as 100 million devotees. 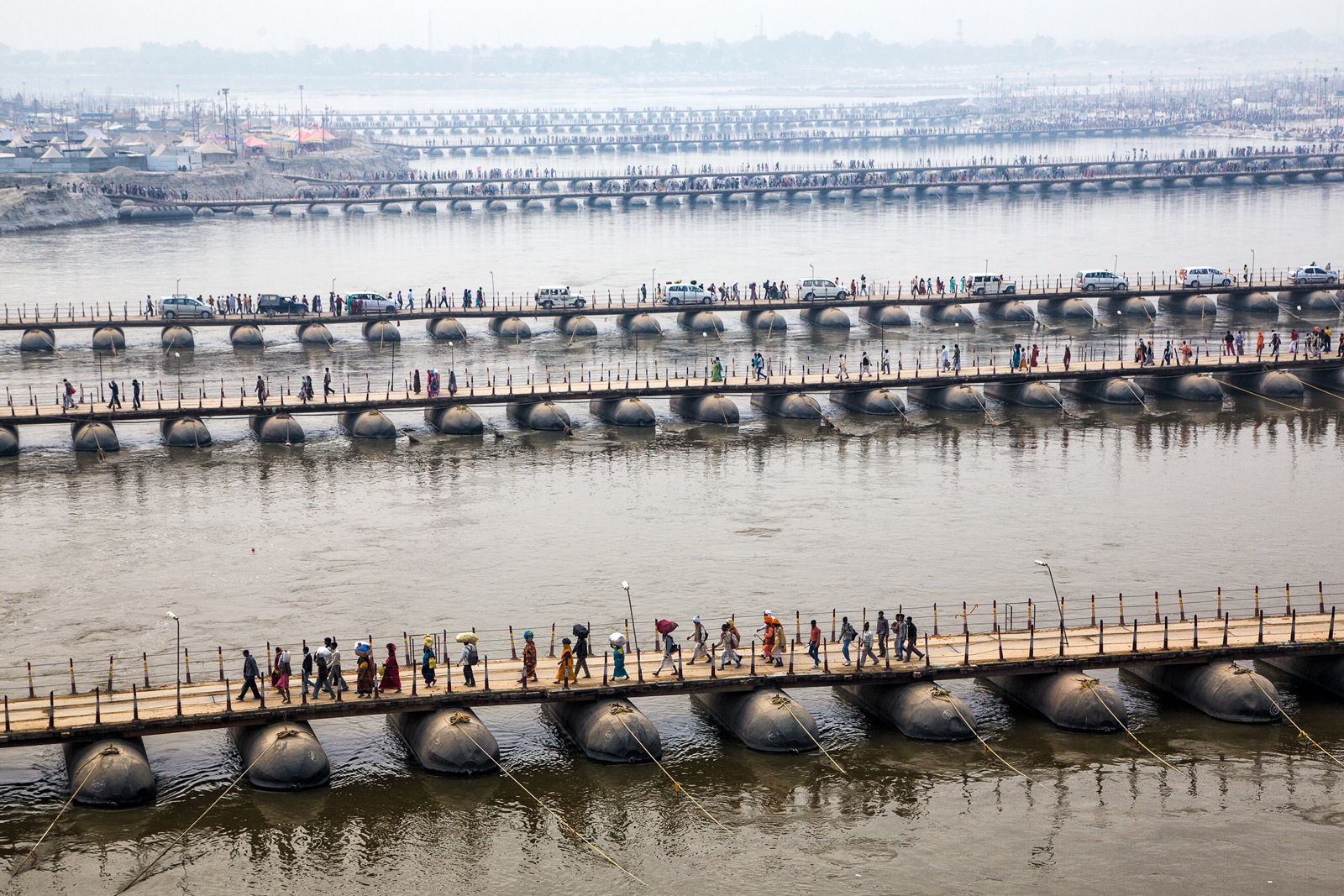 Both festivals are visually spectacular and both have afternoon dust storms. They’re places where nude isn’t considered lewd. And, you might be surprised that Burning Man has many more yoga classes per capita than does this largest festival in India. I will also say that Burning Man has gotten the bottom of Maslow’s Hierarchy of Needs right with ample porta-potties, ice and water, and morning mochas available for those caffeine addicts. At Kumbh Mela, unless you’re connected to a camp, you may be doing your bathroom duties partially publicly in a trench next to the beach. But, due to thousands of years of perfecting, the Mela definitely has gotten the top of Maslow’s pyramid right (maybe turning it from self-actualization to self-transcendence).

I know Burning Man founder Larry Harvey didn’t have Kumbh Mela in mind when the he first burned an effigy on the beach in San Francisco. This blossomed into a festival dedicated to using art as a means of one regenerating oneself, but the similarities are uncanny and say something about the commonality of enduring human ritual. 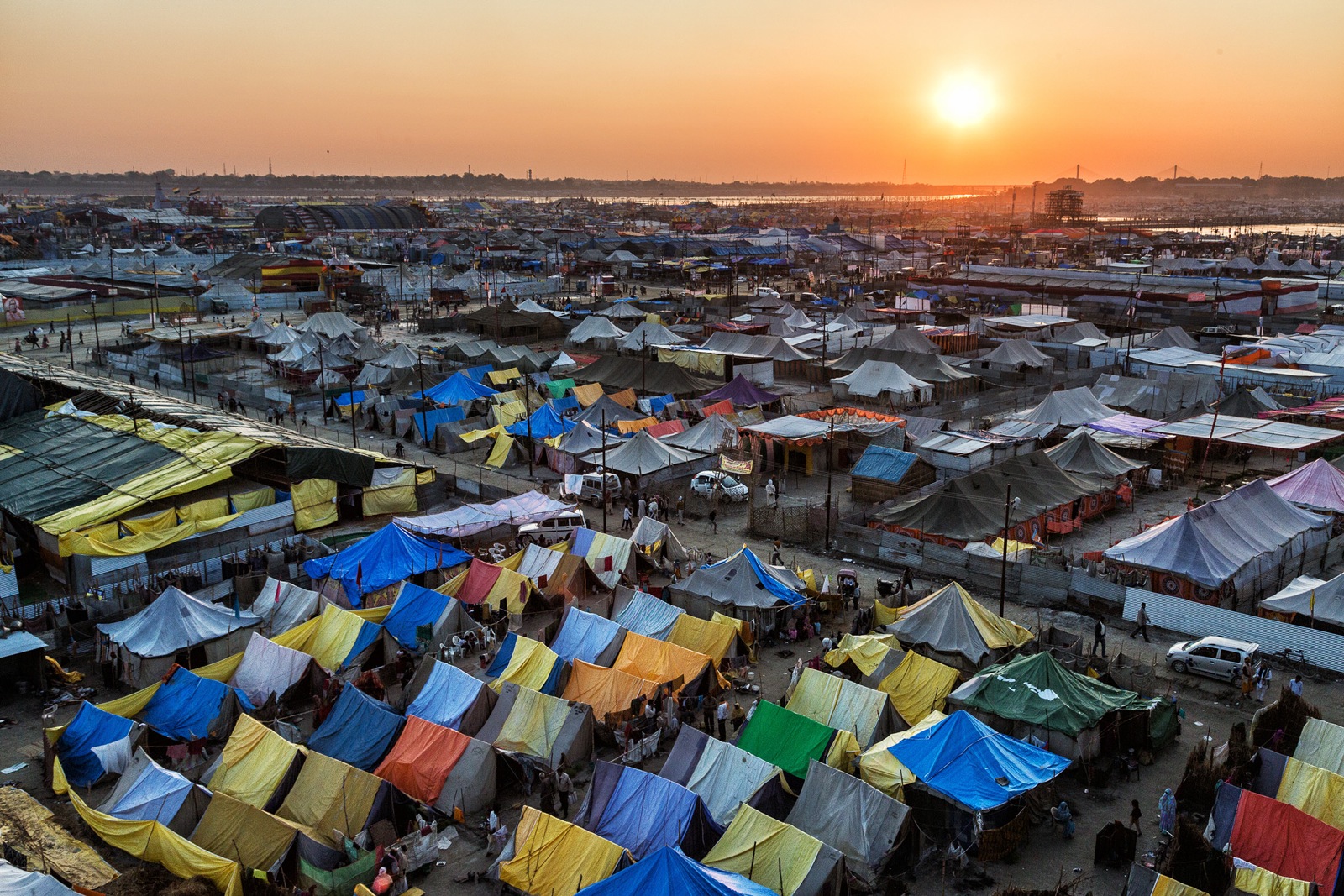 One of the basic commonalities is the nature of short-term accommodations, typically tents, which house the attendees. 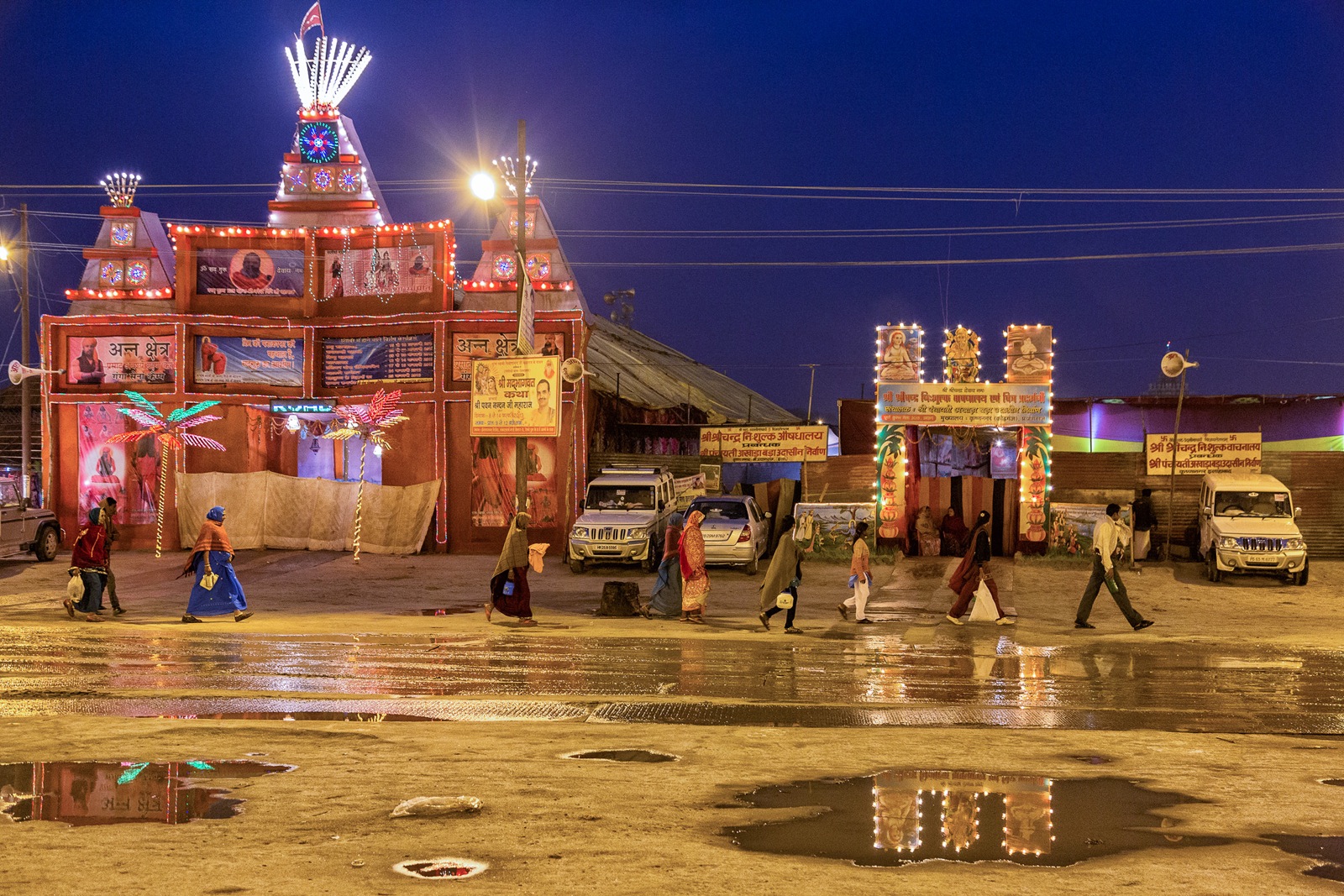 Both festivals have theme camps; Burning Man’s are irreverent while Kumbh Mela's are reverent. 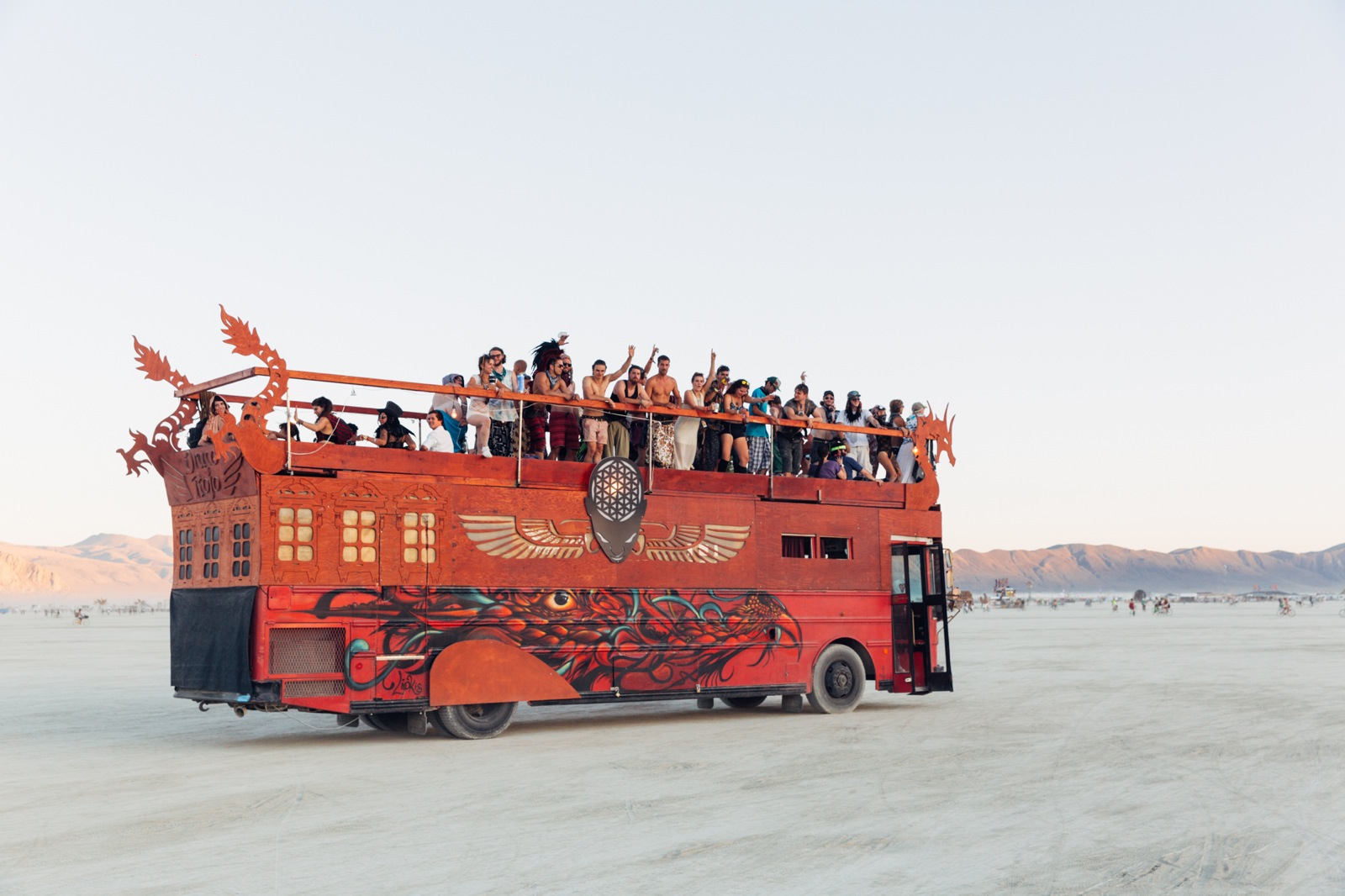 While Burning Man is only 29 years old, it did arrive in the era of cars so Burning Man has perfected the idea of the art car while Kumbh Mela is just getting the hang of it… 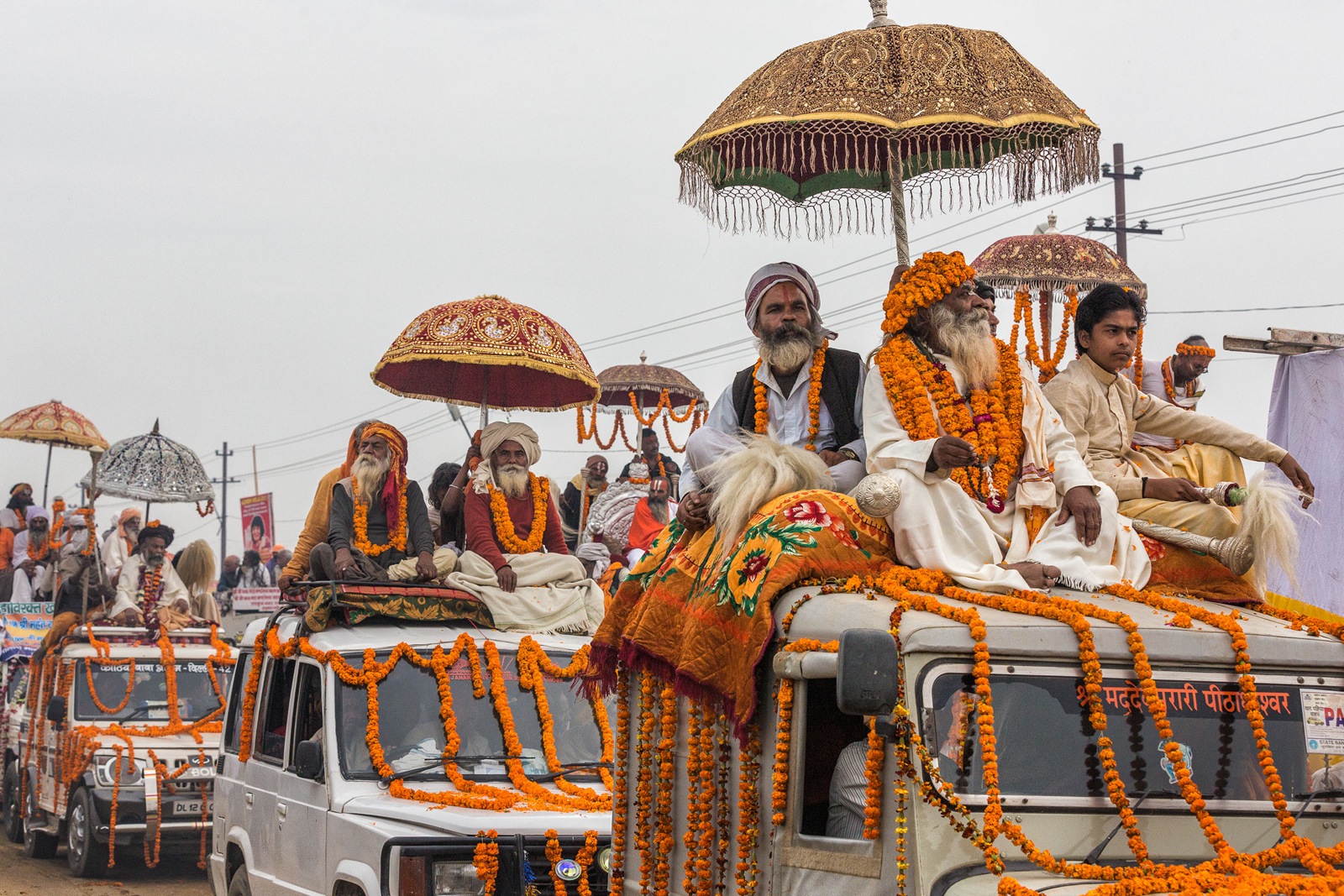 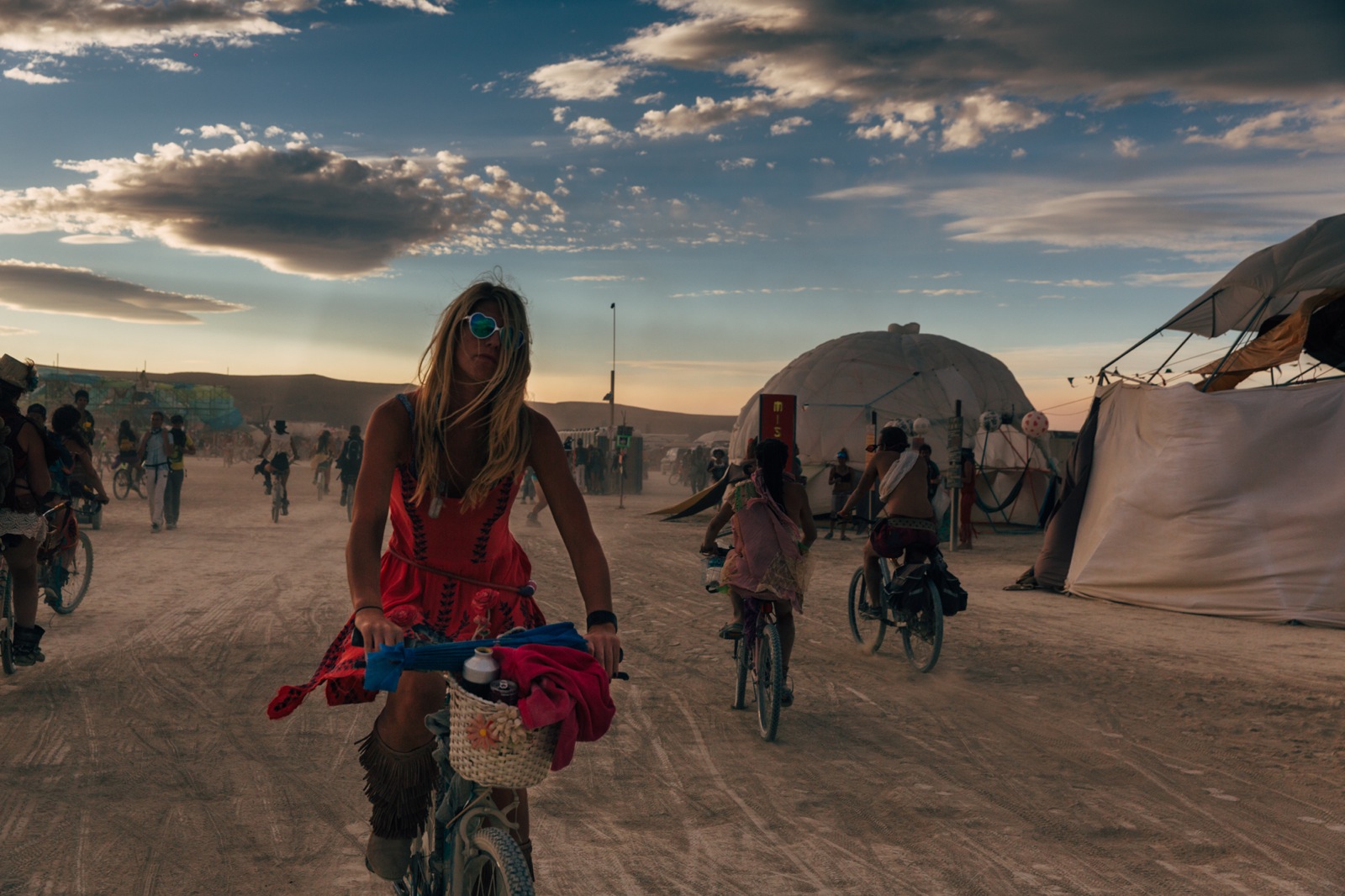 Given that Kumba Mela is spread over 50 square kilometers (Burning Man is over 7 square miles), having a bike or rickshaw is a preferred means of getting around but you don’t see too many two- or three-wheeled vehicles at Kumbh Mela. 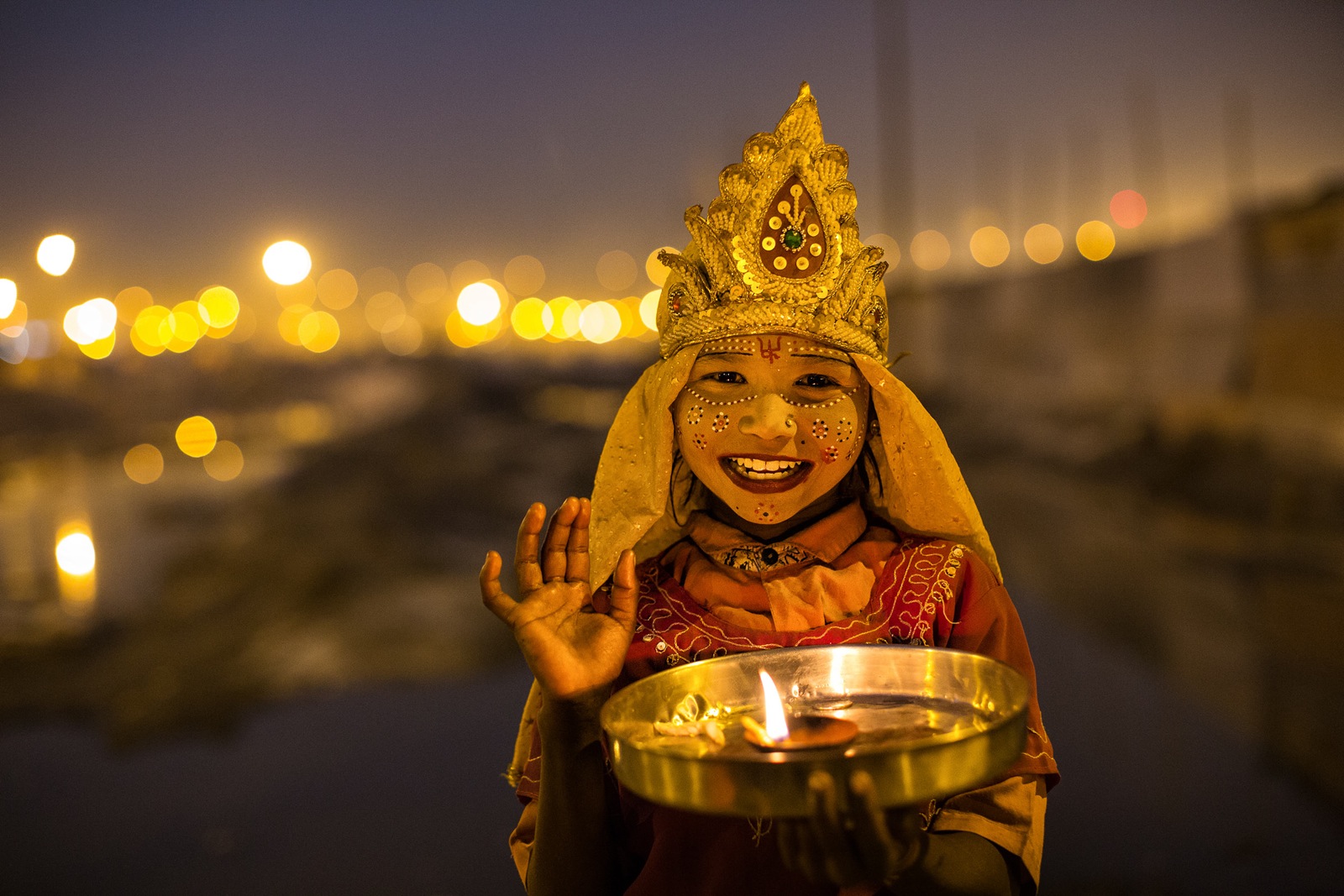 Burning Man has 10 Principles that guide how the festival and organization operate. One of those Principles is the “Gift Economy,” which means that virtually everything is free in Black Rock City. While generosity is part of Kumbh Mela’s core culture, there are all kinds of lovely Indian spices and gifts for sale at the festival. 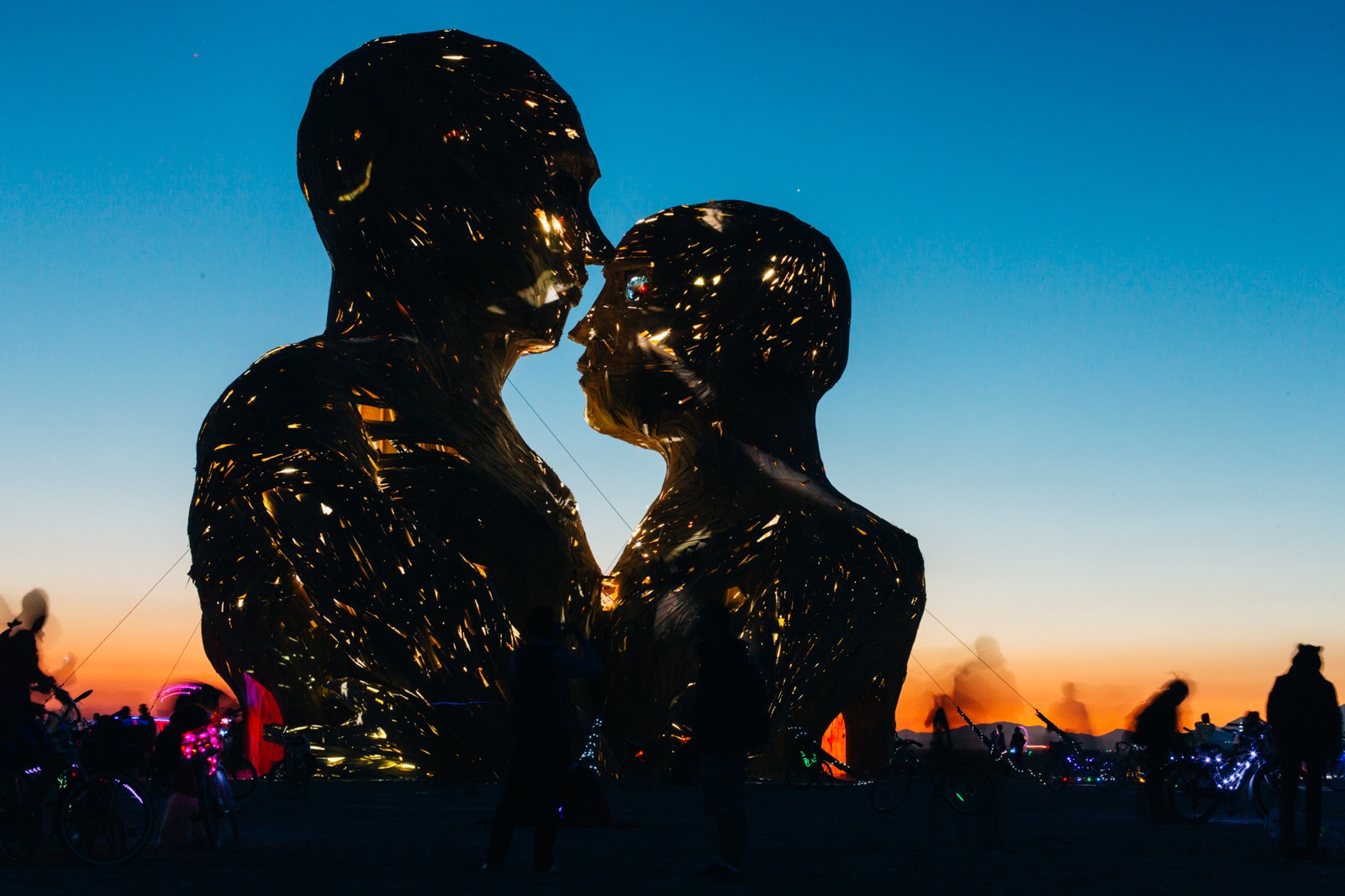 At the core of the Burning Man experience is a reverence for art with hundreds of art installations throughout the grounds. It’s more of a rarity at Kumbh Mela. 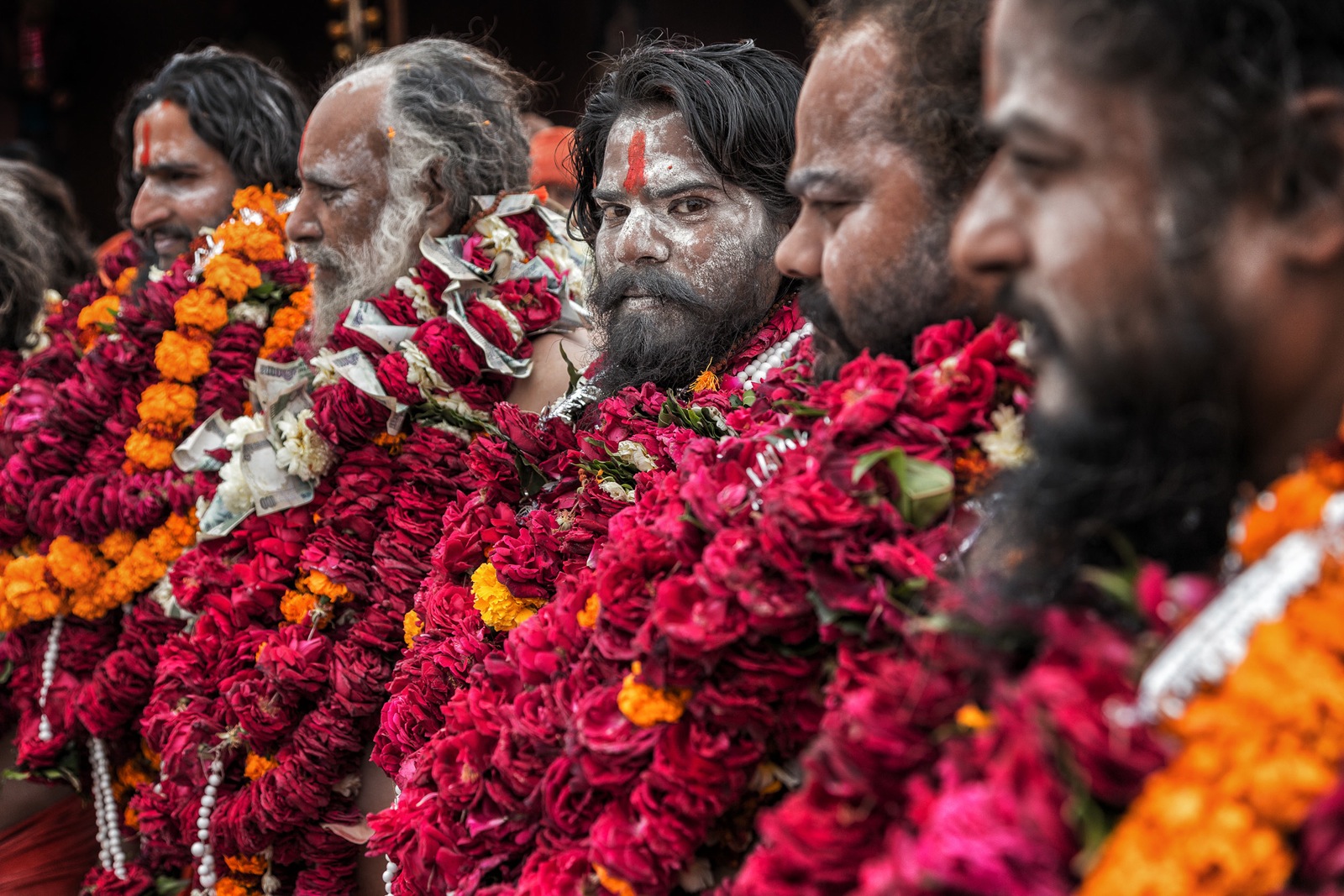 While Burning Man may win the yoga teacher per capita competition, no place in the world has more gurus per capital than Kumbh Mela. 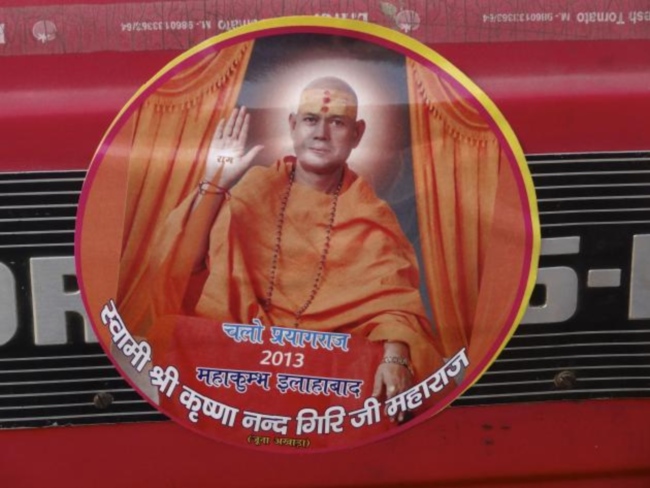 Burning Man has a wide variety of means of communication in Black Rock City whereas posters define the primary means of mass media at Kumbh Mela including a posted graphic directly on a tractor. 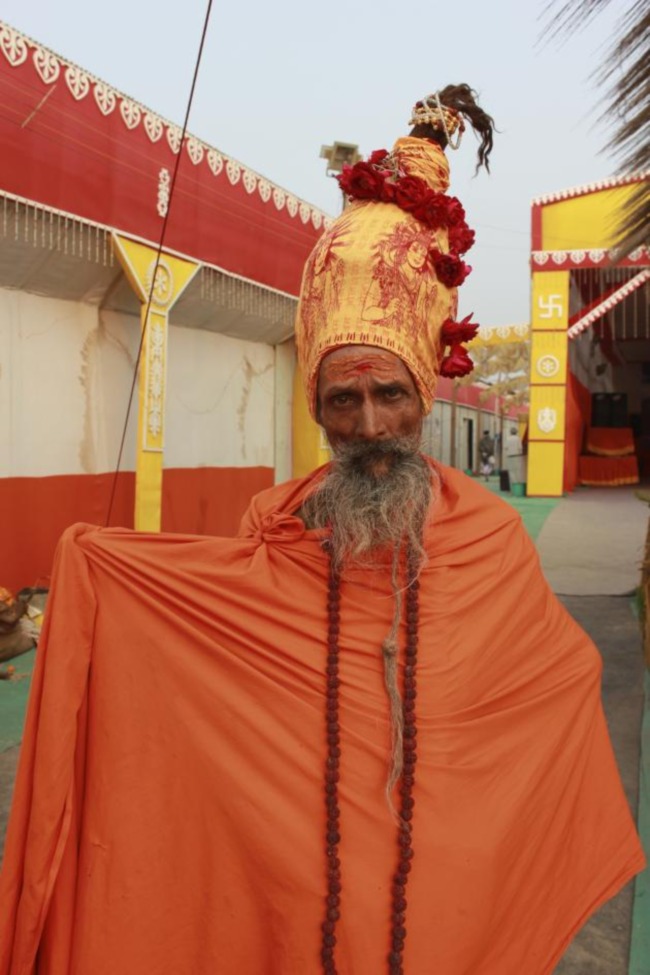 Fashion is fundamental at both festivals. This gentleman could fit into Burning Man or Kumbh Mela, but what makes you know this is Kumbh Mela is that under his garment he has his arm in the air and it’s been in the air for more than two dozen years such that it’s stuck and no longer usable. Very common to see this kind of bodily devotion at Kumbh Mela. 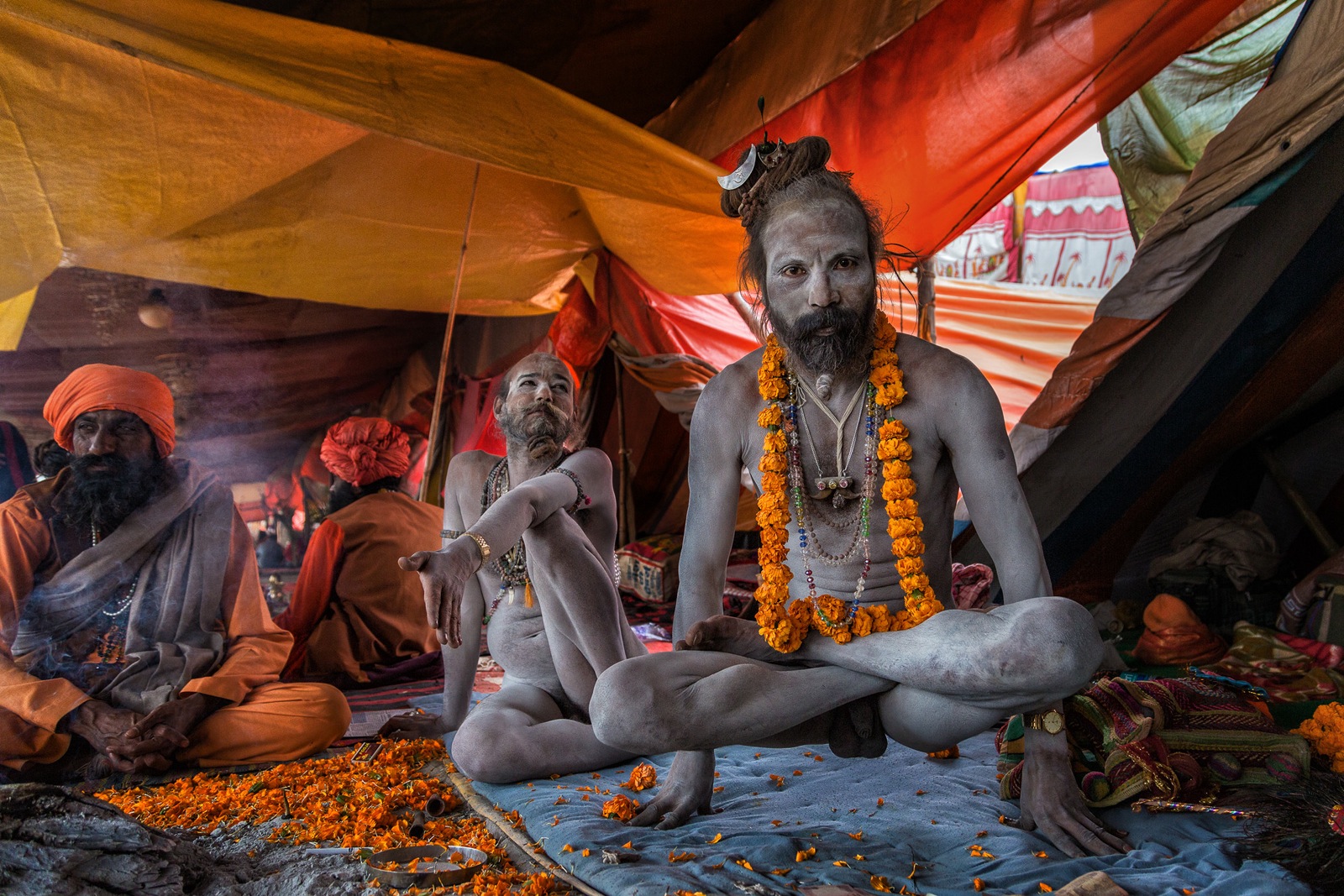 The first time I went to Burning Man in 2000, I said it was like dropping into that galactic bar in the first Star Wars movie. It can feel very otherworldly at both of these iconic events. 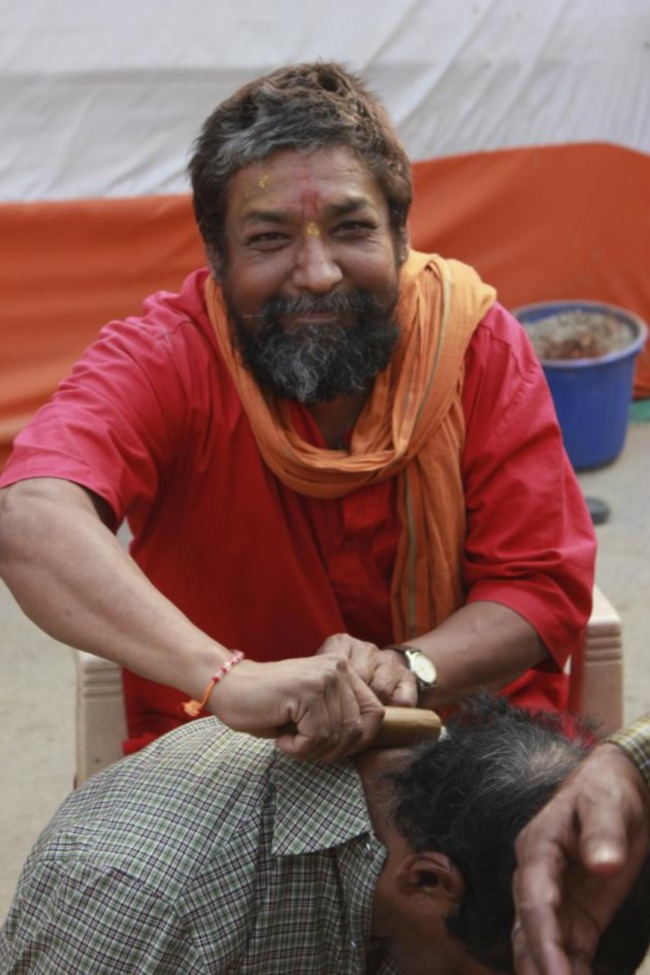 Holistic healing is a big component of Burning Man and Kumbh Mela. This healer was providing common Ayurvedic massage and medicine to anyone who was looking for some help. 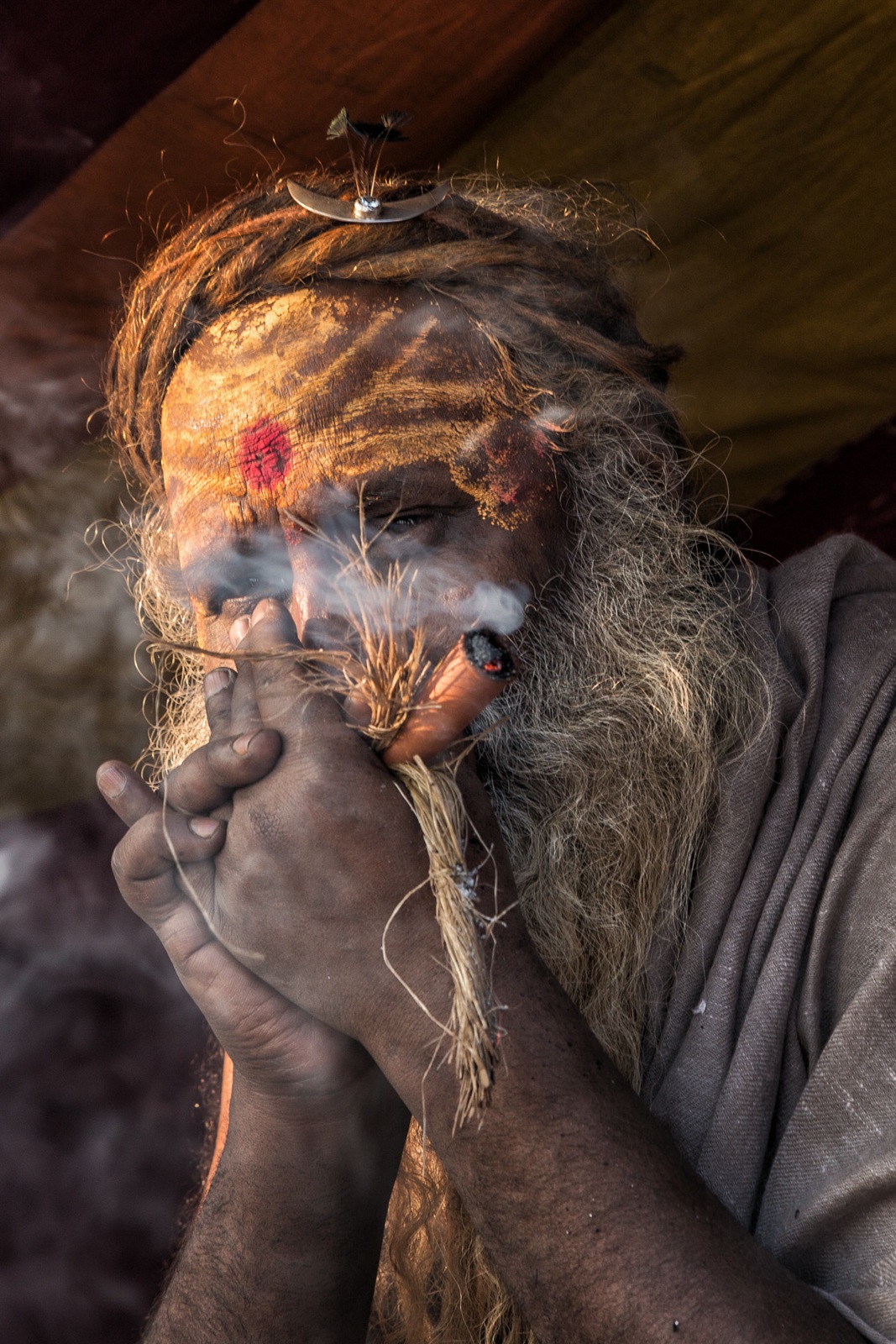 I think I went a week without a sip of alcohol as both Varanasi and Kumbh Mela are pretty much dry. Can’t say the same about Burning Man. But, you can find ganja (a Sanskrit word, not Jamaican) on the “Gang-jah” (the way Indians pronounce the Ganges River) at Kumbh Mela. 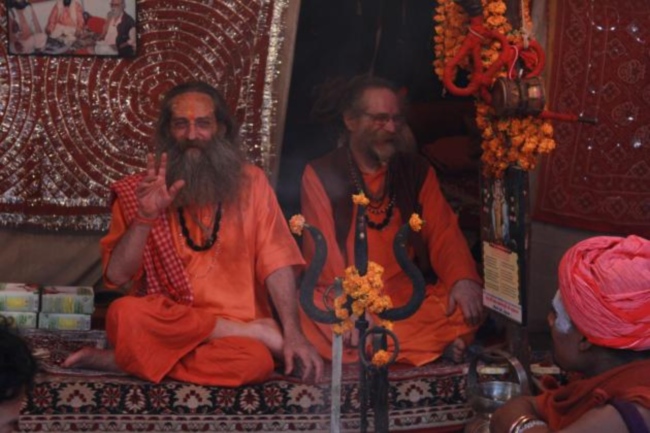 During my four days at Kumbh Mela, I met less than 10 Americans and only a couple of gurus who hail from the States. But, these American Hindu gurus sort of reminded me of some of the flavor of Burning Man: Baby Boomers who still aspire to be hippies. Burning Man has more bourgeois bohemians than Kumbh Mela. 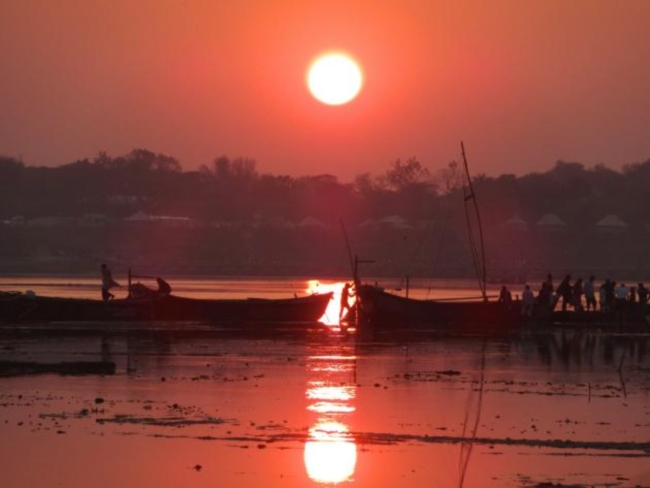 While Kumbh Mela may have a reverence for everything relating to the Hindu religion and art is a religion at Burning Man, both celebrations place a certain appreciation on the power of nature. This is a shot from the most healing spot, the Sangam, where the Ganges and Yamuna rivers come together, as well as the mythical Saraswati river.

The mark of a spectacular festival is enthusiasts tend to be vigilant about making sure it continues to evolve into something better. You don’t hear, “It’s not like it used to be,” at festivals that are on the decline. You will forever hear a few people grousing about how Burning Man or Kumbh Mela are ruined, but what they usually mean is that it’s more popular than ever and there are some downsides to that popularity.

Yes, both Burning Man and Kumbh Mela have become cultural icons within their very different worlds, but they’ve also stood the test of time and the risks of outside influences. And, they both make it on my Top 5 list of the festivals you must visit in your lifetime (well, truth be told, Kumbh Mela should be visited during one of your lifetimes….LOL). To learn more about Kumbh Mela, check out some of the other Fest300 articles I’ve written from the festival. 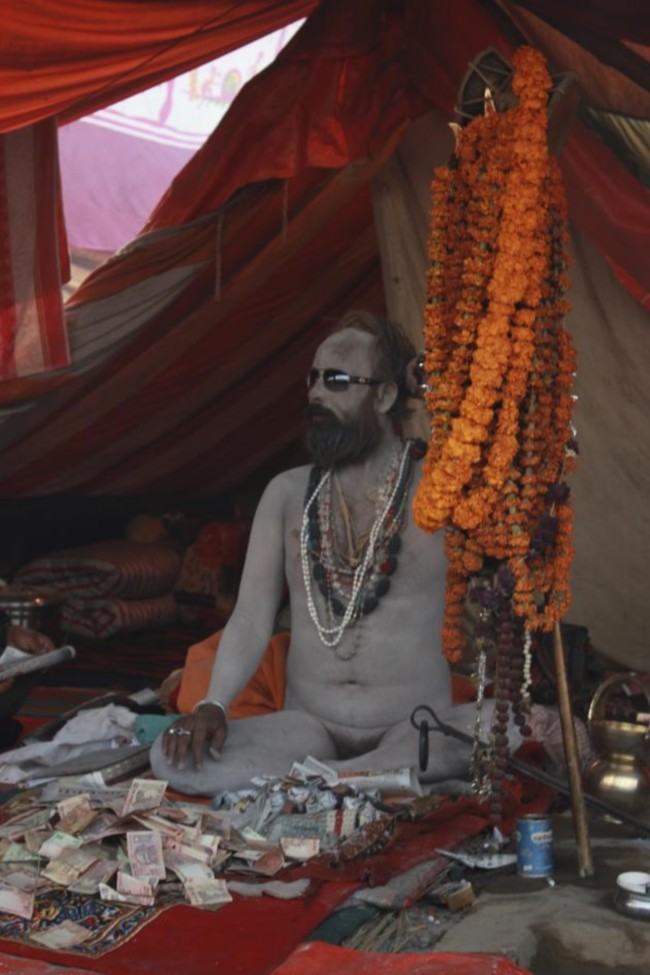 Is this Burning Man or Kumbh Mela and what are the clues?