What The Festival Is the Perfect Place to Make New Friends

Tucked within the farming community of Wasco Country, Oregon sits four-year-old What The Festival , a progressive exploration of music and interactive participation. I'd been hearing stories about WTF from my friends and fest family for the last three years. The world's largest wading pool? Hookah Lounges and Illuminated Forests and The Northwest's largest Disco Ball? I couldn't deny that something unique seemed like it was happening without me, and I wanted in.

In 2015 I decided to stretch my legs, shake off my WTF virgin jitters, and make a pilgrimage to the sold-out event. After calling in a couple of favors, I had procured a 27-foot Jamboree and three experienced festival friends. I filled up the Jamboree with food, mixers and Jell-O shots and headed out to see what the fuss was all about, pulling up to WTF on the Summer Solstice.

We had all opted for what is known as the “OMG” pass, which included a lot more perks for the money that of the GA ticket. The OMG pass came with coupons good for redemption at the Oasis spa (a mobile bathhouse), the Shinto A Go-Go (an Asian tea and miso lounge), the Casbah Hookah Lounge, a few drink tickets and a bag of ice. All sounded good. After a short line at check in, we were guided by the friendly staff to our new RV boutique camping area – our home for the next four nights. The RV boutique camping included electricity, parking next to the entry gate and Splash Stage, and a concierge who went into town once a day to get items that you needed. Need a bottle of Beluga Caviar and Dom Perignon 55 to wash it down? They were on it. We parked the camper, turned off the engine, and geared up for our adventure.

After a quick set up, a change into warmer clothes, and a couple of mystery Jell-O shots made by my Eugene-based co-pilot, we were ready for action and headed out into the night. For me, a festival is only as good as the people who are there to experience it; neighbors can be a integral part of your journey. We were greeted by some of the coolest people you could've met at a festival, and after handshakes, hugs and jokes, we felt right at home and decided to explore a bit and see what was going on.

Exploring WTF's immersive layout was easy. Seven stages featuring a diverse lineup of electronic music kept the air alive almost all hours of the afternoon and night. When the day stages such as the Splash Pool closed, the nighttime WTF Stage and Effin Stage started up. Other areas such as Equinox Stage featured performers from 3 pm to 3 am. Of course there was the dilemma of making choices between the artists (2015 featured Keys N Krates, GRiZ, Big Gigantic, Rob Garza, Thomas Jack, ODESZA, and more) playing at conflicting times on different stages, so I just wandered into what I was feeling at the moment, and wasn’t disappointed. There were so many things constantly going on, if you missed something amazing in one place, there was something equally mind-blowing in another. 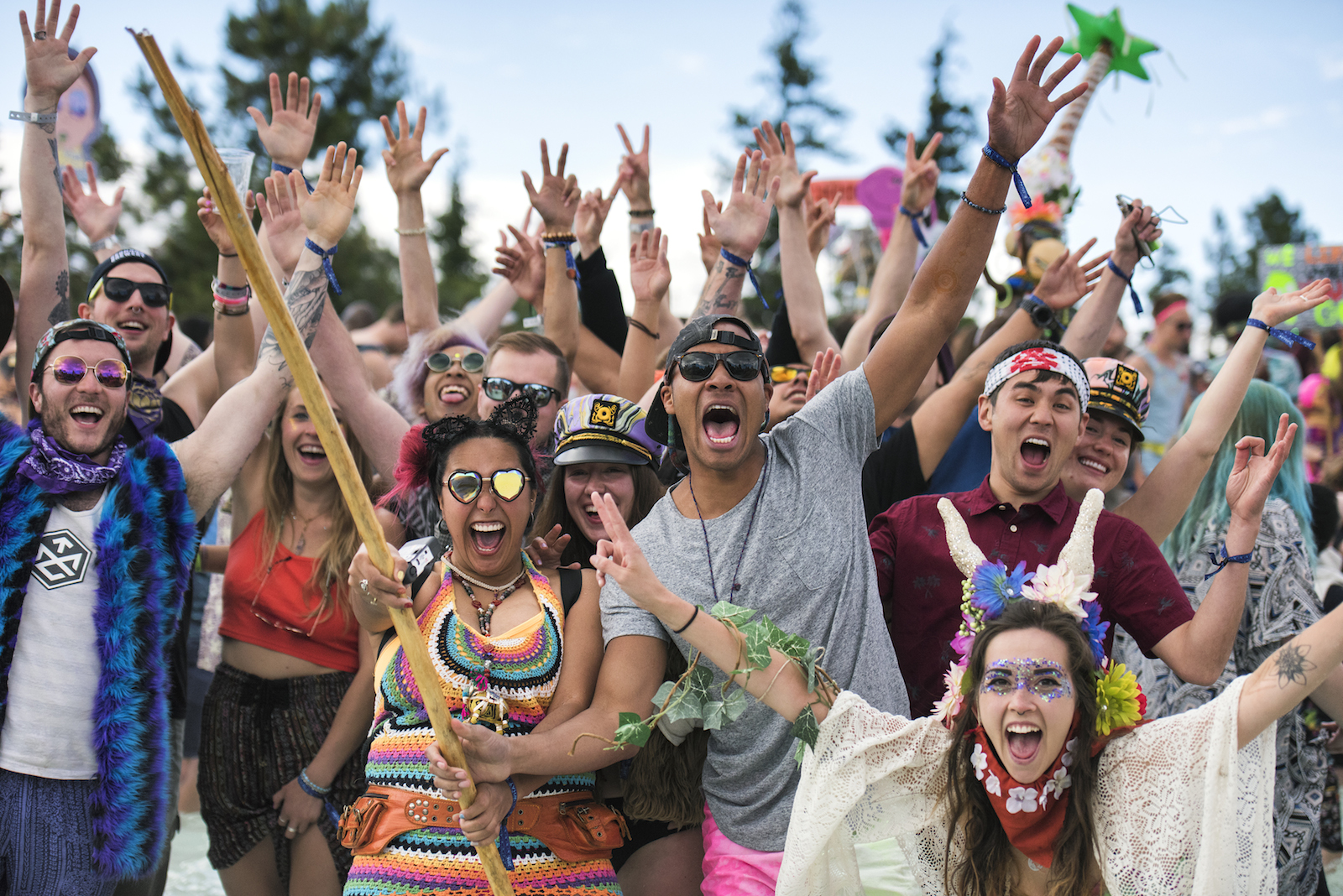 Aside from the music, the LOL Stage in the daytime offered up cool workshops on everything from yoga to break-dancing. It felt like we were at a private adult summer camp with thousands of our closest friends. The Illuminated Forest was a choice place to grab your friends and get lost. Filled with glowing eye candy, lounge stations, 3D projection mappings and interactive works from artists, late-night exploration into the forest became a ritual thing. Everyone was constantly immersed in the visual and aural art throughout the festival, which made for futuristic, psychedelic and interactive experiences throughout. 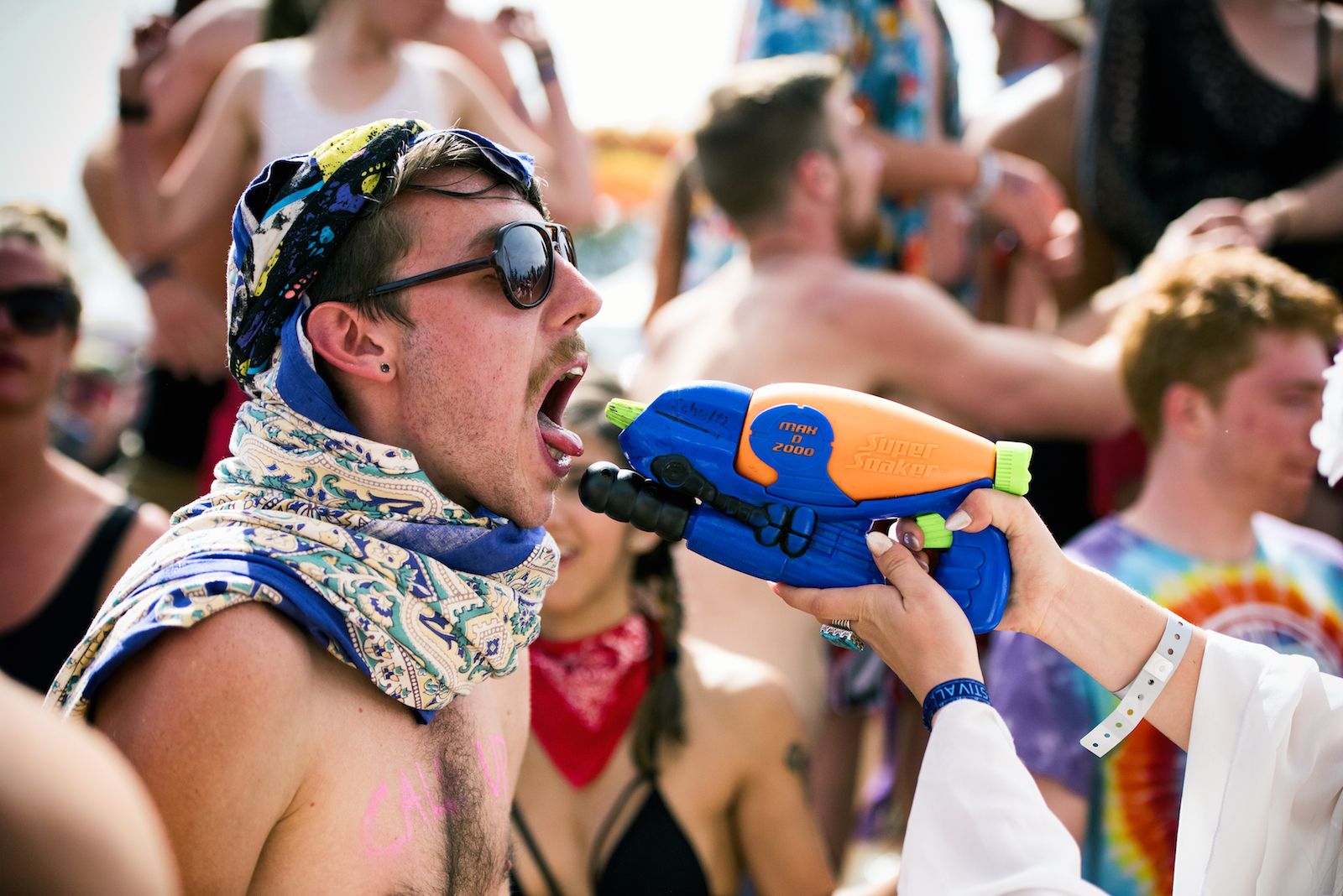 But even more retreats from the overall scene awaited. The Shinto A Go-Go offered both a nice daytime oasis and downtempo DJs during the night to keep the vibe going. The outdoor lounge was filled with beautiful people warming up with tea and conversation. I spent a good part of Saturday night just relaxing in between Big Gigantic and Rob Garza, meeting and talking to amazing people, like a Cirque du Soleil performer from Spain who told me stories and made me feel right at home. On the way back from the Forest, the Silent Disco held under the Disco Ball from 12 to 4 am created a unique, hushed place for people wanted to keep the party moving.

In fact, there were so many cool things to do, there was no way to experience them all. I spent most of my daytime poolside. Why? The Splash Stage lineup was filled with hooky beats and a tropical vibe. Thomas Jack's Tropical Pool Party was the place to dance the Sunday afternoon away, where music worshipers filled two wading pools outlined with wooden decks and danced with whimsical inflatables, totems, and Super Soakers, Spring break-style. I watched with a permanent grin on my face as I saw glimpses of my new friends, between the dancing people, playing cocktail pong in the far end. I caught myself wishing I could be at this pool party every weekend this summer. After hours of dancing I left happy but punchdrunk tired and went back to the RV to charge up a bit for ODESZA. The mood at the RV lot was perfect: Blankets were filled with friends smoking hookahs, laying and laughing in the early evening sun.

My favorite thing at What the Festival was definitely the people – and, as a photographer who attends and shoots many festivals, I rarely feel like the crowd was among my favorite parts of any festival. Yes, I love the family I have at other festivals, but at this gathering, old and new faces came together as one like never before. What noticeable positive vibe. Yes, I went to hear my favorite music, but now I just miss my new friends – our RV neighborhood even plans to hangout together again. We became a community. We are a Naked Mom, Whippet Fairy, Peaches and Sugar Bear. We are a contraband pizza shared with 10 people. We are a RV that watches and holds a friend's gear bag when he or she cannot find their tribe. We are the dancing fools that are Kung Foo Fighting to GRiZ on a Friday night in the cold and loving it. We are old souls blending in a new experience, and for that I say kudos to WTF.