Why Telluride is the Best Film Festival in the World

“Best” is a loaded, subjective term. But, bloggers are subjective just like Brazilians are sexy. So, I’m going out on my subjective limb to proclaim that there’s no global film festival better suited for the non-industry cinephiles of the world than Telluride. While that may be a bold statement, let me outline 10 pragmatic reasons for those who prefer evidence to opinion.

1. You’re surrounded by nature buffs. Nestled high in a Colorado mining town oozing with charm and natural wonders, there’s no comparable film festival in the world with this kind of backdrop. The gondola that takes you to the Chuck Jones Theater on other side of the mountain provides a stunning view of the Telluride valley. When you’re fitting in four films a day, there’s not a lot of time for mountain biking or hiking, but you can run along the town creek, up to a waterfall a mile or two away, or you can drive an hour to the bucolic Dunton Hot Springs and bathe in nature while taking in all the beauty that surrounds you. 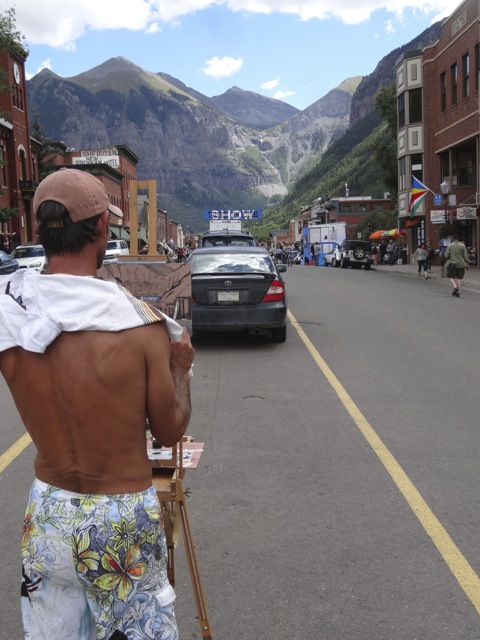 The beauty that surrounds Telluride is so sensuous you may pull out a paintbrush or a fork to capture or digest it.

2. You’re surrounded by film buffs. Oscar Pundit. That’s my Telluride name (just like Burning Man has Playa names). I’m not the only cinephile who lives off a dopamine rush at this festival. There are so many ways to feed my film addiction beyond just squeezing four films into my Rubik’s cube of a schedule. We all rush out before our coffee fix to read the TBA’s of the day to find out what last minute movies have been added to the schedule (Argo was added at the last minute last year and went on to win the Best Picture Oscar). At Sundance, you keep your ear to the ground to find out about great private parties. At Telluride, you talk to your neighbor in the queue about the buzz from one film or another and how that’s messed up your day’s film schedule as you “have to” see that film that everyone is talking about. There’s no place in the world where you’re so likely to so freely talk to your neighbor in line.

3. High star-to-paparazzi ratio. No red carpets, no overly ambitious sponsors, no film awards or juries (truthfully, no audience awards, which is rare for a film festival), no industry parties with velvet rope, and virtually no press. The organizers of this festival have been very thoughtful about maintaining TFF’s purity. The remoteness of the location and the expensive price of a festival pass create an editing function. This is a rarefied crowd in a rarefied location, with lots of altitude and no attitude. Over the course of less than three days, I sat next to or ran into a half-dozen Oscar-winning actors and actresses, but no autographs, no fawning photos. In 2011, I even pinched George Clooney’s rear end thinking he was a friend of mine. I didn’t get slapped by a bodyguard…just got a friendly smile from George. 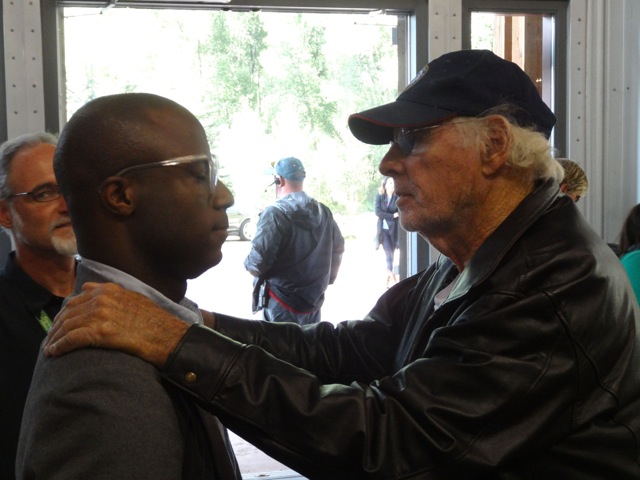 4. Savvy programming. In four of the past five years, Telluride has introduced the first North American screening of what would become the Best Picture winner at next year’s Academy Awards (Slumdog Millionaire, The King’s Speech, The Artist, and Argo). Both the Venice and Toronto film festivals that happen almost simultaneously with Telluride are starting to get nervous that Telluride is stealing their film premieres and bragging rights. Additionally, you could call TFF “Docs without Borders” as the international documentaries that show up here are the best in the world.

5. Exquisite curation. Erudite symposiums in the County Courthouse as well as free-flowing film panels in a city park. Restored classics. Tributes every morning. A “Filmmakers of Tomorrow” program. Book signings throughout the day. You’ll wish you could clone yourself to try and experience all that TFF offers. 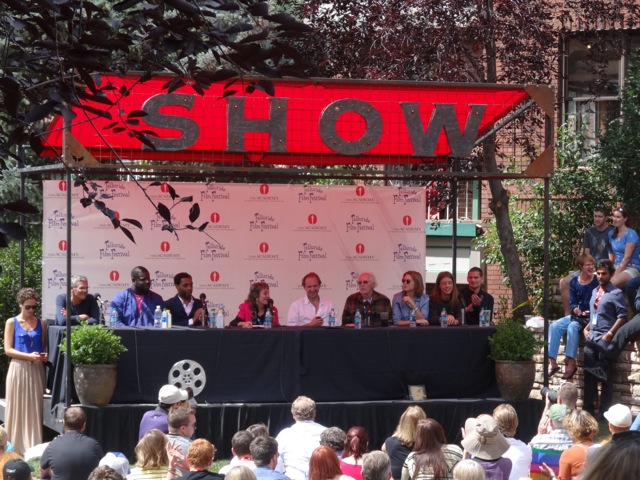 Great film panels in the park with people like Ralph Fiennes, Bruce Dern, and filmmaker Steve McQueen on this particular panel

6. The locals love us. This scruffy, shabby chic former mining town could hate that we pretty much take over the place, as there’s a reason these people have decided to live so removed from the world. But, the locals truly catch the TFF fever and appreciate being able to go see free nightly screenings or film panels in the park. You have to admire the resourcefulness of converting hockey rinks and high school auditoriums into film venues for this high-brow audience. 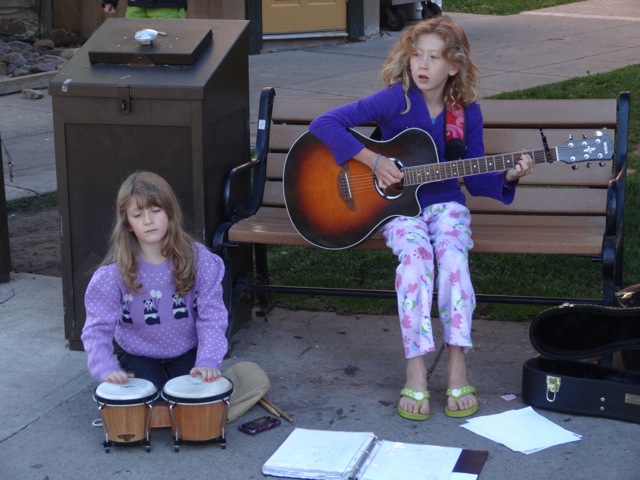 Some of the younger locals looking to be “discovered”

7. The regulars love TFF. It takes a real commitment to get there. I drove in from Moab, Utah two years ago (after mountain biking there) and Keystone, Colorado this year (after giving a speech). You can fly into Telluride on a charter, but most fly into Montrose which is more than an hours drive away. It isn’t easy being a TFF regular. But, there’s blind faith that the programming will be amazing as the films aren’t even announced till the week of the festival. On this 40th anniversary, I met people who’d been to TFF every single year and I have a handful of friends who are close to their 20th consecutive year. I doubt if there’s any film festival in the world that has such a large percentage of its attendees who put the event in their will or estate plan. Truthfully, many TFF lovers are more loyal to this annual mecca than they are to their alma mater. 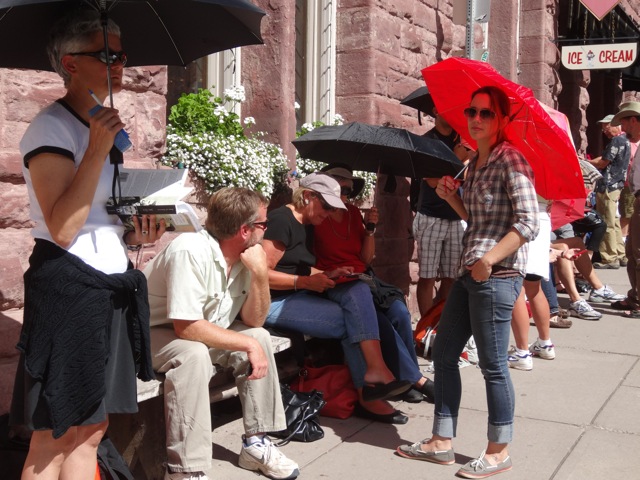 You meet new friends in the queue and an umbrella has dual benefits as, within an hour, a rainstorm can surprise followed by intense sunshine due to the altitude

8. Perfect for a family reunion or gathering of friends. What a great way to reconnect with friends or family, while also being independent at the same time. There are ten different venues, from 50 to 650 seats, and every one of them is walkable (or accessible by gondola). I’ve loved, loved, loved doing dinner with friends at the end of a long day gushing and arguing about our favorite films of the day.

9. Gotta love a Labor Day picnic. There’s a little slice of Americana in this festival. Free concerts in the town park. An Opening Night Feed on the main drag, Colorado Avenue. This small town knows how to throw a big party. 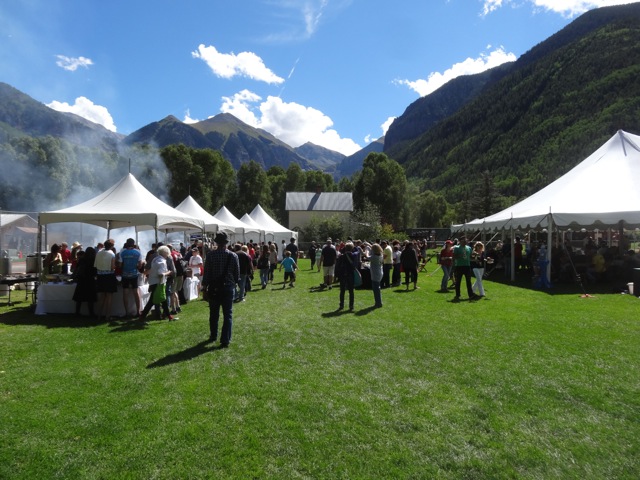 10. The “I’s” have it: Immersion, Intimacy, and Inclusiveness on an Island. Telluride is the “Festival Capital of the Southwest,” and for good reason. It’s not just that the town attracts great festivals like the Blues and Brews Festival or the WOW Festival (Work Out Weekend), the remote, island-like nature of the place creates a sense of intimacy and immersion. But, beware, islands can also bring forth magnified emotions. You will likely cry or giggle like a child during your Labor Day weekend. And, the fact that you’re letting down your boundaries with friends or strangers creates a sense of catharsis that you never imagined you’d experience at a film festival. Some call it “Telluride Therapy.” 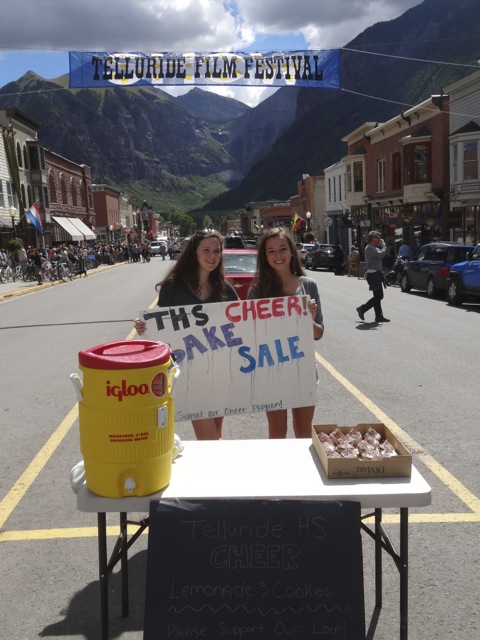 I’ve been to three of the five festivals considered the global best (Cannes, Toronto and Sundance…haven’t done Berlin or Venice yet) and it’s a rush to see a world premiere in these venues. But, there’s a little love missing. These festivals, as well run as they are, represent transactional marketplaces. I’ve been to all kinds of other second- and third-tier festivals from Tribeca to Mill Valley to SXSW to Frameline to San Francisco. You’ll feel the love there, but you’re often missing the best films or the kind of post-screening, juicy conversations that populate the Telluride experience.

My chief gripe with the Telluride Film Festival? Every year, I have to make the decision: should I go to Telluride or should I go to Burning Man? Fortunately, this year I was able to do both in the same week. Nearly two weeks later, I’m still smiling ear-to-ear.