When the Austin City Limits Festival debuted as a two-day event in 2002, not even its founders foresaw how rapidly it would grow from baby to big. By 2003, it spanned three days; in 2013, it added a second weekend. It also spawned the revival of Perry Farrell’s Lollapalooza fest, now held in six countries. And ACL Fest founders C3 Presents (and partner Live Nation Entertainment) just announced plans for the first Auckland City Limits Festival in New Zealand.

But just like the 41-year-old PBS TV show that gave ACL its name — and like the city itself — the festival has evolved dramatically. Early lineups offered a smorgasbord of roots acts, a good percentage from Austin and environs, with big-name heritage acts closing it out. R.E.M., Tom Petty & the Heartbreakers, Bob Dylan, Neil Young, Stevie Wonder … even the Red Hot Chili Peppers and Pearl Jam fell into that category. Chicago-based Lollapalooza was more urbane — and urban — with rappers, EDM acts and Top 40 stars one would never expect to see at ACL Fest. Acts like Lady Gaga or deadmau5 — the mouse-masked EDM wizard who played opposite Drake on both Saturdays this year.

Still, ACL Fest has its own character, from whimsical art installations to food — and of course, music. Here are some favorite aspects from Weekend Two of ACL 2015.

Watching homeboys Gary Clark, Jr. and Shakey Graves (aka Alejandro Rose-Garcia) draw incredibly huge crowds — and perform killer sets — will never get old. Both started out on the festival’s tiniest — and coolest —stage, sponsored by BMI. Austinites who’ve witnessed their evolution into marquee acts beamed like proud parents as they performed on Friday and Saturday, respectively.

Clark’s appearance with the Foo Fighters was a bonus. And anyone who knows anything about Austin’s music history instantly recognized the significance of his Antone’s t-shirt. Not only was the late Clifford Antone his musical mentor, Clark is involved in resuscitating the long-dormant club that had as much to do with putting Austin on the musical map as the “Austin City Limits” TV series did. Speaking of the Foos, local resident Ben Kweller also joined Dave Grohl and company for sweet rendition of “Big Me,” from the band’s first album. “It’s all for Austin!” Kweller shouted. Grohl announced the Foo Fighters had spent the week between gigs recording in Austin, a city they seem to adore, and Kweller will be heard singing harmony on one of the tracks.

The festival’s smallest stage is also the best hang. A nearby tree provides some shade from Austin’s heat, which hits the 90s even in October, and the artists who play the stage are often on the verge of breaking big. You can still get close enough to see their eyes — and feel their excitement. The lineup included DeRobert & the Half Truths, Spirit Family Reunion, Steelism, Sounds Del Mar, Sugar & the Hi-Lows, Alessia Cara and American Aquarium — names you might not know yet, but you will. Locals also gravitate toward the tent sponsored this year by proudly homegrown Tito’s Vodka, where acts like Rhiannon Giddens and Kali Uchis also earn their way toward bigger stages in future years.

A large picture frame that allowed festival-goers to pose with ACL Fest stages and Austin’s skyline as a backdrop drew huge lines. But the most inspired art installation was a tree festooned with ribbons and three piñatas that spelled “art.” Another section of the park had a planting of about 30 metal flagpoles, each maybe 35 feet tall and topped with flags in shades of blue, green, purple, pink and red. Of course, human art also was on display; more festival-goers seem inclined to wear attention-grabbing costumes, from superheroes to Seussian “Thing 1” and “Thing 2” outfits.

Photo by: Roger Ho for ACL

Onstage light shows get more inspired every year (Grohl’s throne rocked, of course, but so did Tame Impala’s screenage, and that’s not even counting the EDM acts). But sights like a baby stroller decked out with white string lights — a fun, yet practical solution to navigating through the dark — brought smiles. Every bicycle rider should take a cue from those baby-wheeling parents; visibility is good!

ACL takes pride in keeping it local, and the food court was loaded with some of the city’s finest offerings. Peached Tortilla, Salt Lick Barbecue, Amy’s Ice Creams, Torchy’s Tacos, Tiff’s Treats, East Side King … the list was long and yummy. Thankfully, the lines weren’t. 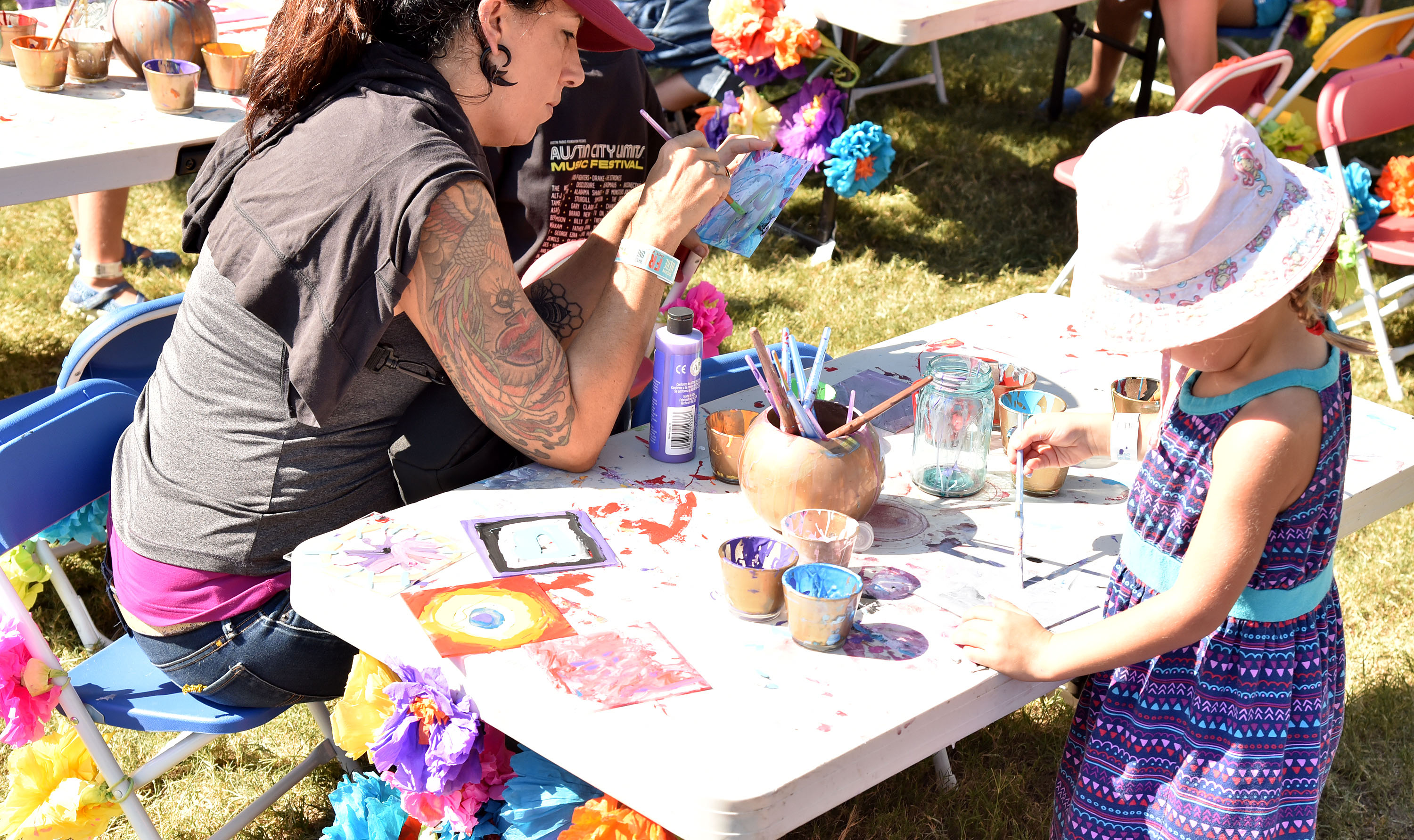 Yep, it’s local here, too. Hats, handmade clothes and jewelry, pick-your-own silkscreens and this year, even guitars, were available.

Samsung had a huge “Galaxy Experience” setup with hammocks, charging stations, on-demand silk-screening and other attractions; AT&T also had the “Gigapower Gallery,” but the any-brand-friendly solar-powered charging station drew a big crowd of power-needy phone users. And back in the media area’s radio section, where artists showed up throughout the weekend for interviews, a pottery wheel was on hand for anyone who wanted to play with clay. Talk about creative.