Did You Know You Can Get Married at a Festival?

With the amount of people who attend festivals every year in the U.S., it's not surprising that those who are head over heels in love would consider commemorating their most special day in their favorite environment.

And it's not as uncommon as you'd think. The #FestivalWedding has thousands of photos on Instagram. Festival-themed weddings are also wildly popular among wedding blogs like Offbeat Bride. Each festival has its own level of involvement in your pending nuptials, ranging from offering full-blown wedding packages and special edition rings to simply granting permission. They can be with just close friends in tow, or full-blown ragers.

Getting married at a festival is certainly outside of the box, but that doesn't mean you can get married on a crazy whim. To make your marriage legal, you must obtain a marriage license from the state before you arrive at the festival.

We spoke to some beautiful couples to hear about their magical festival weddings first hand. 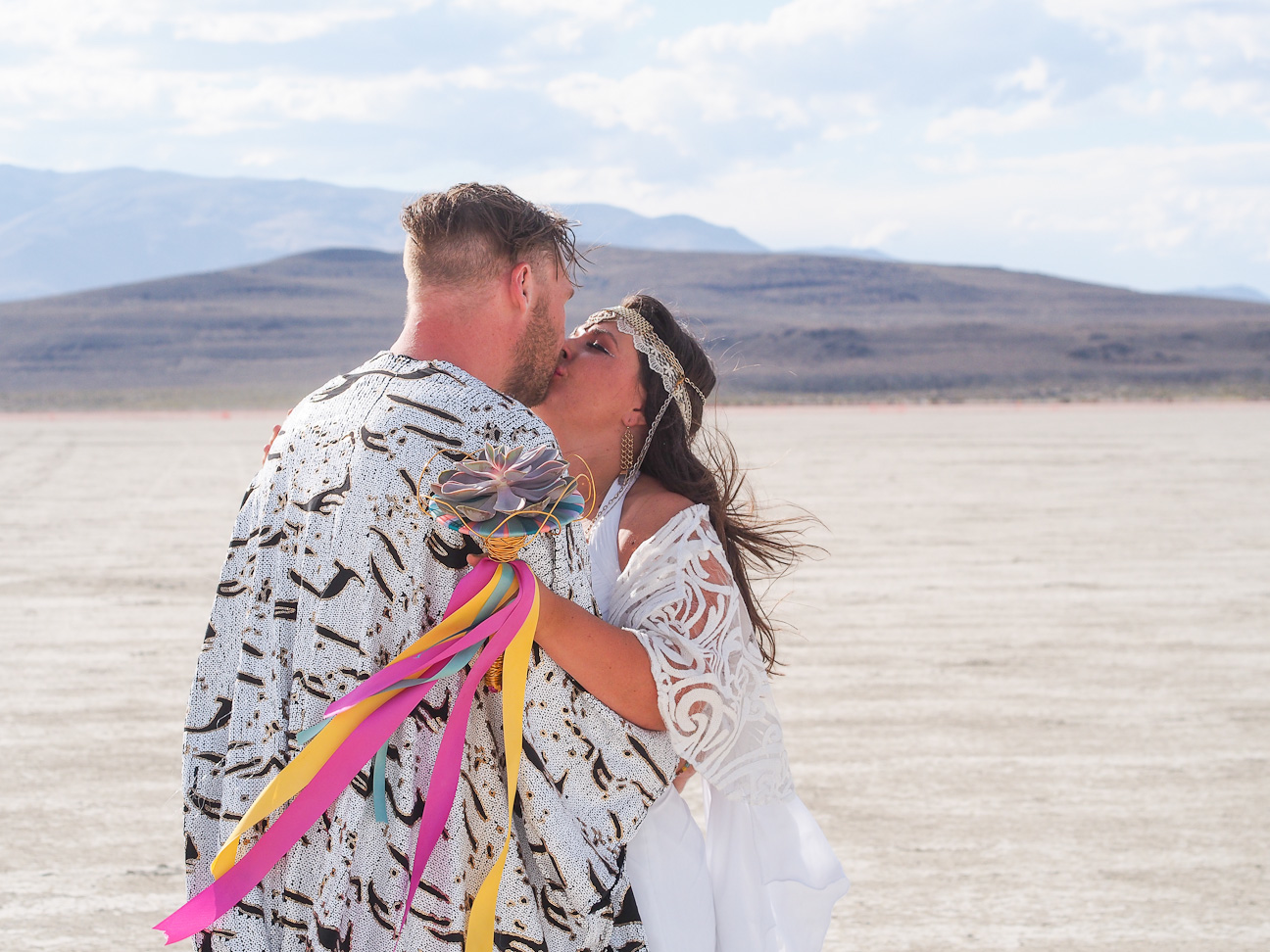 Perhaps the most popular festival to get married at, Burning Man is an obvious choice for many in-love festival-goers. In 2013 the festival saw over 30 registered weddings, and that number has only increased. Those numbers don’t even include the people who have unofficial weddings on the playa.

Burning Man gives detailed instructions and offers assistance for those looking to get married on the playa. Nevada has particularly specific guidelines for marriage so it is essential to plan your wedding at least a month before arriving on playa.

For Brittany, founder of Culture Vulture and Worthy, the acclaimed Dirtybird DJ, getting married at Burning Man was in their relationship’s blood. After knowing each other for nearly a decade, the couple shared a brief but magical moment on the playa in 2009, after a dust storm settled to reveal a beautiful sunset. Both were with other people at the time but their connection was magnetic.

Years later, Brittany set out one night to meet the man of her dreams and found herself face to face with Worthy at Monarch. They have been together ever since.

“Last year, after facing a lot of the changes people do when they have a child, we decided to go to Burning Man together. It was a rough entry but we found our way back to openness and rediscovering our deeper love. After Worthy’s set at Disco Knights (the camp that Green Gorilla evolved into), Worthy proposed to me at sunrise as dozens of rainbow parachutes fell from the sky. It was epic! We then held each other as we watched the Embrace burn.

“So it seemed only fitting when discussing where we would get married that we would return to Burning Man, the place where sparks literally and figuratively flew. We got married at the Temple near the same spot he proposed. We had our reception at Disco Knights, the camp that we had first locked eyes in. And everything was magical and amazing, just like that first moment when we energetically connected seven years ago,” said Brittany.

“Everything comes full circle. You just have to set your intentions, believe in yourself, and walk your path with open eyes and heart, said Brittany.”

If getting married during one of your favorite band’s sets sounds like a dream come true, tying the knot at Bonnaroo is for you. Although the only official mention of a wedding on their website is a vague notion of being able to rent out or reserve a POD in the campground, both Vice and MTV reported weddings occurring at the fest this year. 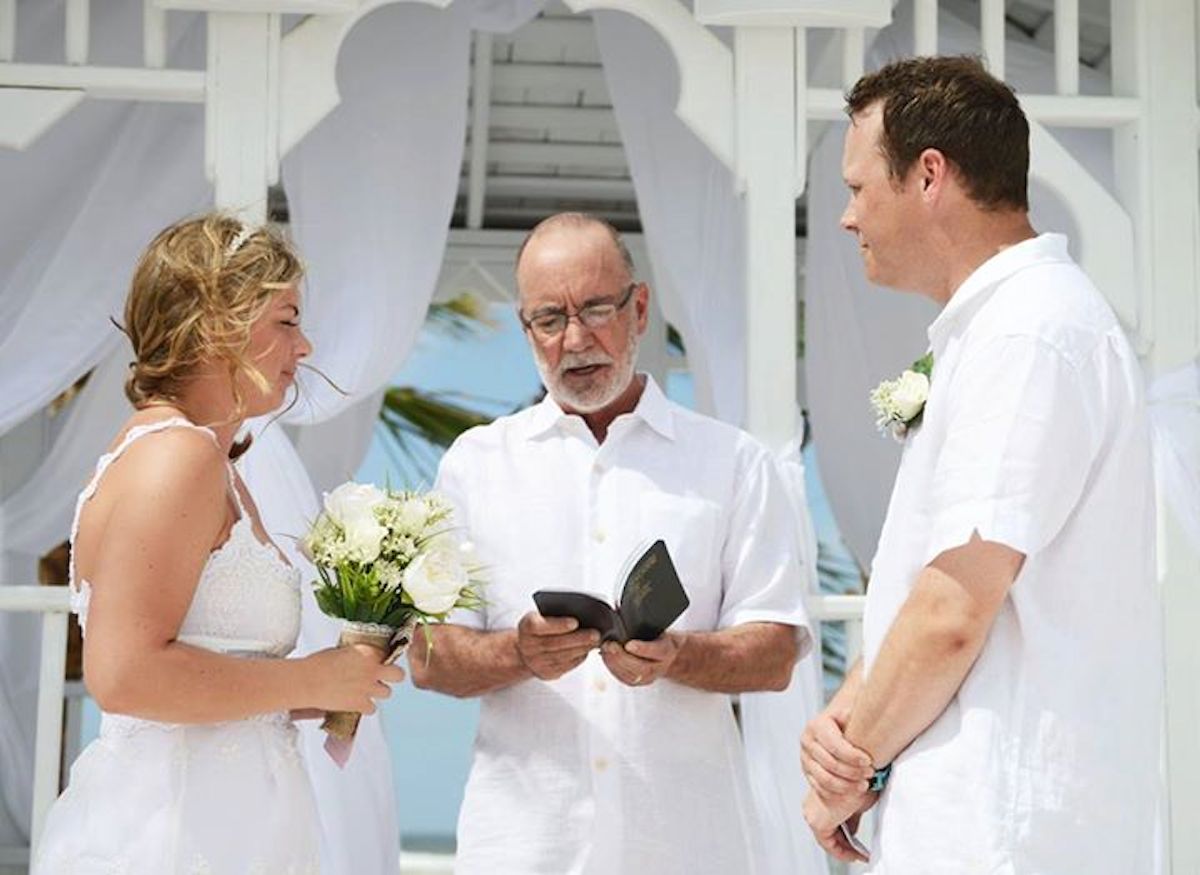 Hangout Music Festival has grown leaps and bounds since its start in 2010. From selling 12,000 tickets to over 40,000 this year, the festival pulls big-name headliners such as Skrillex and The Foo Fighters. It is one of the few festivals in the south with artists of that caliber.

Should you choose to get married at this beachside fest, they will supply the wedding chapel and the ordained minister for you. But make sure to read their instructions so you can make it legal. 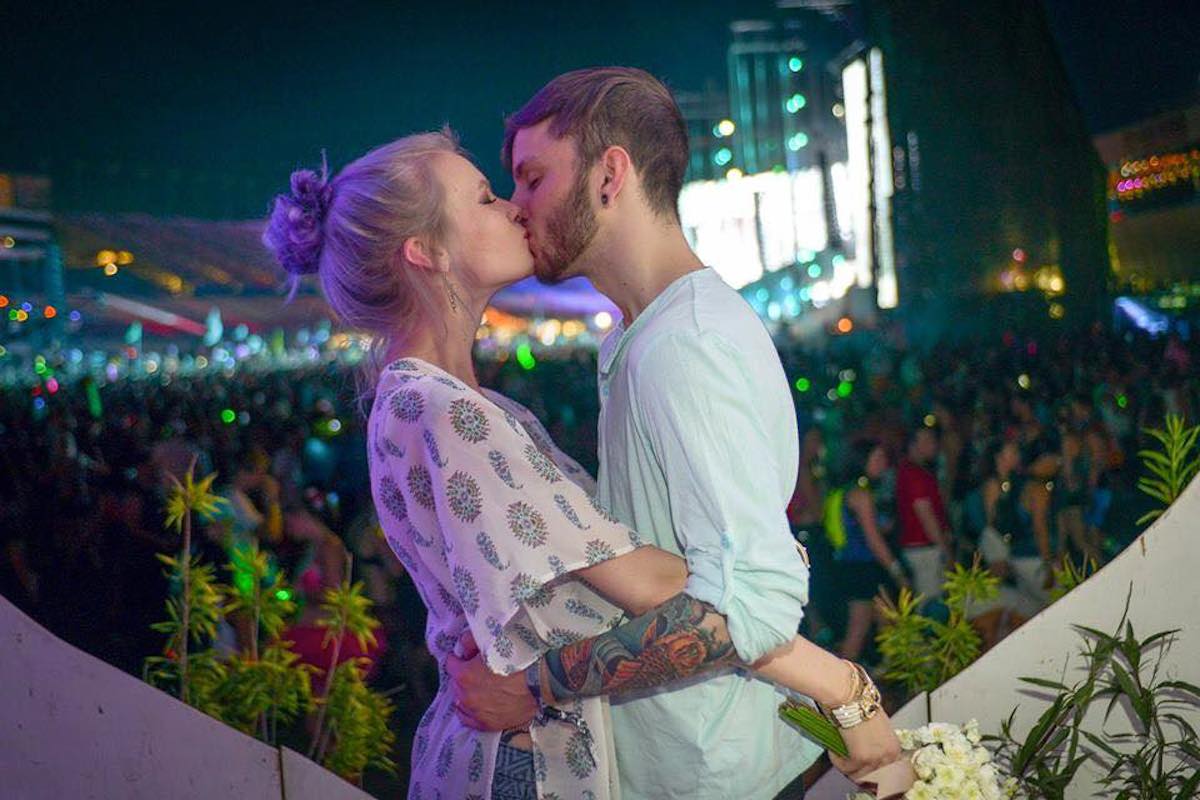 Insomniac’s largest rave, EDC, has offered marriage packages since 2013. They have a wedding chapel on-site and offer detailed instructions on how to make your wedding legal in Nevada. They even have an Elvis package to keep that Viva Las Vegas spirit alive.

DJ Aaron Jackson and his wife Savannah tied the knot at EDC and had an incredible experience. 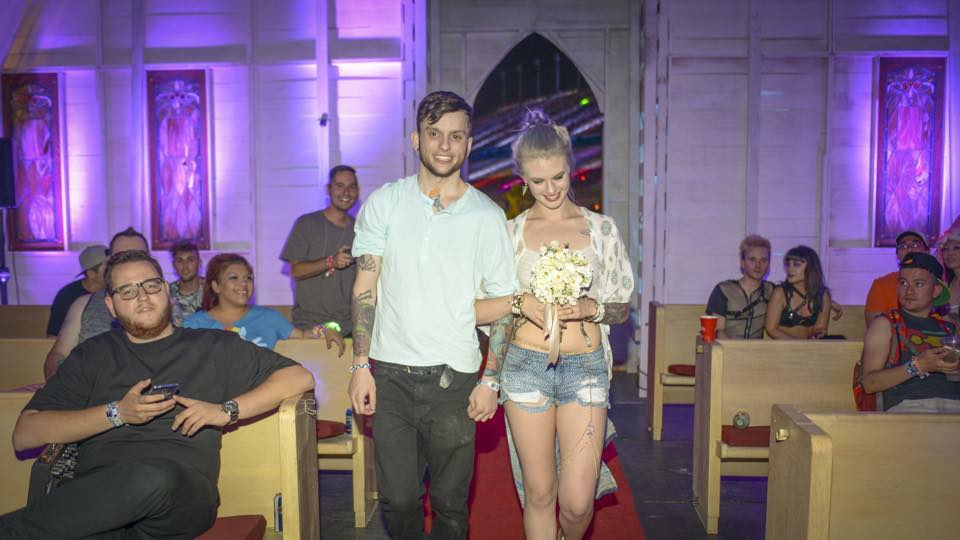 “The best part about getting married at the festival was the overwhelming feeling of love and happiness. We had some close friends with us as well so that made it even more special,” said Savannah.

Lightning In a Bottle, Bradley, California 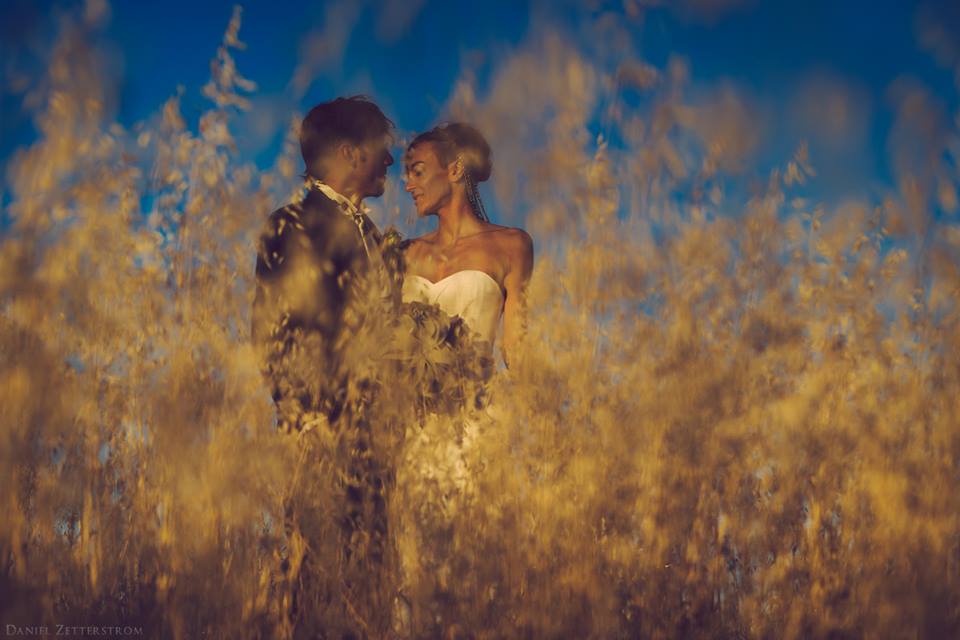 There were at least two weddings at Lightning In a Bottle in 2016. One of the weddings saw one of the founders of The Do Lab, Josh Flemming, marry his love, while the other was a couple who got married at The Grand Artique. Anyone who was at the stage during that time got to be a part of the wedding, which made it even more special.

I spoke to one of the founders of The Do Lab, Dede Flemming, about the magic of LIB and the possibility of more weddings at the fest. 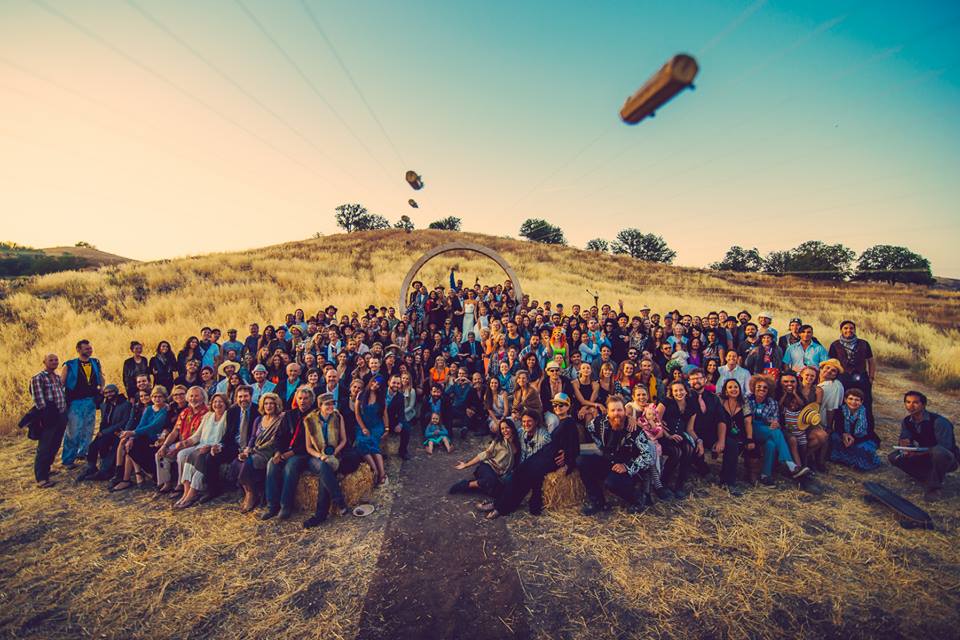 “I would imagine wanting to go back to the special place that you met and sealing a life-long commitment in that very place is an appealing thing for a lot of people. Being surrounded by close friends and amazing positive energy is a great way to start a new life together with someone,” said Flemming.

If you are looking for an unconventional wedding backdrop but the relentless beats of a music festival don’t sound appealing, you can get married floating high in the sky, surrounded by over 700 beautifully decorated hot air balloons. Sound dreamy? It is.

The Albuquerque Balloon Festival offers fully comprehensive wedding packages with options for catering, photography, dance floor, invitations and pretty much anything else you can think of. 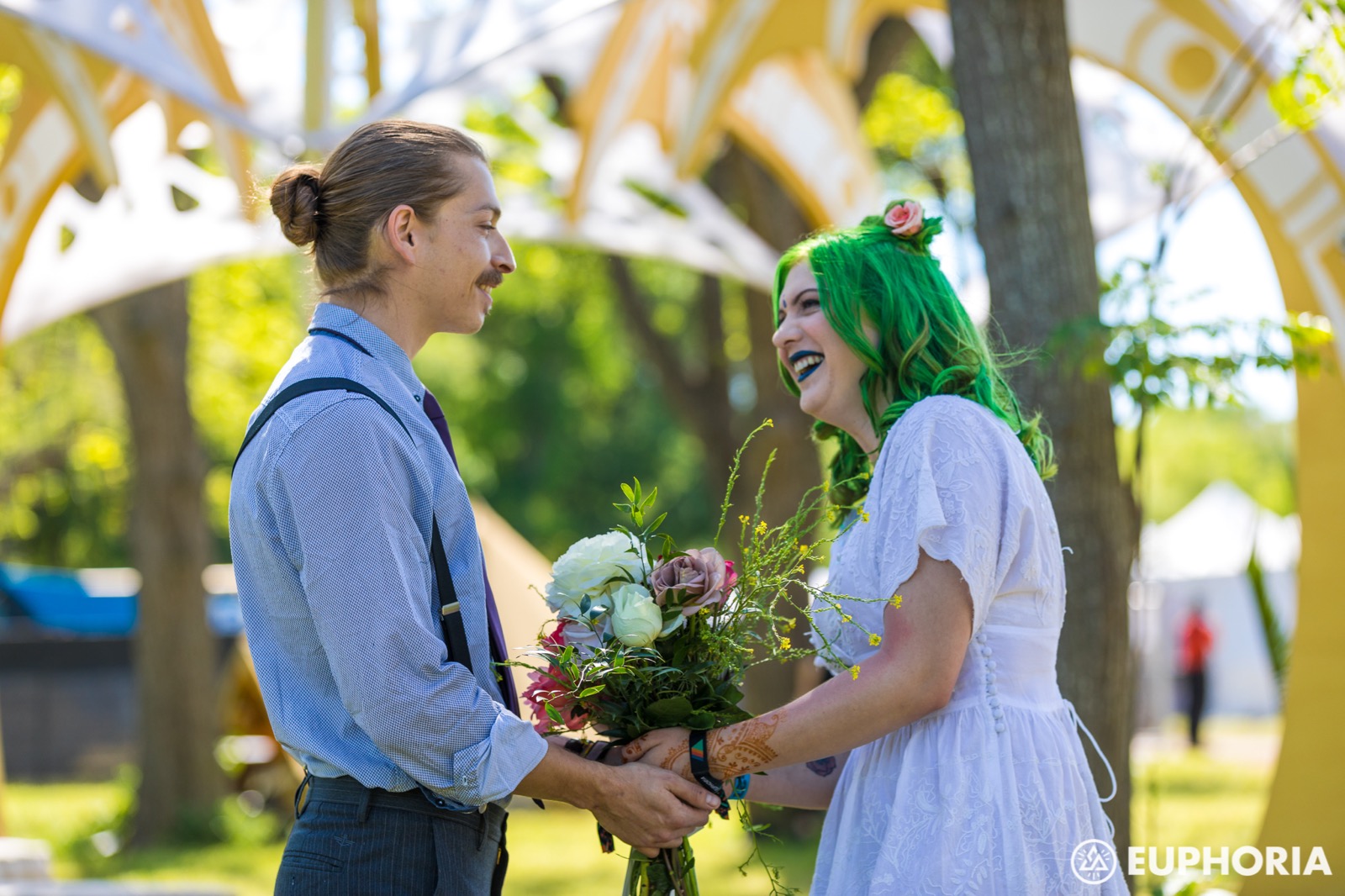 Euphoria Music Festival debuted its wedding offerings in 2017 with the hopes of giving engaged couples a unique ceremonial setting they will never forget. "We believe wholeheartedly in the power of music and community to evoke emotions and forge connections that reach far beyond the festival itself," reads the festival's Weddings page.

Couples getting hitched at Euphoria get to use separate, private areas for preparation, enjoy spacious seating for guests, a coordinator dedicated to making sure things run smoothly, and more. The festival has teamed up with a slew of local Austin companies to provide excellent accoutrements and amenities – such as locally baked wedding cakes, hair and makeup services, wedding photo packages and much more – for even the most discerning couples. Head to Euphoria's Weddings page to start planning your special day.