After more than two decades in the business, Pasquale Rotella has built himself a festival empire that's brought high-octane rave culture into the mainstream. From helping Destructo’s once underground rave, Electric Daisy Carnival , become the Las Vegas behemoth it is today, to making public statements about Kandi accessories symbolizing free expression and friendship, Pasquale isn’t one to shy away from public attention. In fact, he revels in it. At nearly all Insomniac events he makes an appearance, and it’s not just for show; he brings along his wife, Holly Madison, a onetime Playboy Playmate and now a New York Times best-selling author of Down the Rabbit Hole: Curious and Cautionary Tales of a Former Playboy Bunny and wide-eyed daughter, Rainbow Aurora Rotella, to enjoy the festivities, as well. Rainbow, only a toddler, is particularly fascinating because she's garnered a following that already rivals that of many festival celebrities. Particularly at Insomniac events, Rainbow’s celebrity stature is without question – it's totem-worthy, even.

To understand the admiration Rainbow elicits it helps to understand that when she came along, rave and festival culture were beginning their ascent into the mainstream. As ambassadors of this brand of emerging culture, Pasquale and Holly (who already had her own mainstream appeal thanks to her relationship with Hugh Hefner) were a power couple with a rare mixture of cojones and clout. But raves of the day were underground parties meant more for rebellious, freethinking teenagers than for families with a toddler in tow. As Insomniac’s events exploded in popularity and rave culture became more widely accepted, dance music was embraced further by festivals, according to Pasquale. Today, two decades since Insomniac's humble beginnings, the median age of its audience is quite diverse; many who were first on the scene are now in their thirties and forties.

Many couples find love or even get married under the Electric Daisy Carnival's proverbial electric skies every year, so when Rainbow arrived to the Insomniac family, for many, she represented the weight of adult responsibility, or the natural extension of a storybook romance. By his own account Pasquale attributes his vision to moments of brilliance in time spent with his daughter. In an interview Pasquale said, “When Rainbow sees something, her eyes are wide open, and she’s having so much fun with the smallest things. I feel like the dance community puts their guard down and allows themselves to find their inner child. Rainbow inspires me a whole lot, and Holly could not be anymore supportive.”

We All Start Out As a Rainbow 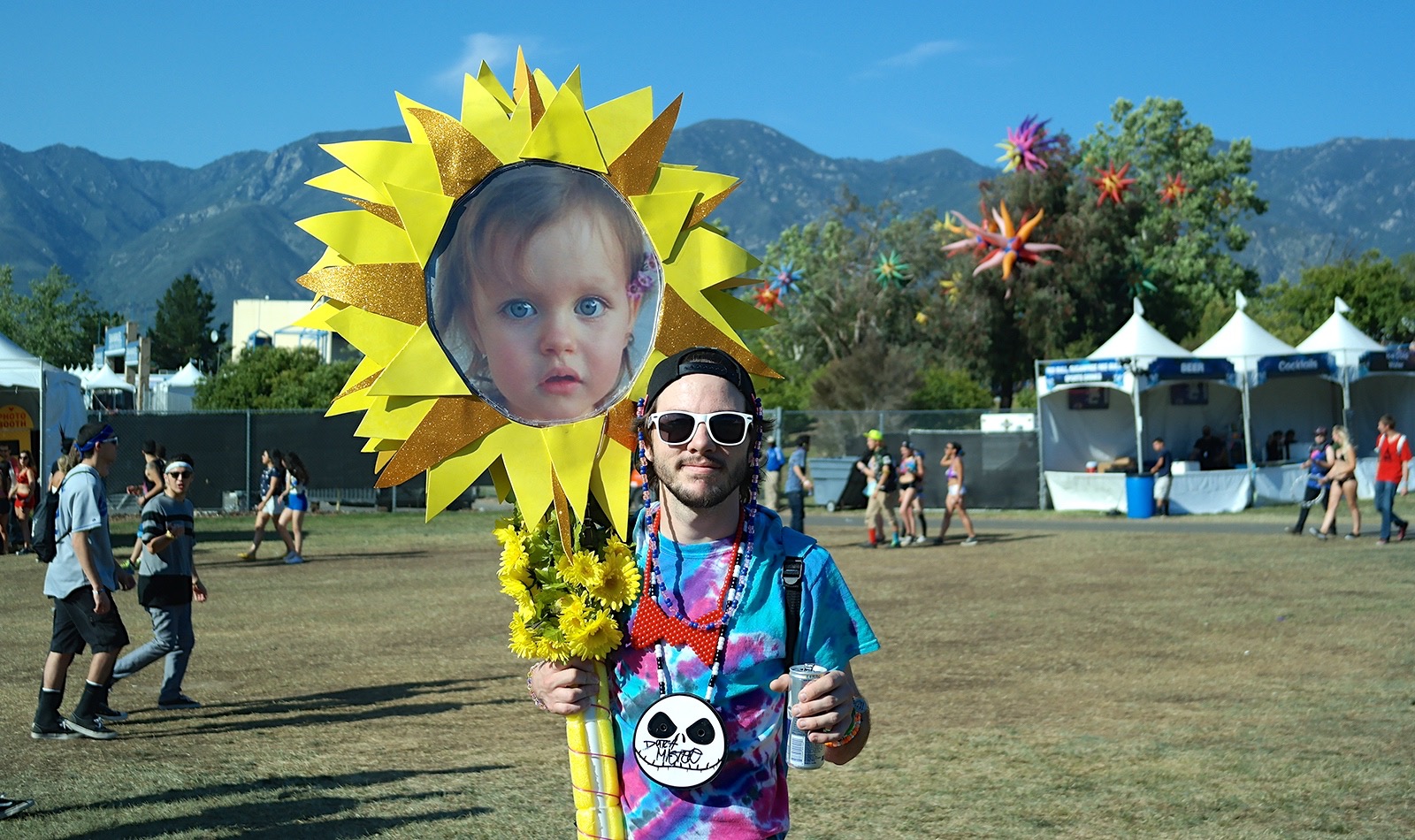 A Rainbow Rotella totem at Beyond Wonderland 2015. Photo by: Chris Hong

Once raves were brought from the underground and into the daylight, they flourished, became widely accepted as something both primal and new, and are on the road to becoming safer environments for all kinds of partiers. As the first child of the Insomniac empire Rainbow will be immersed in rave culture for most of her early life, and as an icon of the community she will continue to remind us that a sense of wonder will be constant, festival environments will become richer, and that safety is a serious matter. More importantly, it dispels the idea that festivals are only appropriate for one select age group. The world of parenting and events had some surprising synergies too, according to Pasquale.

When the Las Vegas Sun asked him about whether having a family had slowed him down, he pointed out that the opposite had occurred. “It’s given me more inspiration,” he said. “Our daughter Rainbow inspires me every day. Dance music is about being in the moment and dancing and having a good time and being positive. There is not any inspiration better in the world than our daughter for that.“ Like festivals and the underground party scene, Rainbow reminds us that, just like the industry, she will grow to become what we raise her to be. In other words, we all start out as a Rainbow, a Tabula rasa full of potential.

Forever in the Spotlight

One inescapable reality of this day and age is that young people get to enjoy the digital panopticon that records their every whim, immortalizing it across cyberspace. For better or worse, this technology allows Rainbow to do TV appearances with her mother, to instigate her own costume contest for one of Insomniac’s events, Escape: All Hallows' Eve, and to have fan blogs dedicated to her. She's even appeared in a trailer for Insomniac's Electric Daisy Carnival in Puerto Rico. That's a pretty impressive internet presence for a two-and-a-half year old.

It’s probably a lot to hope that Rainbow will grow to be some kind of Kandi messiah, but it's comforting that others outside the community will get a chance to see the heartfelt side of rave culture, beyond the security issues and reckless partying for which it sometimes catches flak. And there’s probably not a better representation of the heart and soul of rave culture than Rainbow (who is now a big sister to her new baby brother, born in August 2016) and her tight-knit family.