Burning Man attendees always say they want to take their playa enlightenment back to the Default World. Burning Man Arts makes sure that happens, so it hands out more than $100,000 in grants to ambitious public art projects that are specifically not going to Burning Man. Instead, these interactive civic art installations go up in various cities and at festivals all over the Default World. So who are these daring artists who receive Burning Man grant money, and what elaborate artistic schemes will they bring to which parts of the world?

Fest300 caught up with a few of these artists to get some sneak previews of the fantastic installations they’re building. The full list of 2015 Burning Man Arts Global Arts Grant recipients is online, but a few of these projects really stand out for their ingeniousness and inspiration of awe.

New Orleans is known for its live music venues, but the Music Box Roving Village is a live music venue that actually creates music. A temporary village made up of five insane little treehouse dwellings, this “musical architecture” project has equipped each treehouse with bells, horns, trombones and other playable musical contraptions. Passersby at City Park in New Orleans are allowed to walk right in and play the houses’ instruments, though the Village is also the site of a series of outdoor concerts over the summer featuring popular local musicians.

This tiny musical town is the brainchild of New Orleans Airlift , an artists’ collective formed in response to the destruction of Hurricane Katrina. Several different artists created each of the tiny, funky houses and they’re all connected by a zigzagging wooden walkway. New Orleans Airlift program director Tori Bush told Fest300, “This musical architecture project is dedicated to creating immersive, spectacular artworks that inspire wonder and engage audiences.”

The Music Box Roving Village has concerts and events scheduled throughout the summer of 2015 and will pop up at other “unexpected sites” in New Orleans throughout the year. 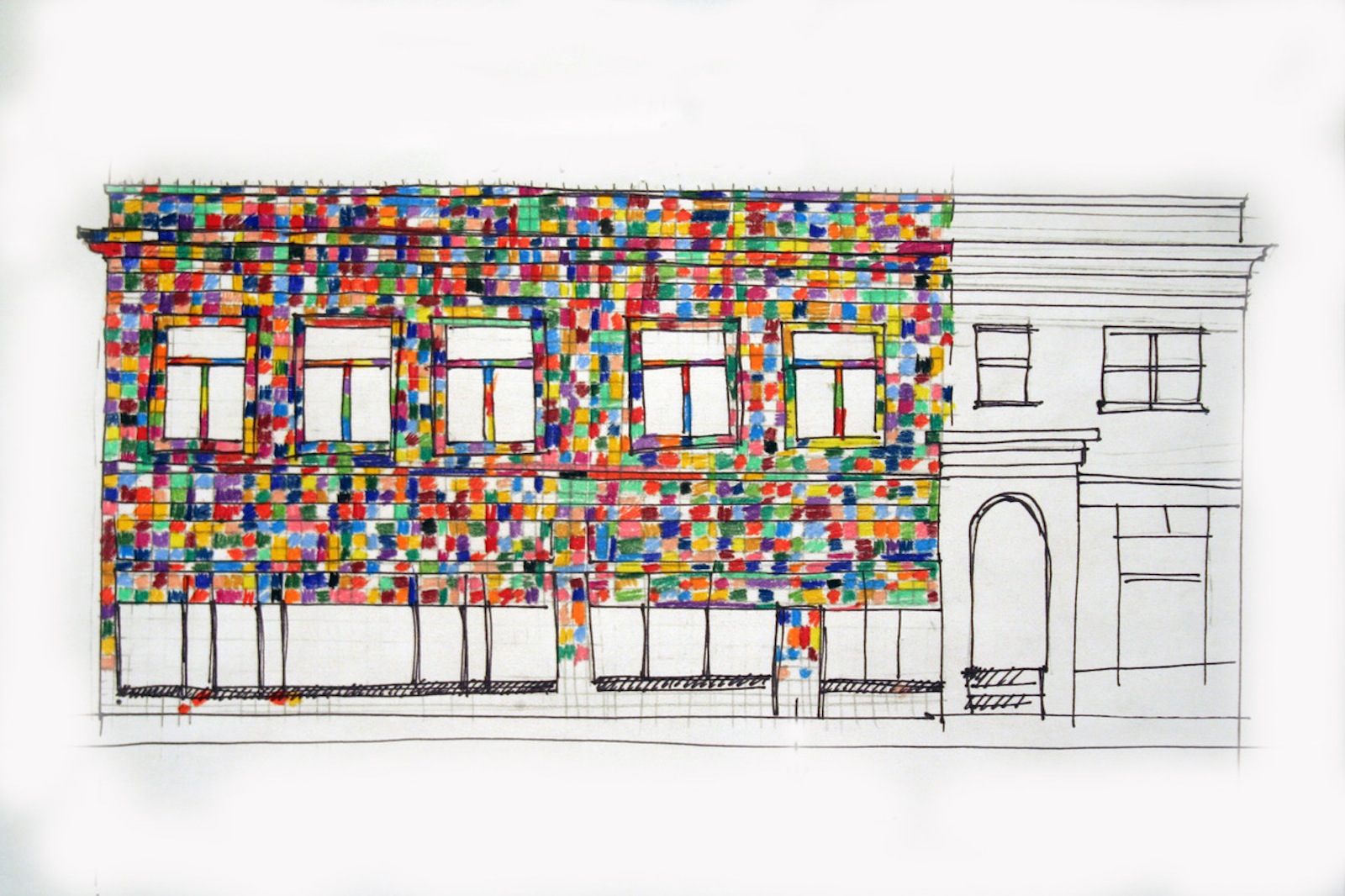 Image courtesy of Design on Main

An entire building will get yarn-bombed next summer in Ames, Iowa. What is currently a normal-looking, 130-year-old, two-story building on Main Street in Ames will become the most yarn-bombed structure known to humankind when the Design on Main crew fully yarn-bombs the front facade of the building. Artist Jennifer Drinkwater will lead the project, though knitting circles across Iowa are already working on their contributions to cover the building.

Intertwine will be installed to the front of the building on Main Street in May 2016 and will remain on display for the duration of next summer. 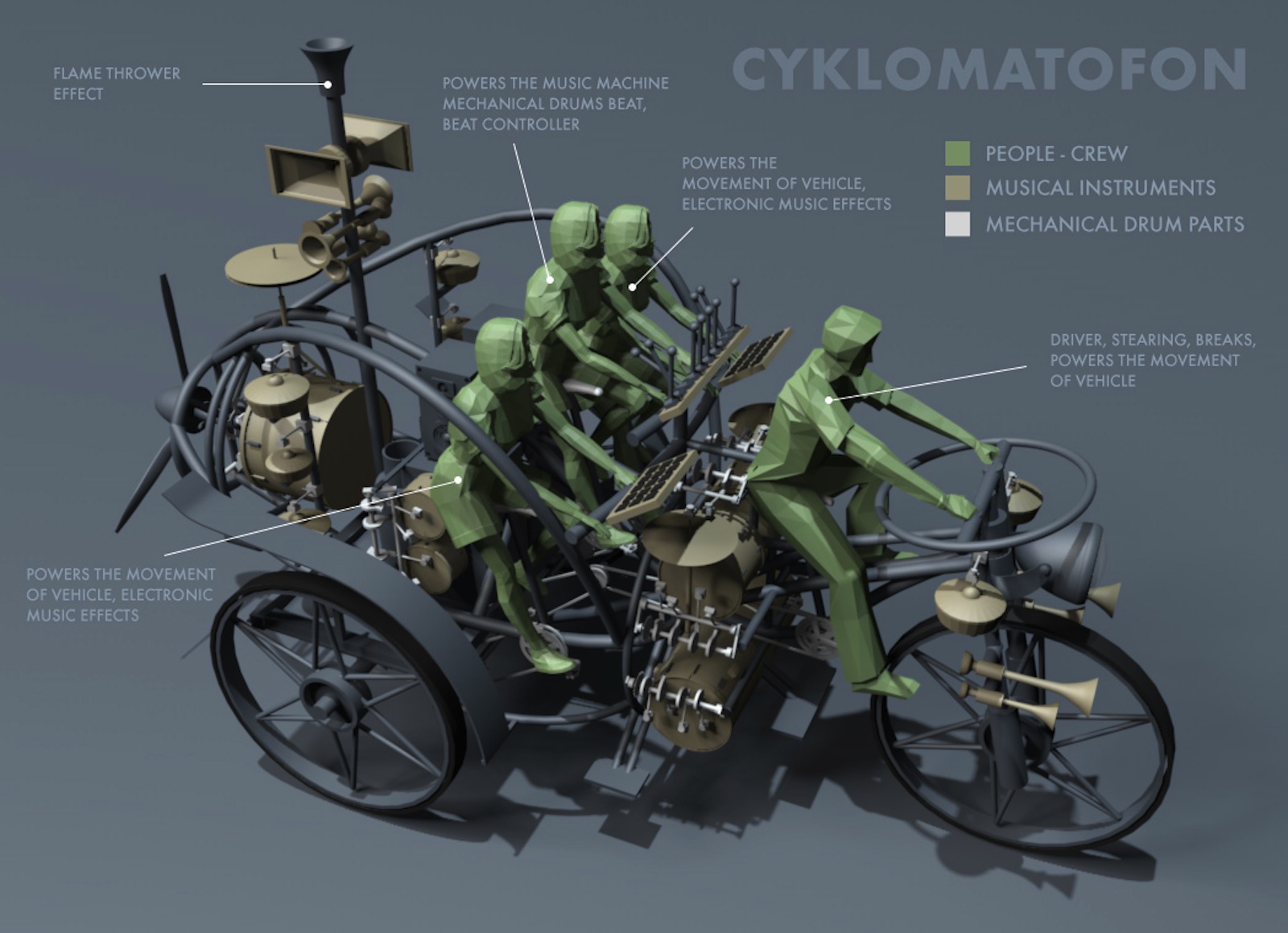 You see four riders on the bicycle contraption above, but not all four pedalers are powering the bicycle forward. Some of their pedaling is powering the musical instruments set up on Bamboo Element’s Cyklomatofon, a “mobile, mixed analog-digital musical instrument” coming to the streets of Prague. The three back riders have dashboards equipped with mixing boards and beat controllers, adding electronica to the musical mix

The Cyklomatofon will also be equipped with strobe lights, smoke machines and — since this is Burning Man art — flamethrowers. It’s a sort of a “sequel on wheels” to the popular Black Rock Arts Foundation’s previous grant winner Bambufonomat you may have seen at Burning Man 2013.

This year’s Bay Area Book Festival (Berkeley, CA, June 6-7) has a special footnote that everyone will want to browse through. It’s called Lacuna, a nearly 100-foot diameter circular library to be built entirely out of books. “The Book Festival brings 300 writers from around the world to downtown Berkeley, California for a weekend of keynotes, interviews, panels and performances, all around books,” the festival’s executive director Cherilyn Parsons says. “One of the features of the Festival will be this amazing library/temple/art installation called Lacuna.”

The books that form the temple are donated by from the Internet Archive, which is scanning millions of books for online access. In many cases, IA received duplicates. So the Archive donated these extra books to the Book Festival, who have collaborated with the Flux Foundation to create this library built out of books.

“With Flux we conceived this art installation that is a library of temple made entirely of 50,000 books,” Ms. Parson said. “What’s remarkable about it is that it’s interactive with the public that people will come over the weekend and literally take the books from the walls of the structure.”

“So the structure will change over the weekend as people take the books,” she continued. “There’ll be space in the wall so light will change inside the structure. By the end of the weekend, it’ll be somewhat empty. It’ll be sort a of a shell of a library. But the books will be out in the community which is where they’re meant to be.” 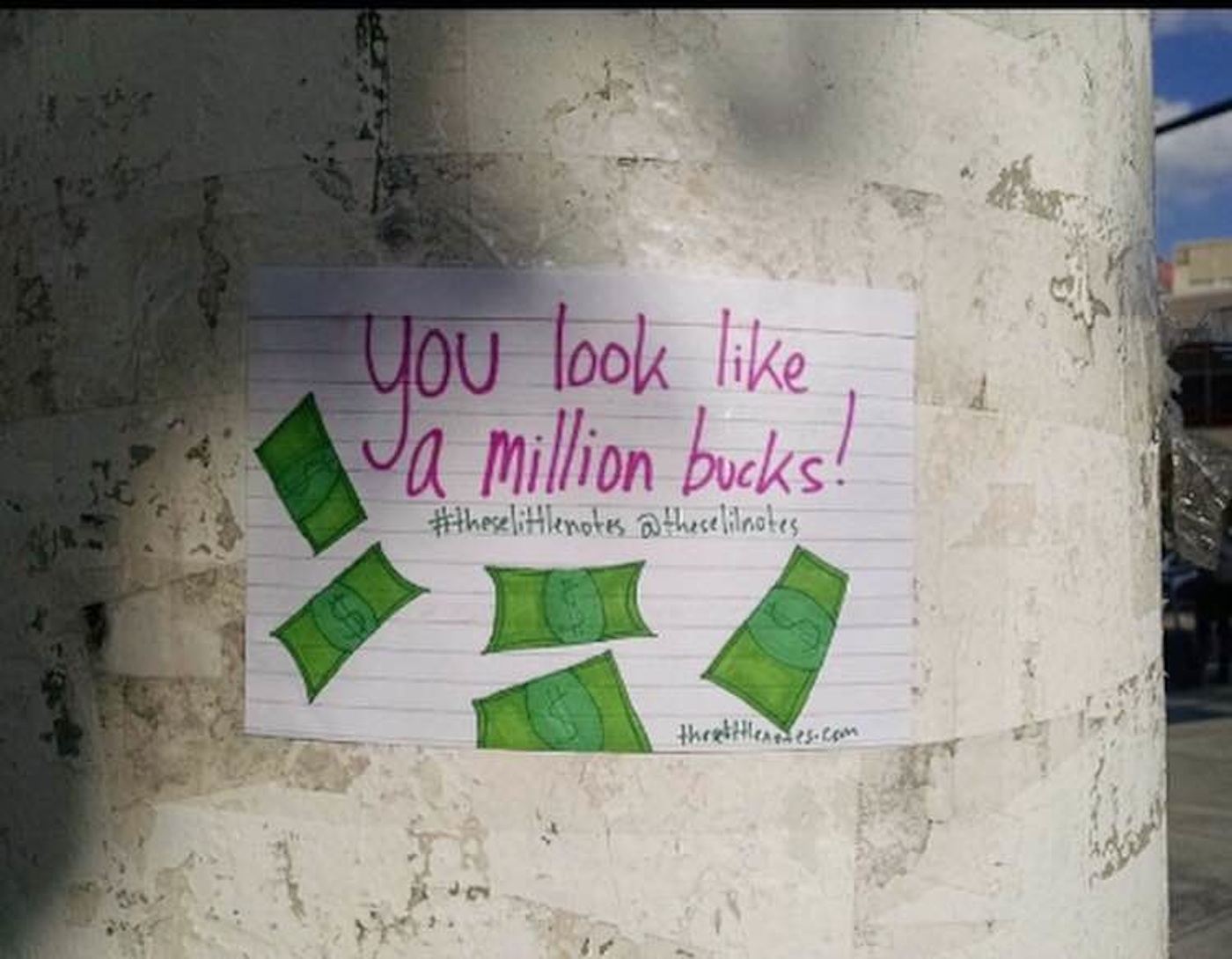 Image courtesy of These Little Notes

You’d better have a hanky ready, because These Little Notes is such a sweet project that it will bring a tear to your eye. Sisters S. Riley and Brittany Ingram crank out countless adorable little notes and care packages for delivery to teens in psychiatric units. The notes are also left posted in random public places to provide whimsical jolts of self-esteem to passersby.

“We're a family-run non profit organization that delivers care packages to teens in psychiatric units and leaves nice notes in public places,” the Ingram sister told Fest300. “The Burning Man grant will fund a community arts program that will allow residents from the neighborhood to drop in and create uplifting notes that we will post in their neighborhoods.”

These Little Notes is not a temporary art installation, but instead an ongoing morale-building exercise that delightfully smothers disenfranchised teens with acts of kindness. Consider making a contribution to These Little Notes on their website donation page.

What Burning Man Arts Global Arts Grant recipients do you love the most?