At Glastonbury, Mud and Diversity Provide an Antidote to Brexit Blues

The UK has had a turbulent 2016, with extreme weather, divisive political campaigns, the first murder of a politician in 40 years, and its recent "Brexit" from the European Union, all of which have created divisions in society and a sombre atmosphere across the nation. If ever proof was needed that festivals provide the perfect space to get back to the core values of humanity, then Glastonbury 2016 was poised to do so.

In the week leading up to Glastonbury 2016 weather reports were mixed, though largely erred on the side of good news. There was an air of excitement among everyone I knew who would be attending: sunshine, or at least no rain, for the whole five days said some reports. Yay! Having had several deluges across the UK for the past few weeks, Glastonbury was already a bit of a mudfest before the gates even opened. As it got closer to the first day of the festival it was clear that we were going to have to deal with some serious sludge when weather forecasts finally managed to give us a more accurate view of the coming week and they all seemed to say that it would be raining. Boo!

So, with a sturdy pair of Wellington boots packed – among my fancy dress, waterproofs and other such festival essentials – off I went to Worthy Farm for a mud-filled adventure…

Was the Lineup Really That Underwhelming? 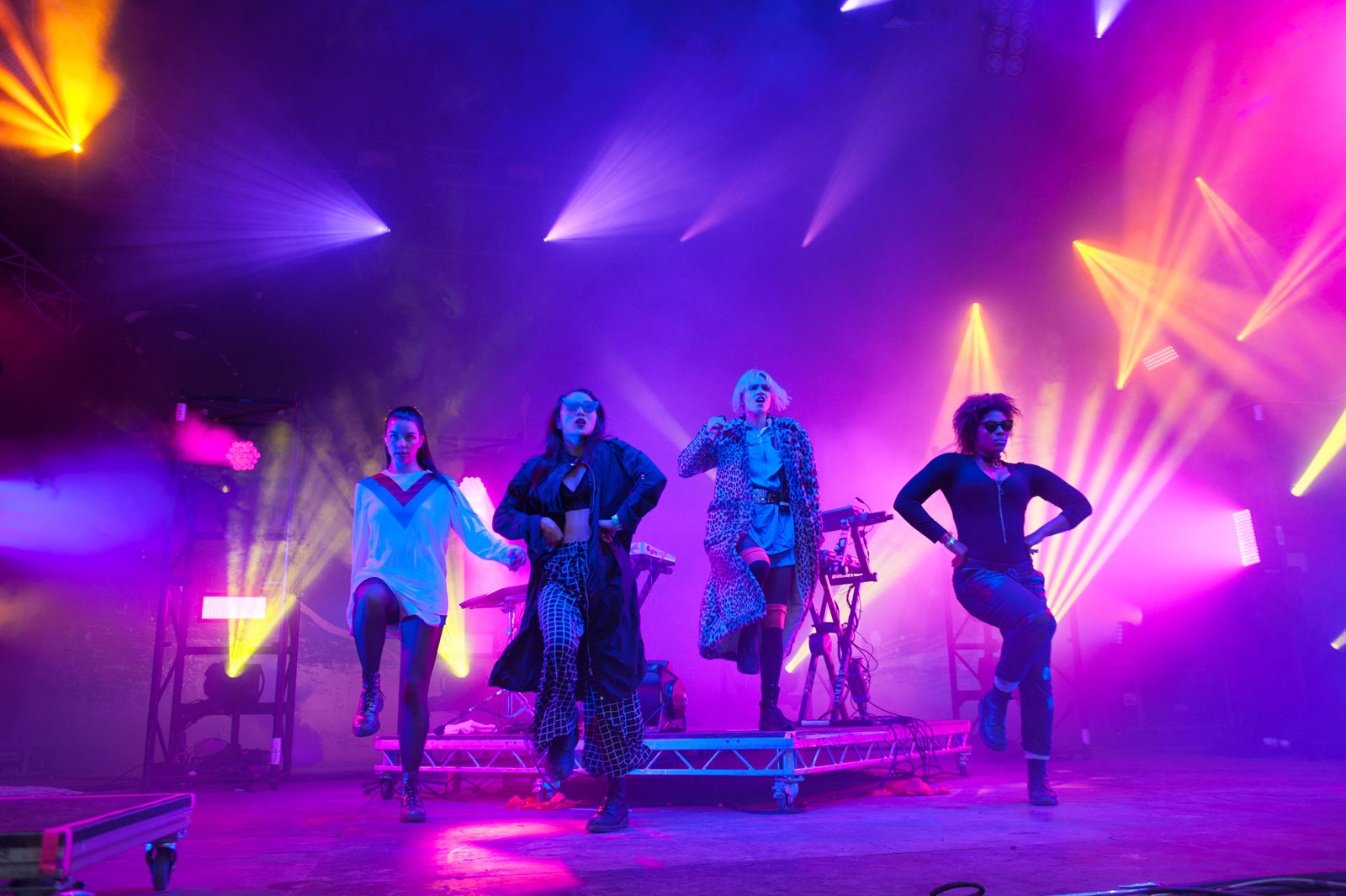 One of the main topics of conversation around this year’s Glastonbury was the underwhelming nature of the lineup (for some). There was no one of Beyoncé’s stature, or Lionel Richie, or Dolly Parton or The Rolling Stones. This is a criticism I chose to ignore. Yes, it’s true that there were not many huge U.S. stars but a quick glance at what all of the stages at Glastonbury had to offer more than made up for any lack of U.S. superstar talent. Our adventures at the festival took us from the Acoustic Stage, where legends like Art Garfunkel played to diverse, and totally enchanted crowds, to the mighty Arcadia spider , which is always a feast for the senses no matter who's playing.

On the Pyramid Stage alone, the diversity was incredible and perfectly curated and timetabled for each day. On Friday Rokia Traoré’s beautiful African rhythms were followed by grime king Skepta, who injected the crowd with scintillating energy alongside his Boy Better Know crew mates Shorty, Jammer, Frisco and many more. ZZ Top provided a great soundtrack to a late afternoon on one of the sunnier periods of the festival. Muse closed the stage on Friday to a rapturous response from the tens of thousands of fans in front of them.

Other notable highlights on the music side of things included Madness, Gregory Porter, Jeff Lynne’s ELO and the mighty Adele, who had the crowd in the palm of her hand throughout an endearing and polished performance. Spoken word artist Kojey Radical caused a ruckus in the Rum Shack on the Friday night, too, and Paul Carrack from Mike & The Mechanics was in tremendous form at the Acoustic Stage. 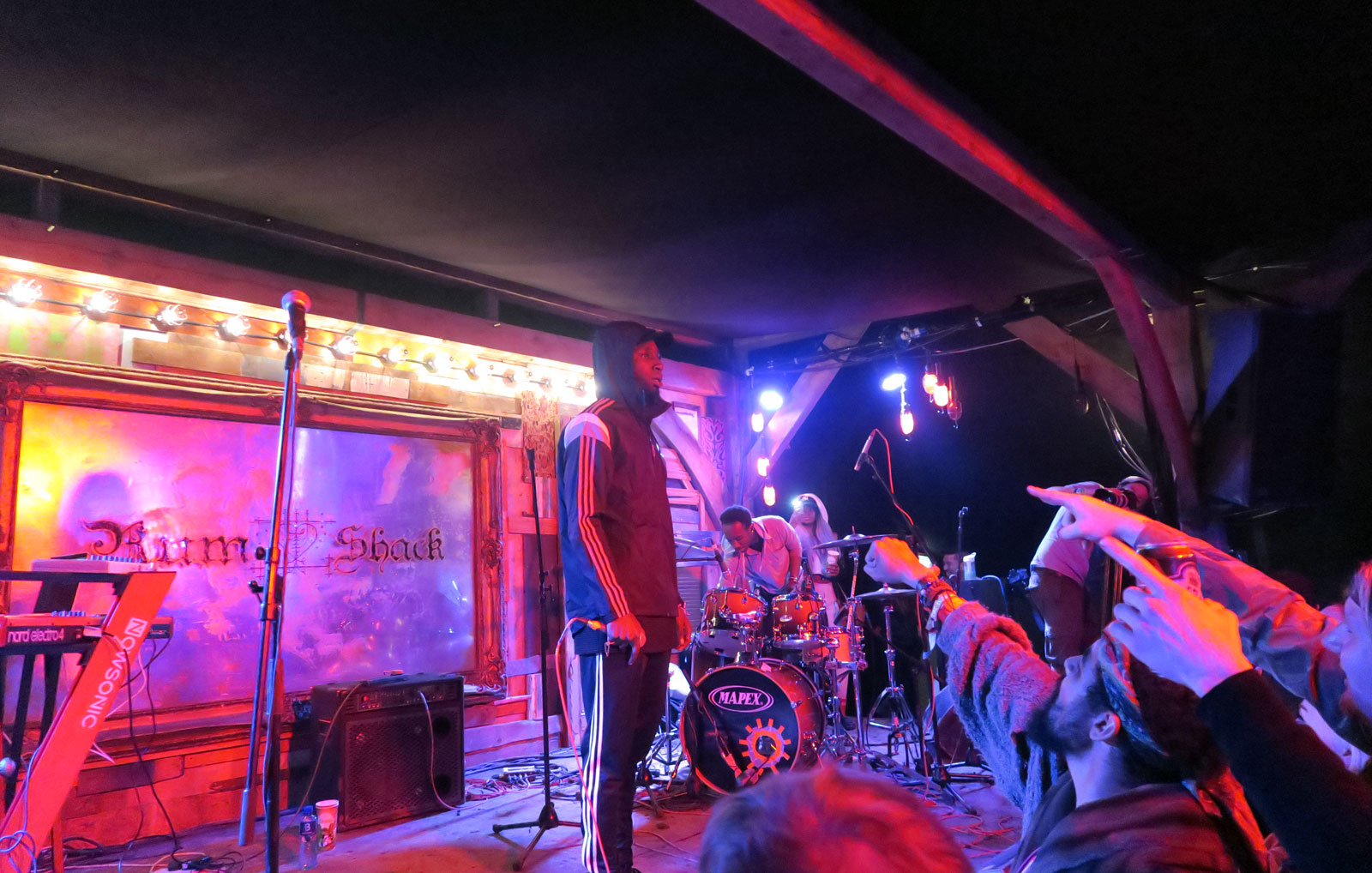 United Through Mud and Music

It was one of the muddiest Glastonburys in years. Like the Playa dust at Burning Man , Glastonbury’s mud is a great leveller. No matter whether you’re rich or poor, young or old, black, white, Chinese, Indian, Lebanese or any other race, religion or gender, the mud made us all equal. For some it was more of a struggle or annoyance than others, but the beauty of Glastonbury is that, in the end, you just get on with it and learn to embrace it.

Everyone has worked so hard to get to the festival that there’s no way they’d let some mud get in the way of a good time. Once you’ve traipsed from one stage to another, taking an hour longer than usual, you’re ready to party like there’s no tomorrow, to let loose and shake off any of the mud-induced angst you may have accumulated along the way. 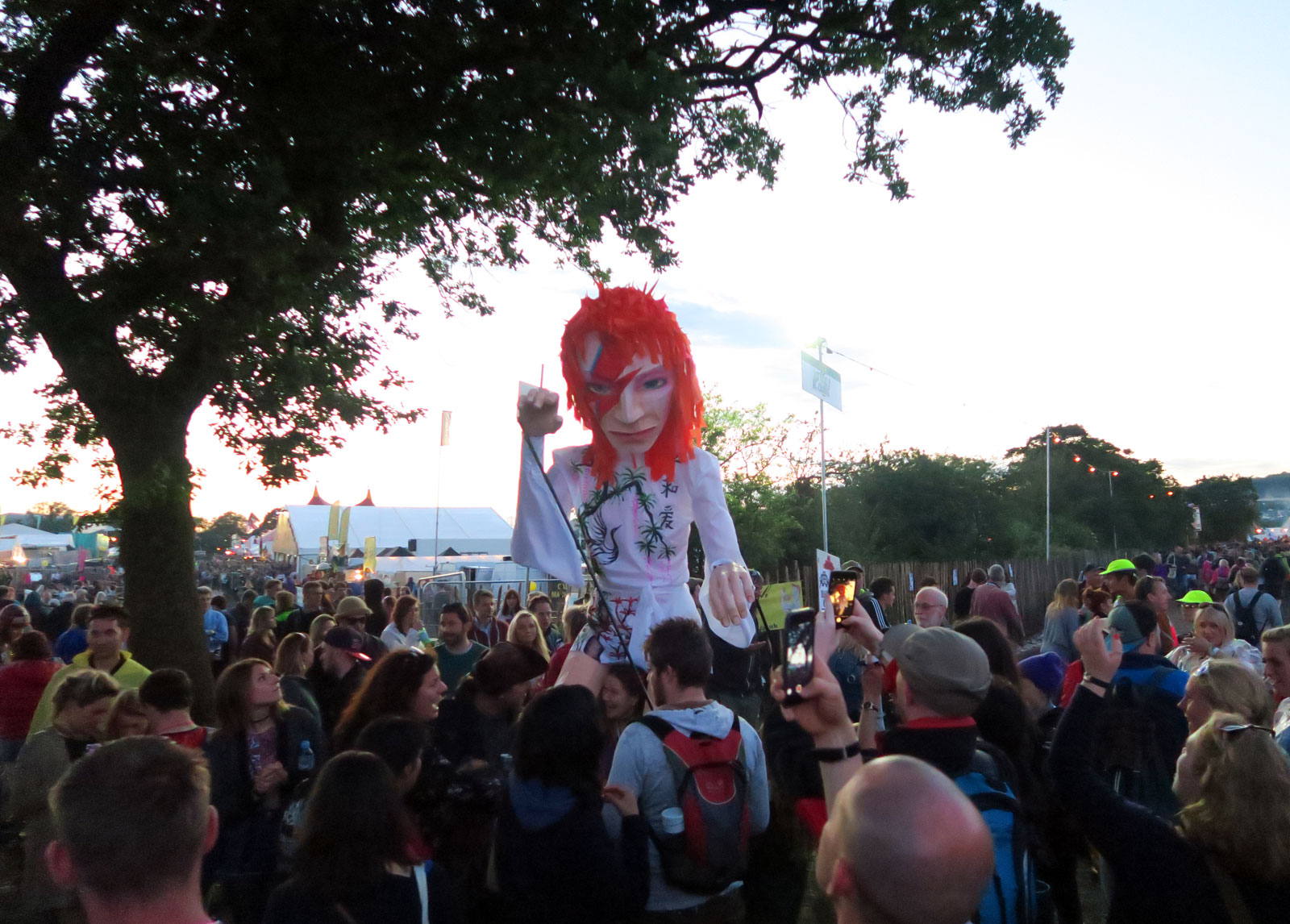 It’s not ideal, but it certainly seems to have been the catalyst behind a fantastic atmosphere. It was about as far from the seemingly divided society we being led to believe we have here in the UK as one could imagine. Smiles all round, strangers shoulder to shoulder sheltering from the rain, mud up to their knees, socializing with one another – no separation, just unity.

It made all the headlines and probably frightened a few people off, but the mud was the perfect antidote to the UK’s shocking "Brexit" vote. It was a result that will undoubtedly have serious repercussions not only for the nation’s global position, but also on the ground here in Britain, where the effects will be felt personally by many of those who are already in vulnerable positions. Perhaps if the UK were to be covered in a thick layer of mud for a few weeks we’d all remember how important a sense of community is to the progression of our society. As it stands, we appear to have regressed, which is a damn shame.

Glastonbury Truly is for Everyone 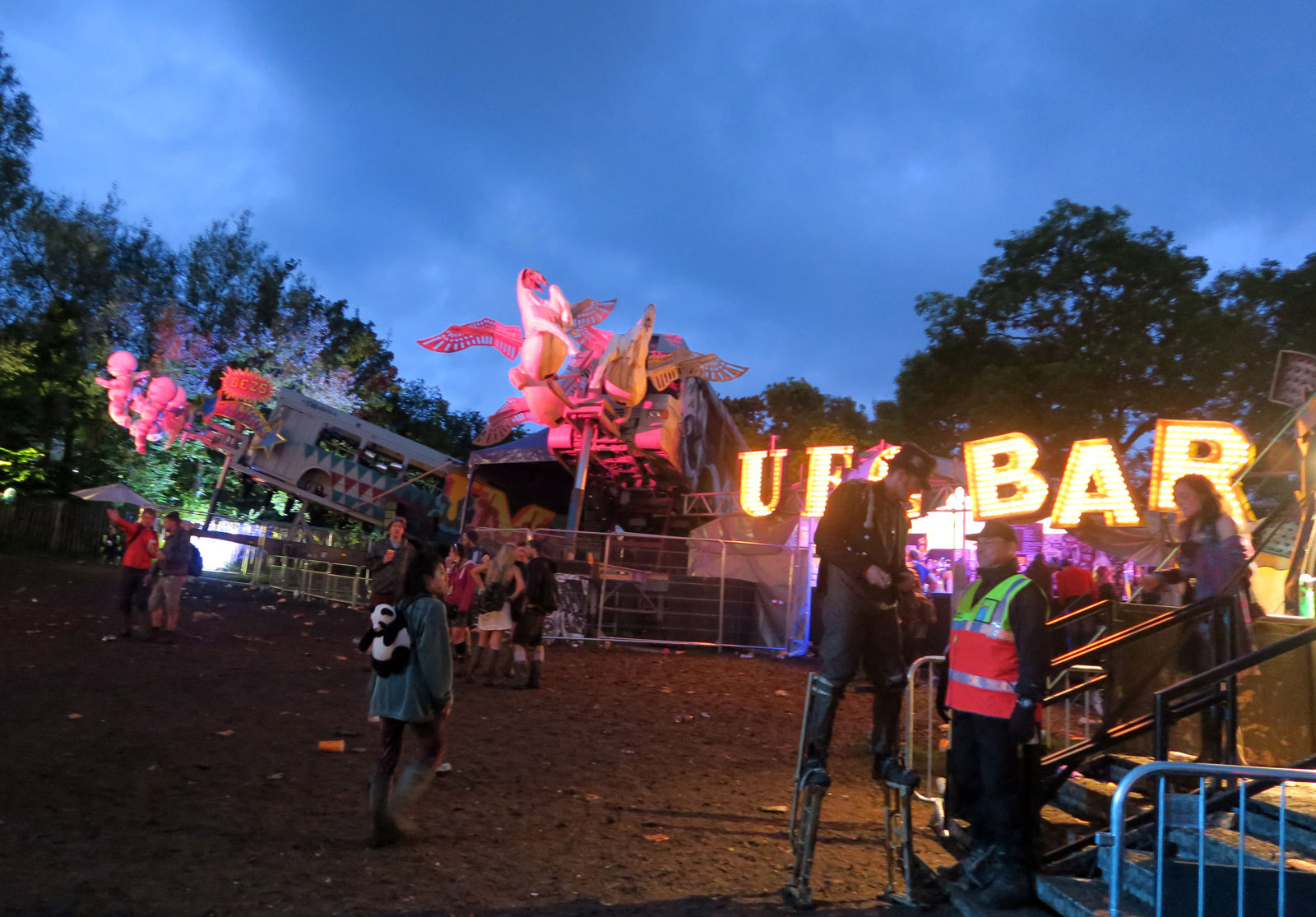 Due to its size, Glastonbury is able to cater to a very wide range of people. There are kids' areas, and plenty of families who make the effort to visit the festival every year. I met a 13-year-old who was there with her father and had been every year since she was a baby. In attracting generations of the same family to its event, Glastonbury grows with its festies; it’s part of their lives from a very early age and therefore instills its principles into those people.

I saw mothers and fathers battling to get their pushchairs through the mud, kids on shoulders, babies in harnesses. I saw lots of people in wheelchairs and older people riding around motorised vehicles – if they were stuck in the mud, strangers would immediately pitch in to help them on their way. People on crutches, people with walking sticks. When you see, or meet, people who have battled so much to get around the festival site, it inspires you and reminds you to keep on trucking.

Not once did I complain about the mud. I was at Glastonbury committed to making sure that my team had a great time from start to finish. The entire five days was spent with my partner in crime and her mother, who is 68. Several other friends, who are a similar age to me, brought their parents as well. That is such a rare thing to do at other festivals, which are mostly targeted at a younger demographic. 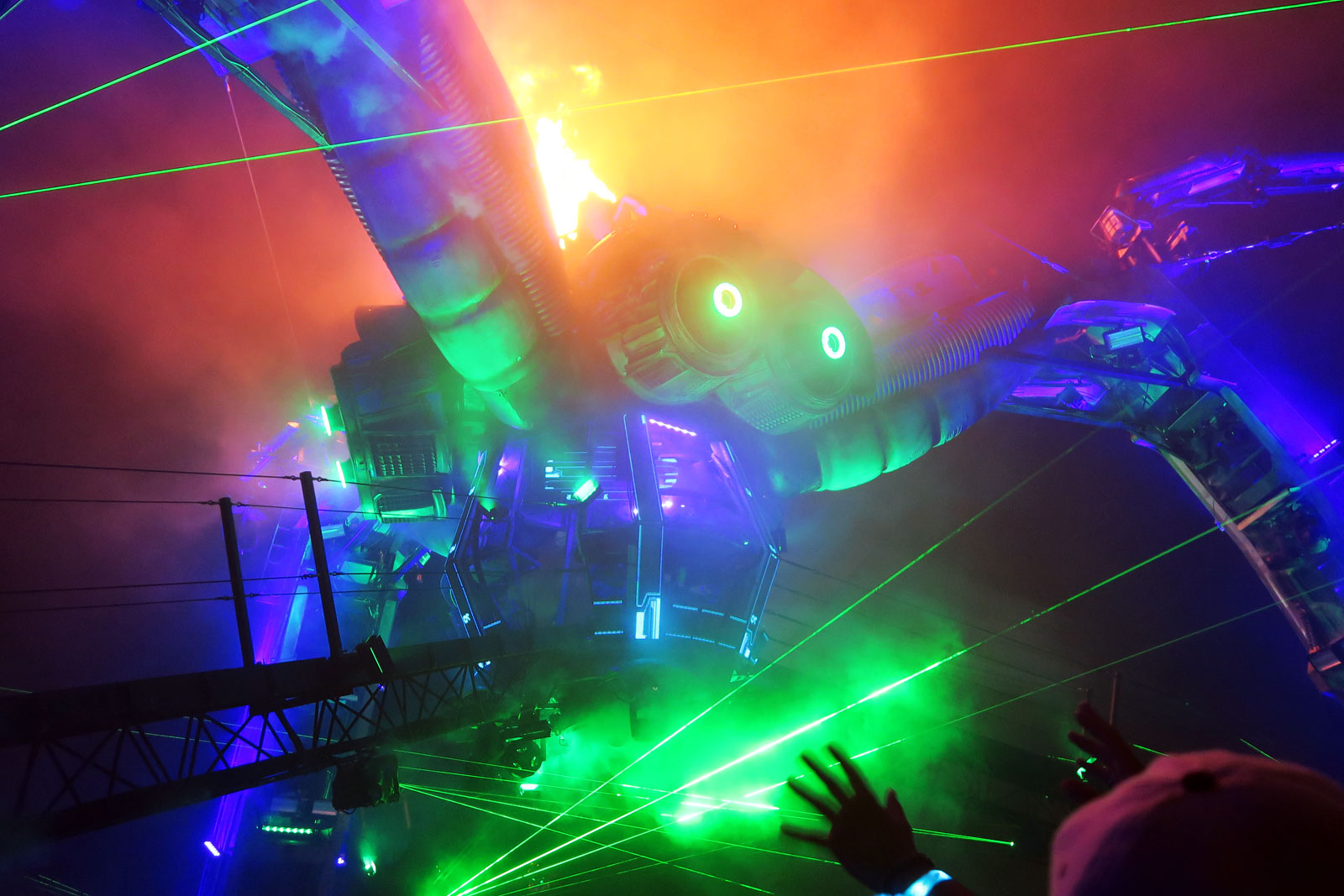 I met a couple in their 50s, named Mark and Julie, who met on Tinder and had been together for three years. Mark had been to Worthy Farm for the first time just before they met and, when they got to know each other, he told Julie he wanted to take her there the following year. It’s now one of their annual trips and part of the fabric of their relationship.

I partied with Dave, a fascinating man from San Francisco who’s been in the UK for 30 years and was celebrating his 70th birthday at Glastonbury. We watched LCD Soundsystem before hitting the Arcadia area and he told me all about his amazingly multi-faceted life. Dave was there with his two sons, again keeping generations of the same family tied in with the festival.

For years I avoided Glastonbury because I thought it was overhyped. I don’t regret missing out on all the previous years – it wasn't my time to go, but I am pleased to report that, after going to the festival two years running, I can happily vouch for it being one of the best music and arts events in the world, and somewhere that everyone (and their parents) should visit once in their lives.

Here's a picture of me with some friends enjoying the mud at The Other Stage... 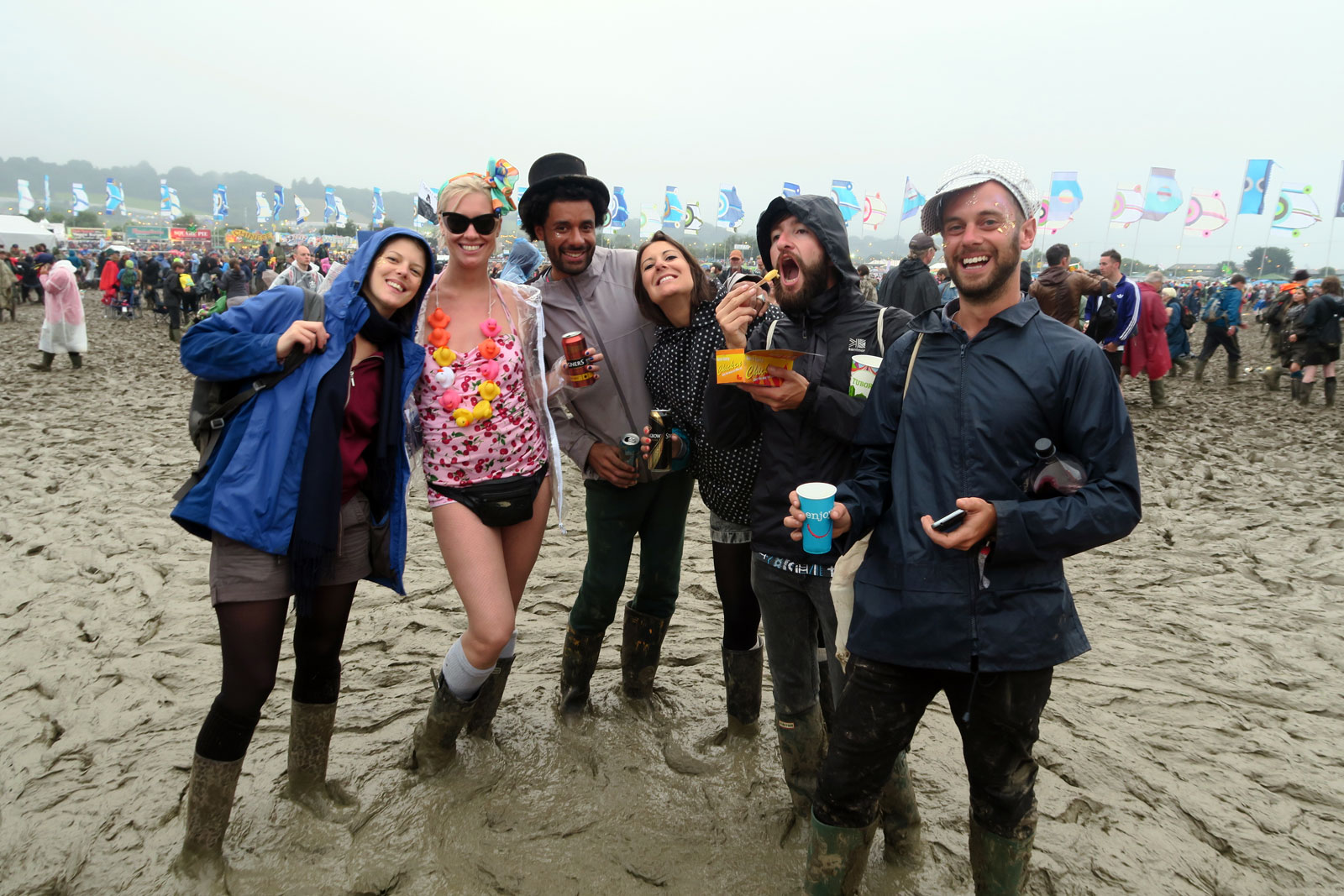